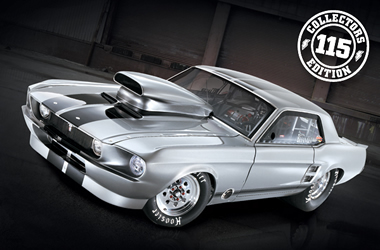 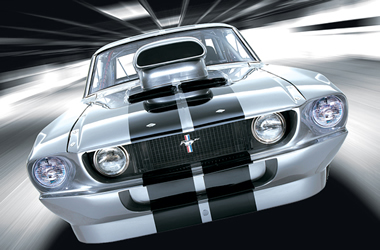 From nose to tail, this 1967 Mustang is a show-stopper. No corners were cut. It blends speed, power, quality, and style into one jaw-dropping package. And who’s the artist behind this masterpiece? Not a custom shop, just a fellow enthusiast with a whole lot of passion, determination, and motivation.

Need a recipe for aggression? Start with a muscular Shelby nose, a sleek front air dam, and a classic GT 500 hood. Then add a touch of race-proven performance with a Harwood Aero scoop. Finally, top it off with a pair of Shelby fog lights, an iconic tri-bar pony emblem, a quicksilver paint job, and a set of jet-black racing stripes.

Under the hood lurks a 572 cubic inch engine that generates a pavement crushing 900 hp and 850 ft.-lbs of torque. This powerplant draws its energy from a long list of performance goodies, including an Edelbrock Victor Ford 460 intake manifold, a Pro Systems Pro-Series Dominator 1,350 cfm carburetor, and a set of Jon Kaase Super Cobra Jet cylinder heads.

From the fabricated aluminum floor pans to the show-quality fiberglass dash, this pony’s interior is completely custom and ready for the track. Turn a handful of pins and the floor pans can be removed for 360° access to the transmission—now that’s some racing ingenuity! It’s also packed with precision racing instruments and components, including a Racedata I50 Plus digital dash display, Turbo Acton Cheetah SCS shifter, Biondo solenoid shifter, and Grant steering wheel.

When you’re finishing a quarter mile in 8.8 seconds at 155 mph, you need something to hold you in tight. That’s why Ken fabricated this 14-point chromemoly roll cage that securely wraps around his Kirkey Economy Drag seat. A G-FORCE 5-point harness and Phoenix fire suppression system keep Ken safe and IHRA legal.

That custom side exhaust is constructed of 2 1/2" tubing merged to a 4 1/2" Dynoflow collector for a thundering exhaust tone. The custom fabricated trim ring gives the exhaust a finished look and the jet-black side stripes add sinister style to the Mustang’s profile.

How do you harness the power of 900 horses? With a set of 15 x 15 Weld Racing Draglite 90 Series rear wheels wrapped with 32 x 14.50-15 Hoosier Drag Slicks. The monstrous wheel and tire combo is bolted to a custom built Ford 9” rear end with Strange Engineering 33-spline axle shafts and a Pro Drag Racing 4.29:1 ring-and-pinion set.

This story originally appeared in the Summit Racing catalog and first appeared on SummitRacing.com on 2/22/2010.

“When I pulled up to the burnout box, people grabbed their cameras. Tons of flashes were going off when I lit ’em up, lit ’em up big! Everyone went crazy!” Ken Belanger says with a smile. The memory was still fresh in his mind and the crowd’s response was the perfect pay off for completing his 1967 Ford Mustang coupe.

Ken sacrificed a lot of time to reach the finish line of this project. There were plenty of pitfalls and speed bumps along the way, but nothing slowed him down. He had a mission.

“I didn’t want to cut corners. I wanted it done right,” Ken said.

His final product is a just-right combination of race and show while holding on to the roots of a classic musclecar. Ken’s hard work didn’t go unnoticed at the 2009 Detroit AutoRama, where his Mustang earned the Best Super Gas Vehicle and the Most Outstanding Competition Vehicle awards.

Every gearhead remembers when they discovered their passion for speed. For Ken, it was a day at the track watching his cousin race.

“Just being at the strip, I caught the fever!” Ken said.

Years later, Ken discovered his drag car of choice—a ’67 pony that was retrofitted for racing in the early 1980s. For two seasons, this modest Mustang was his workhorse. Round after round, his passion for the sport grew. Before beginning his third season, Ken reached a turning point. “I was young and naïve. I made mistakes and eventually blew my engine,” Ken said. “But it fueled me to build something faster.”

He started on the ’67 by removing the body from the old roll cage and chassis. Ken already knew his way around a welder, so he began fabricating a new 14-point chromemoly roll cage from S&W.

“There was a lot of trial and error getting the cage and body to fit just right. I had a big pile of scrap chromemoly in the corner of my garage when I was done,” Ken said.

After wrapping up fabrication, he had Finish Specialties powdercoat the cage a vivid Metallic Silver. Next up was the chassis. Ken put a Mustang II style coil-over suspension up front with custom fabricated A-arms. Out back he added a beefed up Ford 9-inch rear end worthy of his engine’s power production. To up the ante on show-quality looks, Ken went a step further than most and had the chassis components powdercoated with a Silver Vein finish that contrasts the metallic cage perfectly. The Mustang’s equipped with Weld Racing Draglite 90-Series wheels wrapped with classic Hoosier slicks, so there’s only one place for the power to go—straight to the pavement!

With the cage and chassis complete, Ken recruited the help of his close friend Bob Clark for the paint and body work. From the custom front air dam to the shaved rear gas cap, Bob transformed Ken’s ’stang into a streamlined show stopper. And that Shelby front nose?

“Nothing beats that front end on a coupe. It’s so aggressive,” Ken said.

Well, we couldn’t agree more. To top off the pristine work, the Mustang was painted a striking Dupont Chromabase with classic dual black racing and side stripes.

Ken wanted the ultimate powerplant—one that could back up those aggressive looks—so he spec’d out all of the engine components and relied on his friend Joey Ciccalo to bring the monster to life. Joey took a Ford 460 block and an arm’s length list of performance goodies to produce a 900-horsepower, track-worthy engine. A set of custom headers from PF&E Exhaust Shop give the engine a bark as big as its bite.

With the exterior done and a powerplant firmly in place, Ken and fellow fabricator Steve Loef got to work on the interior.

“I can’t even count the hours we spent stuck in there,” Ken said.

But the end result was worth the struggle. From the custom aluminum floor pans to the sleek VFN fiberglass dash, it’s simple, clean, and complements the show quality exterior. It’s also packed with top-notch pilot toys—a Turbo Acton Cheetah SCS shifter, a Racedata I50 Plus digital dash display, and a Biondo delay box just to name a few. But the best interior feature is an added touch from Ken’s wife.

“She hid a lucky penny in there when I wasn’t looking. I have no idea where it is,” Ken said.

After completion, the Mustang was a far cry from what it once was. When Ken finally got to take his pride and joy to the track, it turned heads and got every bit of attention it deserved. And when the Christmas tree shined green, the Mustang unleashed a stampede of power and Ken reveled in the moment.

“In my early days, I got used to an eleven second quarter mile pretty quick. Going down to running mid eights, that really puts you back in the seat,” Ken states, “But it’s like my Dad always says, ‘there will never be a fast enough,’ and I couldn’t agree more.”

Ken Belanger transformed a classic muscle car into an award winning, 900-horsepower racing machine that’s equally at home in a car show and at the track. So what was his favorite part of the whole project?

“The support of my friends and family. I wouldn’t have made it to this point without them lending a helping hand and pushing me when I needed it most,” Ken said.

This show-stopping race car is a true testament that with a little passion, support, and good old-fashioned elbow grease, anything is possible.