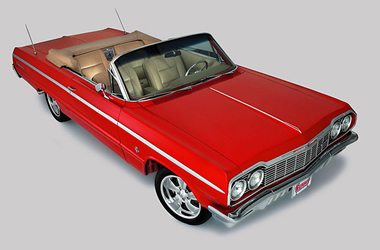 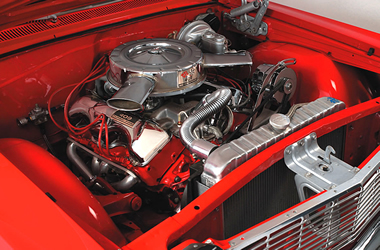 Impalas this nice aren’t built overnight! Tim, a trained Classic Chevy International judge, knows what it takes to impress the world’s most critical bowtie connoisseurs. In this case, it took 12 years of meticulous restoration with just a touch of hot rod attitude to get the job done. And what does a car like this score among the CCI elite? 950 points out of a possible 1,000.

If you ask Tim, there’s only one way to fill up a ’64 Impala’s big engine bay, and that’s with Chevy’s legendary big block; the 409. With the battery relocated to the trunk and the bulky heater core, air conditioning, and power steering completely removed, this garage sale find of the century is set like a 409-karat jewel underneath the hood.

Tim must be pretty familiar with the old saying “good things come to those who wait.” After the rest of the build was finished, he invested another six months in tracking down a set of wheels that perfectly complemented the resto rod feel of his Impala. These 17-inch Intro Twisted Vistas look right at home and at the stock ride height, you get to appreciate every last detail.

Tim left it to the folks at Portage Trim to wrap just about every interior surface in what seems like several square miles of luxurious cream and tan two-tone leather. The Billet Specialties Talladega III steering wheel, Hurst Competition/Plus shifter, and Sunpro console-mounted gauges let you know that this show-quality Impala has plenty of grunt to back up those good looks.

At 17 1/2-foot long you’d be hard pressed to find an unrestored Impala that doesn’t have a ding or two along those enormous fenders and rear quarters. But during the frame-off restoration, Tim discovered that this SS was more body filler than actual body, and that meant tracking down panels from more than a dozen different vehicles to get this big Chevy back on the straight and narrow.

No junk in this trunk, just more two-tone leather and custom “SS” emblem embroidery. Out back, the Impala leaves a lasting impression with LED taillights and a one-of-a-kind louvered bumper—believe it or not, Tim picked up the set at a local swap meet.

Destiny. Some people believe that all things and all interactions follow a predetermined path and you can’t change the outcome no matter how hard you try. The whole idea might sound a little far fetched, but if you’re Tim Tuel—owner of this incredible 1964 Impala SS convertible—you might feel a little different.

Tim developed his talent for turning a wrench while the rest of us were riding bikes and playing little league ball. At just 11 years old, he was up to his elbows reviving a long-forgotten ’38 Chevy buried in his neighbor’s garage. By 1987, he’d built an award-winning ’57 Chevy, after which he set his sights on an Impala SS convertible.

“I wasn’t actually planning on building another car after the ’57,” Tim said. “But an old buddy of mine had a beautiful ’64 SS that I always wanted to get my hands on. If I was going to build another car, it had to be a ’64 SS like his.”

And as fate would have it, that’s precisely what was waiting for him in a used lot 1,000 miles away from his home in Beloit, OH.

While vacationing in Orlando, Tim had gotten a hot tip from one of the local tri-five guys that his dream car was for sale just a few miles up the road: the Impala SS convertible from decades back complete with a 283 under the hood, Powerglide tranny, original top, even the jack in the trunk. “It looked like it just needed a coat of paint and a new set of wheels, and it’d be ready to drive,” Tim said.

But like all good hot rod stories, this wasn’t the case.

Eighteen hours of towing courtesy of the family van brought the Impala to its new Ohio home, where the restoration began in Tim’s modest 15-foot x 30-foot garage. Once he’d removed every nut and bolt, Tim sent the 30-year-old body panels off for a quick dip in an acid bath, only to discover that the fenders and quarter panels looked like a mile-long body filler buffet. Meanwhile, the frame was media blasted and painted to provide a solid foundation for the buildup.

At the end of the day, only the doors and hood could be salvaged, while the fenders, trunk lid, floor panels, and bumpers had to be tracked down and replaced. \

“In 1991 you couldn’t just call someone up to get parts for an Impala. Sometimes it would have to sit for months while I looked,” Tim said. “There are parts from at least a dozen states on this car and who knows how many different Impalas. I actually had to buy a whole parts car just to cut the tail section off and weld it onto mine.”

With the body and frame reunited on Tim’s home-built rotisserie, the rolling chassis spent the next several years bouncing from one shop to the next as the time consuming process of paint and finish work was exacerbated by a string of frustrating body shop experiences. But while the build appeared to be running out of gas, fate had another twist in store that was about to shift it into overdrive.

“My wife was looking through the newspaper classifieds and came across the strangest ad for a garage sale,” Tim said. “It read ‘Steubenville garage sale, Sat.-Sun., baby clothes, stove, pots and pans, 400 hp 409 engine with M21 trans.’”

It was a sign. Unable to pass up the idea of a 409 rumbling under the hood, Tim bought the engine and sent it to Rebco Auto Parts in Pittsburgh for a complete rebuild.

Staying true to Tim’s resto rod design concept, after the body was finished—complete with a fresh coat of Chevy Torch Red paint—he handed the Impala over to Portage Trim for a top-notch upholstery update that stays true to the original. The interior gurus replaced the aging top, recovered the original seats, and swathed almost every surface in luxurious cream and tan two-tone leather, while seamlessly integrating custom touches like the Hurst Competition/Plus shifter, Billet Specialties steering wheel, and a trio of Sunpro gauges in the console.

Over twelve years after the project began, the Impala finally returned to Tim’s garage where it all started, with just one more detail keeping it off the streets: the perfect set of wheels.

“In a car show, there are two things people really look at,” Tim said. “First is the motor, then the wheels.” And with that legendary 409 to compete with, there’s no surprise it took Tim another six months and 2,000 miles to track them down.

He found them at the Barrett-Jackson auto auction in Scottsdale, AZ, when a rep from Intro Custom Wheels offered him a stunning set of custom-made 17-inch billet aluminum Twisted Vista takeoffs that had been used in a photo shoot starring—what else—another 1964 Impala SS. Tim left Scottsdale with one heck of a souvenir!

Whether it was destiny or 12 years of sheer grit and determination, Tim produced one of the cleanest ’64 Impalas you’re likely to ever set eyes on. Now you can find it cleaning up at national and local shows throughout the Midwest.

“I think that the quality of the car really speaks for itself,” Tim said. “It’s about as perfect as I can get it.” We couldn’t agree more.

Special Thanks To: My wife Linda, and Gary Trusty for his exceptional paint work