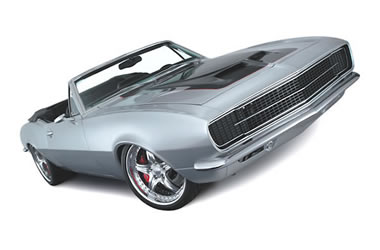 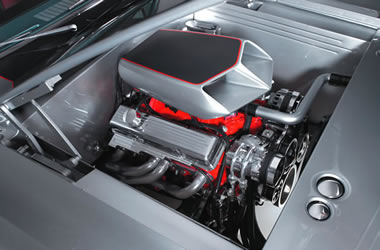 At its foundation, hundreds of hours of meticulous bodywork sets this ’67 apart from the rest. And according to Bob, getting the sheetmetal just right presented one of the project’s biggest challenges. “I’d estimate that we did about 800 hours bodywork, with 400-500 of those spent priming and block sanding,” he says.

Bottled up under the Yenko-style hood is a volatile mixture of show and go. To showcase the 475 hp Shafiroff crate engine, Bob used a custom-bent core support cover and inner fenders to hide the radiator, MSD ignition system, and battery. And you’ll need to find somewhere else to store your mittens, because the entire A/C unit was crammed into the Camaro’s glovebox!

Pony cars—even the legendary Camaro—were never known for their corner hugging prowess. Bob solved this 40-year-old cornering conundrum with a ShockWave suspension setup from Air Ride Technologies. Now he can get that aggressive drop at the push of a button, and the perfectly level stance makes the most of those ultra-sticky 235/35ZR19 tires in front and the 285/35R19 skins in the rear.

They say that you can learn a lot from someone’s shoes. If that’s true, then this wheel/tire/brake combo speaks volumes about Bob Bertelsen’s Camaro. Wrapped around those oh-so-sweet 3-piece iForged Trial 19” wheels are grippy BF Goodrich g-Force T/A tires. And if you ever catch yourself having a little too much fun, Wilwood stoppers at all four corners (14” discs with 6-piston calipers in the front, 13” discs with 4-piston calipers in the rear) are ready to reign in the ponies.

Take a trip out back and there’s still plenty to admire. A smoothed tail panel provides the perfect canvas for a custom billet fuel filler, flanked by set of Marquez Design LED taillights. Underneath, a tucked and narrowed bumper sits flush against the bodywork and the twin tips from a custom-bent 2 1/2” exhaust system provide the right soundtrack. Pop the trunk and you won’t find groceries; an Alpine CD/DVD system complete with a built-in LCD display wait inside.

See those inconspicuous triggers behind the leather-wrapped Momo steering wheel? Give ’em a squeeze and you’re shifting with Formula-1 levels of control, thanks to the Twist Machine paddle shifter system. Krist Kustoms in Fort Wayne, IN provided the stitch work, which was the only time the Camaro left Bob’s garage during the 9-month buildup.

You can’t take a 40-year-old Camaro from been-done to homerun without a well-laid plan, so Bob turned to Washington-based hot rod sketch artist Jason Rushforth to get some ideas down on paper. From the outside in, there were few changes between concept and reality.

When bare metal just won’t make the grade, car enthusiasts and commercial shops call up Bob Bertelsen— owner of A Plus Powder Coaters in Columbiana, OH—to transform it into something special. So when Bob applied this same idea to his 1967 Camaro RS convertible, it’s no surprise that it turned out tougher than a $2 steak with a look that sizzles. The project was an incredible 40 years in the making.

“On Christmas day of 1966 my dad left my mom a small present under the tree,” Bob said. “And inside was a brochure for a ’67 Camaro, since they hadn’t actually gone into production yet.”

Santa delivered the real deal several months later; a Butternut Yellow beauty with a 327 packed under the hood. The drop top RS pulled daily driver duty for Mrs. Bertelsen until 1973, when she moved on to a new Firebird and passed the Camaro keys down to the kids.

“My sisters and I all learned how to drive in this Camaro,” Bob said. “By the time we were done with it, we were driving around an old beater. The windows didn’t work, and the quarter panels and doors were rusted out and needed to be replaced.”

Finally, on Christmas day of 1991—exactly 25 years after his mother had been given the Camaro—the keys were once and for all handed down to Bob (talk about the ultimate regift!). Over the next year, Bob gathered up all of the necessary GM sheetmetal to fix the rust, dressed the RS in a fresh layer of bright aqua clearcoat, and hit the local show circuit. However, it’d be another 15 years before this build really got started.

In September of 2006, Bob caught wind that the next year’s Hot Rod Power Tour would be kicking off just down the road from his home, which gave him just enough time to tidy up before the big show.

“The original plan was to paint it, freshen up the suspension, and drop in a new transmission,” Bob said. “But with nine months to work, I decided to call up a hot rod sketch artist by the name of Jason Rushforth and ask him to come up with a few ideas. I really liked what he came up with, and by October I knew that I was facing a complete restoration.”

With the clock ticking, there was only one way for Bob to start his ground-up resto, and that was wheels-up on a rotisserie. He began by media blasting the Camaro’s undercarriage in preparation for the Chris Alston’s Chassisworks front and rear subframes and later, the Air Ride ShockWave suspension system. Meanwhile, Bob’s friend and neighbor Tom McKenzie fabbed up a set of custom wheel tubs complete with bead rolling along the center for added strength and discreet detail. Finally, the RS received a Speedliner spray-on undercoating before it was reunited with terra firma.

To keep true to the original, Bob and Tom used a light hand when it came to body modifications.

“The ’67 convertibles are just too nice to chop up, so my goal was to try to enhance the lines of the car without going overboard,” Bob said.

The result is nothing short of jaw dropping. Extending from the smoothed wiper cowl, a ’68 Yenko-style hood adds just the right amount of authentic attitude to the front end, and a custom billet aluminum grille insert was fashioned from an aircraft strut to perfectly mirror the narrowed bumpers front and rear. Just below, a custom front valance completes that menacing first impression.

The sides look slippery smooth thanks to the debadged fenders, Billet Specialties mirrors, and Buick LaCrosse door handles. Out back, a smoothed tail panel is home to a trick set of Marquez Design LED taillights and a custom billet fuel filler.

Once the bodywork was in the bag, Bob wrapped the Camaro in a coat of PlanetColor Quick Silver, followed by a custom blend of Chain Saw Silver and Gunmetal down the center, surrounded by a thick stripe of Lipstick Red to really set it off.

“I’m not even a ‘silver’ type of guy,” Bob said. “But I just love the way the color dances in the sunlight. Really, if I’d built this back in ’77, I probably would have just put some new sheetmetal on it, painted it red, and called it done.”

One thing that hasn’t changed over the decades is the pursuit of horsepower, and this Camaro’s found plenty of it. Pop the hood and you’re greeted by a custom fiberglass air cleaner cover that perfectly mimics the functional hood scoops. Dig deeper and you’re face-to-face with an UltraStreet crate engine from Shafiroff Racing Engines. At its center is a 406 CID Dart Little M small block stuffed with go-fast goodies like an Eagle crank and rods, Mahle forged aluminum pistons, and a COMP Cams Thumpr camshaft.

An Edelbrock Performer 800 cfm carburetor, Billet Specialties serpentine belt system, and a set of Canfield 72cc aluminum heads join the party to help produce 475 horsepower. Press the loud pedal and all of that oomph is sent to a TCI Super Street Fighter 4L60E transmission—complete with a slick Twist Machine paddle shifter setup—before it turns the massive iForged Trial 19-inch wheels.

From the outside and under the hood, the RS stays true to its roots, but jump behind the wheel and you’ll quickly realize this is where Bob left 1967 in the past. To get the right look, the last order of business was to trailer the Camaro from Bob’s garage in Columbiana, OH to Fort Wayne, IN for a two-tone interior courtesy of Krist Kustoms.

With Jason Rushforth’s original sketches as a guide, the interior shop dropped in a set of thick-bolstered front buckets and added a custom center console, rear seats, and door panels, then draped it all in black and red PlanetColor OptimaLeather. A Kenwood in-dash navigation/DVD system provides the in-flight entertainment (don’t miss its bigger brother in the trunk!), and mounted to the Ididit steering column is a leather-wrapped Momo wheel that frames a full complement of Auto Meter MCX gauges.

On June 2, 2007 at 11:00 pm—just hours before the Camaro was set to make its debut—Bob completed his nine-month sprint, transforming this hand-me-down hot rod into a show stealing soft top. And according to Bob it wasn’t long before the RS had a dedicated fan club: “Once I showed my mom how the Camaro turned out, one of the first things she told me is that she’d love to have it back.”

Special Thanks To:
Tom McKenzie, Rick DeSalvo, and Shayne Smeltzer