Wanna make jokes about the color of Al Stacko’s award-winning ride? You’d best bring your A-game material, friend, because he has heard them all and emerged unflustered.

“Some guys from the Rock-n-Roll Capital Street Machines car club and I were at Autorama one year, and I had stepped away from my truck for just a minute,” Al said. “Out of nowhere, the guys produced all these Mary Kay cosmetic products and set up a big display on the El Camino. I came back and thought it was pretty funny…until I saw the judges heading my way!”

Perhaps Violet Red Metallic is not an obvious first choice for the paint scheme on a burly Pro Streeter with the supercharged heart of a lion, owned by a life-long, “American Graffiti” style hot rodder. As it turns out, Al didn’t choose the color—the color chose him.

“It was this color when I first saw it at a swap meet back in 1997,” Al said. “Normally, I’m a Chevelle guy who wouldn’t give a second look to an El Camino, but that color caught my eye. When I got closer, I realized the body was in nearly perfect condition, which would shave months—maybe even years—off of any project for that car. Something about the way all the lines and slopes on the El Camino matched up struck a chord with me, too. Plus, the guy was selling it for a guy who was getting a divorce, so the price was good.”

Thus inspired, Al took the El home, where it became one of those permanent projects. Over time, doing virtually all the work himself, he stripped out the old, sub-par internals for performance upgrades, and the vehicle took on its Pro Street character.

In 2008, Al finally found a way to one-up the paint: the towering Chevy 468, topped with an 8:71 billet aluminum supercharger from The Blower Shop, and a double-barreled chrome scoop. Like a piece of fine art, the engine is surrounded by lots of open space for maximum admiration, thanks to Al’s trick install.

“First of all, I wanted no wires showing,” Al said. “That’s why they’re tucked underneath, and the distributor is hidden in back. By using solid motor mounts, I was able to bring the headers in tight, and frame-mount the Summit alternator. I also custom-made these hard fuel lines to follow the contours of the blower case.”

Al really beams about the hood opening, which he carefully crafted with a raised lip to follow the stock lines of the hood. It looks like it rolled out of the factory with a big hole in it just for a gigantic supercharger! When asked about the custom alternator bracket, Al swears us to secrecy.

“When you have a vehicle like this,” Al said, “it pays to be a really good neighbor. They don’t mind the rumble now and then.”

While Al has done most of the work on the car himself, he is quick to credit the Rock-n-Roll Capital Street Machines car club for the support, advice, and motivation.

“I first met them in 1999,” Al said. “I just kept seeing them at local cruises and car shows, and so I started talking to them, and the next thing I know I’m a member. They knew all the best local shops for specific jobs. Plus, we got to compete against clubs from other areas, where they had new and different ideas to inspire us.”

But Al’s favorite club functions always involve driving the El Camino, especially for parades and cruises. With its shocking paint, dazzling engine, and distinctive styling, the truck always invites folks along the parade route to crowd in for closer looks. “When they get too close, and the cruise gets slowed down, I just blip the throttle a bit, and the blast from side pipes makes them back up fast!”

As much as the El Camino evolved over the years, Al was changing right along with it. “I really found that I liked to get out, meet people, organize things, and solve problems,” Al says. “To help the club, I taught myself how to write better letters for sponsorship and donation requests, how to design signs and posters, and how to be an ambassador for the club and the hobby.” Eventually Al stepped up to become vice-president of the club, and in late 2010, became president.

In fact, Al is such a changed man that his club business cards and his show display identify him as “Al Camino.” Chevelles still hold a special place in his heart, and his latest project vehicle is a gnarly Mercury rat rod, but it is for the El Camino’s magenta majesty that he is best known. “It’s an unforgettable sight,” says Al.

Al knows the El Camino will never really be done. Every now and then he’ll get an idea, and just try it out. “I had some folks offer to airbag it,” he says, “but it didn’t fit the spirit of the project.” Someday, he might smooth out the rivets in the engine compartment and the bed, or make a few other changes, but one thing will never change.

“People have called me crazy, tried to talk me out of it, but the color is permanent. The kids love it, and so do the ladies!” 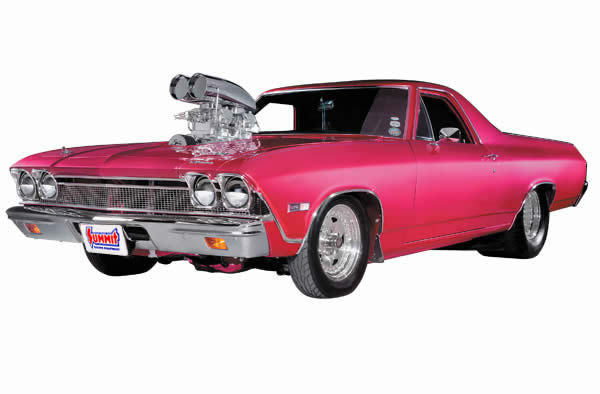 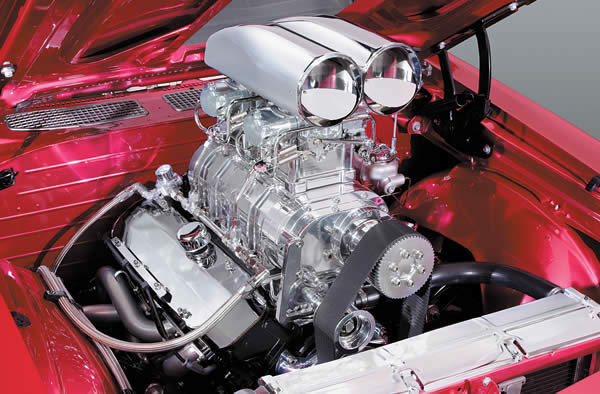 Is this the reason they call him Al Camino? Turns out it’s only part of the story. “For a while, my wife Cindy drove another 1968 El Camino, and I’ve owned a third. My wife and I went to a test-and-tune event and made a pass down the strip in side-by-side El Caminos, which was a lot of fun.”

Al’s goal in the engine bay was to provide maximum visibility for the Chevy 468, chromed Moroso valve covers, billet aluminum supercharger from The Blower Shop, and the chrome shotgun scoop. That’s why the wires are tucked away under the engine, hoses are kept to a minimum, and even the fuel lines are custom bent to follow the supercharger case. Solid motor mounts make room for the tight-tuck Hooker Super Competition headers and the frame-mount, reversed alternator.

“I don’t mean to sound like I’m kissing up, but the Summit race seats are the best I’ve ever used,” says Al. “They fit just right, and they’re comfortable!” RCI 5-point harnesses keep the Stackos secure in those seats, and Al monitors the vitals via Auto Meter Pro Comp gauges. Then, when the MSD shift light says so, he shifts the Turbo Action Cheetah SCS shifter. Al says the earplugs are there for two good reasons: “The left one is for the side pipes, the right one is for my wife! Ha!” No stereo here: you’d never hear it.

There’s plenty of go along with the show! The El Camino applies 850 horses and 715 ft.-lbs. of torque to the pavement through Mickey Thompson Sportsman S/R Radials. If there was any doubt, the Summit aluminum fuel cell and twin battery boxes solidify the El Camino’s Pro Street cred.

You’ll have to ask Al himself about the origins of this frame-mount bracket for the Summit one-wire alternator, because we’ve been sworn to secrecy.

Al describes the El Camino as an “ongoing adventure.” Not only is he always looking for new things to try out on the vehicle, he loves meeting new people and cruising to new places. Of all the trophies he’s won over the years, the biggest thrills come from the Kid’s Choice contests. “You’d think they’d pick a fancy feature car near the front of the show, so it’s a great honor when they remember the El Camino further back,” says Al.

One fateful Super Summit, the Rock-n-Roll Capital Street Machines were parked right next to the Summit Racing trailer. After a quick downpour, Team Summit Pro Stock driver Greg Anderson made the mistake of standing around watching while Al and friends were drying off their cars. Al flipped him a towel, and Greg was happy to pitch in!

Greg also autographed the underside of the hood.