The 1962 C-1 Corvette—it was the final edition of the first generation of American sports cars to carry the famed crossed flags, and the first ride to put a serious grip on Ron Robinson’s 13-year-old imagination.

Then one day, their neighbor pulled up next to them in a Honduras Maroon 1962 Chevy Corvette. That four-speed fuelie only had a 327, but it left the Ford fastback in its dust and made a powerful impression on Ron, too.

Jump ahead more than 40 years and check out the gorgeous 1962 Corvette sitting in Ron’s driveway now. The stunning fiberglass roadster took five years to restore, and when we say it’s better than ever, you better believe it. Ron skipped the numbers-matching route and combined elements from some of his favorite Corvette models to build his ultimate dream car. Here’s the best part: he did it all (with some help from his friends) as a present for his ultimate dream girl—his charming wife, Cheryl.

It seems the transitional styling of the 1962 Corvette tugged on Cheryl’s hot rod heartstrings at an early age as well.

“When I was a young girl, my uncle took me for a ride in a new Corvette. He was a vice president at GM and brought a lot of nice cars around, but that ’62 was something special,” Cheryl said. “I just love the looks of the original front end combined with the newer tail section.”

The couple attributed their shared passion for ’62 C-1s to nothing less than fate, and Ron set out to find a Corvette to fulfill the couple’s custom-car destiny. An Internet search revealed a mostly complete car in California, so Ron bought it and had it shipped back to his Michigan home.

Like a lot of other guys, Ron honed his mechanical skills through the years, messing around with an assortment of go karts and mini bikes, eventually graduating to more substantial iron, like a Tri-Five Chevy, a ’57 Ford, and three other Corvettes (a ’59, ’65, and a ’66). Even with all of his experience, he was a little surprised by the roadster’s (lack of) drivability.

“I had totally forgotten about my ’59’s ill-mannered handling, and the brakes on those cars, well don’t get me started!” Ron said.

Ron’s first order of business was to ditch the C-1’s stock suspension and brakes. His plan to add the road hugging suspension from a ’91 ZR-1 plus C-5 calipers and Porsche 13-inch drilled rotors would require more than a just little help. Ron knew just what to do—he called on his good friend and master fabricator, Ernie Miyamoto.

“Ernie is a wizard with a welder and the best man I know to transform my ideas into metal,” Ron said.

Ernie grafted the new running gear onto the Vette’s factory chassis and gave it the four-inch ride height with just a touch of rake that Ron requested.

“I’ve learned by trial-and-error that your oil pan and crossmember need four inches of ground clearance or the Michigan streets can be trouble,” Ron said.

Unfortunately, the C-1 arrived from California with a body that was, to be kind, in C-minus condition.

“When I got the car, it had so many waves, my friends asked me if it came with a surf board,” Ron said.

Ace body man Billy Biggs dove in, and when he was finished, the waves were gone and the car was wrapped in a perfectly executed 50th Anniversary Corvette Red paint job. Biggs also incorporated Ron’s requests for styling mods that turned the historic hot rod into a modern day masterpiece. Flush-mount door handles from a 2000 ’Vette look right at home on the gracefully sculpted doors and the hood has been fitted with the center section from a 1966 C-2 big block to make room for a GM 502 engine.

Like any sane car guy, Ron changed his mind about the 502 just days before the Corvette’s debut at the Detroit Autorama.

“Sure, the GM 502 is a great engine, but we needed to pull out all of the stops and go really big,” Ron said.

So it was out with the 502 and in with a GM 572 c.i.d. big block, stuffed to the gills with go-fast goodies from Scat Engine Components, Ross Pistons, and Jesel.

“We did the entire engine swap in one night, and we didn’t even remove the hood,” Ernie said. “But I have to admit, I was scared the cherry picker was going to tip over and ruin the paint job.”

Not satisfied with simply stuffing a big engine in the car and shutting the hood, Ron gave the big block’s valve covers and air cleaner a competition-inspired carbon fiber treatment.

“My friends told me not to do it, but man, it sure looks cool,” Ron said. The powerplant also has ceramic-coated 2 1/4-inch headers, exhaust cutouts, and countless billet engine brackets that add to the clean custom look and are all products of Ernie’s extensive fabrication skills.

They say it’s what’s on the inside that counts, and the roadster’s interior is nothing short of splendid. A Colorado Custom billet steering wheel on an Ididit column plays in perfect harmony to the beautiful ultra silver pearl leather upholstery and light gray wool carpet. Inside the ’Vette’s space age-inspired dash is a complete set of Dakota Digital gauges, and a Vintage Air climate-control system keeps the cabin comfy on those hot summer cruises.

A car represents a lot of things to a teenager: freedom, adventure, unlimited possibilities, and entry into the adult world. To a driver with a few more miles on the odometer, cruising with your best girl at your side in a hot rod you built with your friends is bound to make you feel like a kid again. Now it’s time for Ron and Cheryl’s neighbors to stare in envy as they tool by in their ultimate Corvette. Nice work, kids. Nice work, indeed! 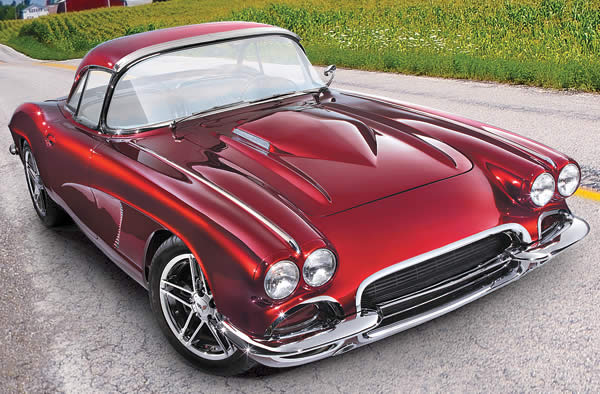 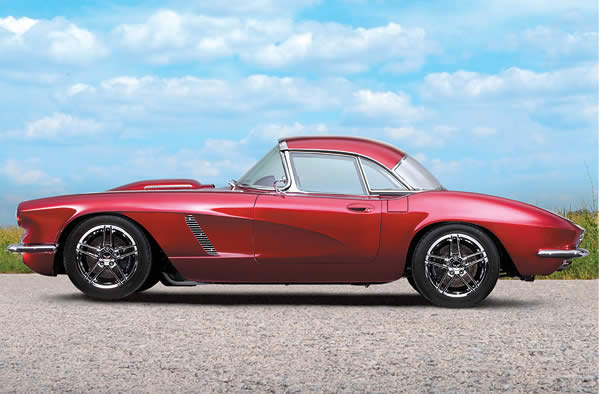 It’s hard to believe, but the Corvette’s mirror-smooth fiberglass body used to have more waves than the Pacific Ocean. Ron added the center lump from a ’66 Corvette big block hood to give the 572 engine some much-needed breathing room.

“I’ve got a convertible top for the Corvette, but I love how the silhouette of the removable hardtop works with the car’s exterior lines,” says Ron. The hardtop’s original clear Plexiglas quarter windows were replaced with tinted glass to match the side windows.

There’s not an inch to spare in the exquisitely prepared engine bay. Somehow Ron and his friends found room for the GM big block, a huge power brake booster, and a Vintage Air A/C compressor!

The roadster’s interior has plenty of glove-soft leather, billet accessories, and a complete set of Dakota Digital gauges. A Long shifter connected to a Richmond 6-speed has Ron and Cheryl swapping gears with ease.

Talk about the shape of things to come! The 1962 Corvette’s transitional tail section was a hint that the new Stingray was on its way. The roadster’s custom stainless steel exhaust system exits with authority underneath the original two-piece chrome bumper.