Inspiration can strike suddenly like a bolt of lightning from a clear sky. Just ask Gary Hoffman.

Gary’s been building and customizing hot rods for over 40 years. He’s well known on his local scene for his super-clean resto work and paint expertise, especially his 1961 AMC Rambler American convertible. He knows what he likes, and he knows that rushing through projects is not the path to perfection.

One day in 1991, at a car show in Columbus, OH, Gary noticed two entirely unrelated cars in different parts of the show. One was a 1941 Bentley Mark V with a two-tone green paint scheme. The other was a disassembled 1957 Del Rio—Ford’s “sport wagon” response to the Chevy Nomad. The Del Rio was a California car in primer with all the body work already done.

That’s when the “Eureka!” moment happened.

“I was thinking about a project for my upcoming retirement, something different like a wagon. I thought the Del Rio would fit that bill, and it would look good with those Bentley colors,” Gary said.

A cagey car trader, Gary kept an eye on the disassembled Del Rio for years, before finally acquiring it in 2001. He thought he’d have nothing but time in his retirement, but other projects kept getting in the way. It wasn’t until 2009 that motivation showed up, and that motivation had a name: Greg Hoffman, Gary’s son.

You may remember Greg from his own extraordinary project car, a 1966 Ford Mustang.

“I helped Greg with a few things on his Mustang, mostly the paint,” Gary says. “And since he lives nearby, I could always call him up to lend a hand with my previous cars. Then, he got this idea for us to park our two Fords together at shows, so he lit a fire under me.”

The exterior was in great shape, but putting all that heavy metal back together turned out to be quite a challenge, so Gary called his son over quite a bit. Thing is, when Greg would come by, he’d lend more than just a hand. He’d lend a few opinions, too.

“I’d finish up with a part of the car, and it looked good enough for me, then Greg would come over and tell me it didn’t look right.” Gary said. “He wouldn’t let it go until I did it his way and he was happy.”

Gary admits: “He was usually right.”

All the pestering drove Gary to make the Del Rio uniquely his, starting by renovating the two-piece rear tailgate to power open. Emblems, hood, and door handles were shaved, but the rest of the trim was carefully restored—especially the gold-anodized rolled aluminum side accents—to maintain that distinctive Del Rio look.

Inside, Gary made great use of the generous space for some subtle modifications.

“I hid the A/C under the dash, which meant I had to move the wiper motors—plenty of room for all of that!” Gary said.

He hid all the controls under the dash lip, and then filled it in and smoothed it out.

Under the hood resides a 1969 351 Windsor engine, equipped with a Lunati Voodoo camshaft, an Edelbrock 600 cfm electric choke carburetor with the glossy EnduraShine finish, and a few other trick elements. The result: an engine with the perfect blend of power, cruising comfort, efficiency, and a jewel-like gleam. After all, this is no trailer queen—Gary built it to drive!

Once Gary wrapped the Del Rio in that Bentley-inspired two-tone paint job (with the light Alpine Green and darker Verdant Green), the father-and-son Ford show was ready to roll. Immediately, they got a great response, but folks kept asking: which came first—Gary’s green Ford, or Greg’s?

“We get asked that a lot. Truth is, we each came up with our ideas separately around the same time,” Gary said.

Indeed, side-by-side, the cars are clearly on different palettes.

Like Greg, Gary refuses to trailer his car to shows.

“I worked to make the ride nice, so I’m gonna enjoy it,” Gary said.

So far, he’s averaged about 2,000 miles a year, with only one incident: a deer strike just a few weeks before we took these photos. Fortunately, the wagon looks show-ready, thanks to a lot of help from his friends. And some extra pestering from Greg. 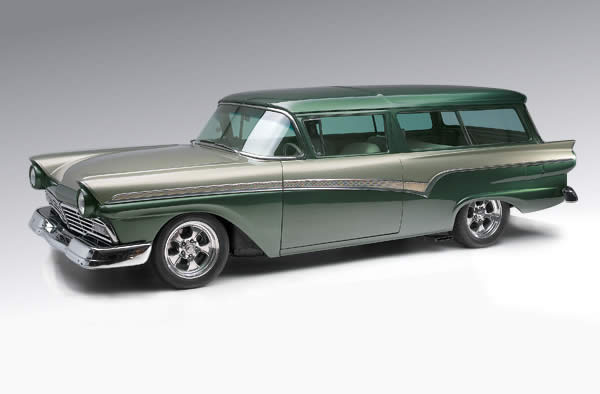 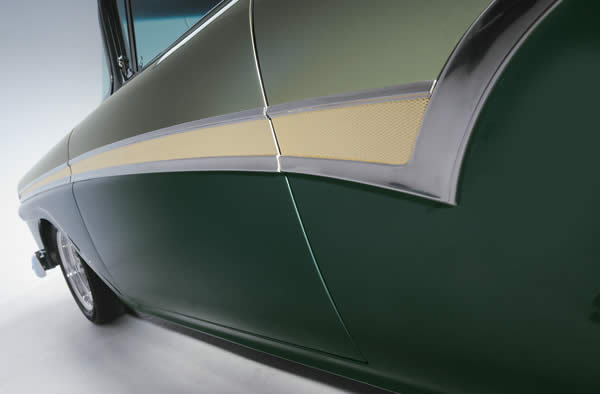 The Ford Del Rio was only made from 1957 to 1958. It was based on Ford's utilitarian Ranch Wagon, dressed up with special trim and interior options to compete with sport wagons like the Chevy Nomad. It's best recognized by its two-tone paint and gold V-shaped trim.

Have you noticed the flood of orange cars out on the car show scene? While Gary was a fan of the color (he even painted his house orange once), even he had to admit it was time to try something cooler. To maximize the green to be seen, Gary shaved the door handles, hood, and emblems, but to retain that distinctive Del Rio style, Gary had the rolled aluminum side trim meticulously re-crafted.

Gary made great use of all the space inside for some subtle modifications. "I hid the A/C under the dash, which meant I had to move the wiper motors-plenty of room for all of that!" All of the controls are hidden under the dash lip, so he could fill in and smooth out the dash.

This 351 Windsor was transplanted from a 1969 Ford, spruced up with parts collected over the years, including billet valve covers with billet breathers, an Edelbrock EnduraShine carburetor, K&N air cleaner, and a March pulley kit. "I got the polished aluminum manifold at a swap meet, not sure who made that," he admits.

Gary is especially proud of his renovations to the tailgate. "The original mechanism was pretty awkward, so I used some electric motors to make it power open." Because it's so hard to find, the factory match green carpet was only used in the trunk area.

Look for Gary's Del Rio parked next to his son's Mustang at a car show near you. If there's a sign that says "Don't Disturb The Bear" posted, that means Gary is taking his nap out back, so come back later to heap some praise on him.