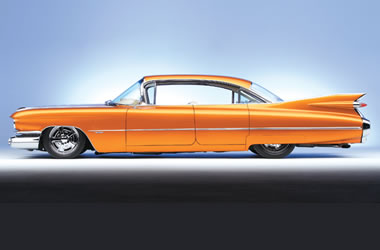 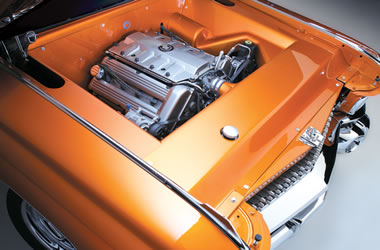 Killer looks and plenty of heavy metal, too! The sedan is so long you might think the front and back bumpers are in separate zip codes. The Caddy’s perfectly executed bodywork and low-flying altitude (with a hint of nose-down hot rod attitude) are a winning combination in anyone’s book!

Stuffing a fuel-injected Northstar V8 into an engine bay this big had to be a breeze, right? “Not so,” says Tom. The chassis and suspension had to be modified and even the sequential manifold had to be turned 180 degrees to face forward. Custom underhood body panels secured by Dzus fasteners add a competition-ready look to the Caddy.

Jan wanted a car with a lot of trunk space, and that’s just what she got! Even with the sedan’s massive stereo amplifiers and subwoofers in residence, she still has plenty room for about a month’s worth of groceries, a ton of car show gear, or all of those trophies.

A Budnik steering wheel on an Ididit tilt column and a power 60/40 bench seat provide a comfortable perch for the driver and plenty of leg room for anyone riding “shotgun.” Creature comforts like yards of fine leather, a rocking satellite sound system, and a Vintage Air climate control system make the miles fly by.

The Cadillac’s chrome and stainless steel trim work is a perfect complement to the stunning Candy Tangerine paint job. The sweet citrus hue was not Tom’s first choice, however. “I tried a Robin’s Egg Blue from the original 1959 color chart, but it made the car look like a bass boat,” Tom said.

This Caddy can pull it’s own weight thanks to the removable trailer hitch that Tom fabricated. “My plan was to paint our WaveRunner to match the sedan, but Jan wasn’t keen to have her pride-and-joy Cadillac backing into the water at the boat slip,” says Tom.

This story originally appeared on SummitRacing.com on 4/9/2010.

Daily drivers are like opinions, everyone has one, and some are better than others.

We’re betting you’d be hard pressed to find a regular ride as nice as Tom and Jan Stepp’s beautiful 1959 Cadillac Series 62 sedan. From the 4.6L Northstar engine under the mile-long hood to the stratospheric tail fins, this fully customized Caddy is one big, bold piece of American iron, and thanks to the Michigan couple, it has a new lease on life along with a dual personality.

The story begins back in 1994. The Stepps had a collection of performance toys that would turn any gearhead green with envy; a pair of V-Twin motorcycles and a ’29 street rod with over 100,000 miles on the clock. But Jan longed for a project car with some serious displacement—in the trunk, that is. She spied another Series 62 at a show and she was convinced it had the cargo capacity to handle everything from groceries to a ton of luggage. Tom stepped up to the plate and drove home a mostly-complete 1959 Sedan he purchased from the King (well, actually it was a local Elvis impersonator) as a gift for Jan on St. Valentine’s Day.

Unfortunately, the brutal Michigan winters had left their mark on the sedan as it was showing every one of a 125,000 hard miles through its battle-scarred white paint. “The car was pretty crispy and it looked like a giant rusty refrigerator,” laughs Tom.

The couple devised a two-pronged approach: restore the Caddy’s classic good looks to a show-stealing level of perfection and install modern running gear and creature comforts so the car would be as much fun to drive as it is to look at. “I figure we’ll put another 100,000 miles on this one, so modern equipment is a must,” Tom said.

“The car has so much style on its own, I wanted any mods to enhance its personality, not change it. Low, smooth, and cool was the look we were going for,” Tom said.

To Tom, the motivation for choosing the 1994 4.6L motor is easy to explain. “You don’t see many hot-rodded Cadillacs and you never see one with a Northstar engine,” Tom said. Plus, the fuel injected powerplant’s combination of performance (300 horsepower) and great drivability was just what the couple was looking for.

Ironically, turning the Northstar 90° (from its normal east-west orientation) to face due North in the sedan’s engine bay was not a simple task. Tom machined a special aluminum adapter plate to mate the TH-700-R4 automatic transmission with the modern Caddy block. The lower control arms and steering linkage were modified (to clear the oil pan) and almost all of the engine’s accessories had to be relocated. Even the Caddy’s crossmember had to be cut and reengineered so the engine would sit low enough to close the hood.

Restoring the ’59’s seemingly endless expanse of sheetmetal was a massive undertaking. “The rocker panels are over nine feet long,” Tom said. “That means you need a 10-foot bending brake to make the replacements.”

Some parts, like new “ice cream cone” taillight flairs were pretty tough to find, but eventually the Caddy’s exterior was better than ever, sporting filled and smoothed body seems, shaved door handles, and a frenched antenna port.

To get the car’s show-stealing finish started, Dan Armstrong (Slim’s Bodyworks) laid out two coats of PPG Silver. He followed with four coats of Candy Tangerine, and then applied four coats of clear—that’s a grand total of seven gallons of PPG paint! The results are simply mind blowing; deep, flawless, smooth as glass, and ready to face serious car show scrutiny. The finish was also formulated to be easier to repair, a real necessity when you expose a ride this gorgeous to regular roadway abuse.

Back in the day, the Caddy’s factory suspension offered the ultimate luxury ride, but now it was tired and outdated. A modified four-link suspension system, Currie 9-inch rear end, and heavy-duty sway bars revive the ride. An AccuAir suspension control system along with Air Ride Technologies air springs and Lincoln Navigator position sensors provide the necessary altitude adjustment. The Caddy rolls down the highway on a rocking set of chromed Budnik Muroc 18-inch wheels wrapped with grippy Nitto NT 555 rubber.

Open any one of the four mammoth doors, slide in, and your senses are met with the luxurious feel and aroma of the Caprone leather upholstery. Up front, the heated bench seat has been given the 60/40 treatment so Tom has ample legroom while Jan is behind the one-of-a-kind Budnik steering wheel and Ididit tilt steering column. The leather-covered dashboard houses the original wide-sweep speedometer along with a set of Haneline gauges, and a Vintage Air climate-control system keeps the couple comfy during those long summer cruises.

“I love electric blues and classic rock,” Tom said. The Alpine CD/satellite stereo system keeps his favorite tunes pumping through custom speaker enclosures that are mounted on the floor. “They face up to the passengers just like the stage monitors at a rock concert,” he said.

There’s no doubt about it—stealing the spotlight at a car show or racking up about 4,000 miles a year on the highway, Tom and Jan Stepp’s hot rodded Cadillac has plenty of star power (and a whole lot of trunk space for groceries and luggage). It’s equal parts road warrior and custom car show idol, with a little rock and roll attitude mixed in for good measure. That sure sounds good to us!

Special Thanks To: Doug Klann and the crew at Slim’s Bodyworks, Wayne Bloomfield, Al Bergler