The ponycar-era effectively began when the first Mustang rolled off the assembly line in 1964. It unceremoniously ended in the mid-1970s with the passage of stricter emissions laws and the demand for smaller, more fuel-efficient cars.

Ironically, it’s those same compact cars that have ushered in a new era of high performance—as evidenced by cars like Mike Gbur’s 2000 Civic Si. “It’s the modern day Mustang,” Mike said, referring to his Si. “And now it’s my dream car.”

Before he could make such a bold comparison between his Civic Si and Ford’s quintessential ponycar, Mike knew he’d have to be able to back it up. The Cheswick, Pennsylvania resident had the Honda’s stock 1.6L outfitted with Darton cylinder sleeves, then had the cylinder head ported and polished to pave the way for some serious power.

Inside, the engine was given a brand new rotating assembly, including an over-balanced crank, JE pistons, and Crower rods. The top end of the 1.6L was upgraded with a Crower camshaft, Ferrea valves, and Crower valve springs, retainers, and locks. A Edelbrock intake manifold feeds the powerplant with air and fuel—and lots of it. The entire fuel system was enhanced with higher flowing components, including a Venom fuel pump, AEM fuel filter, regulator, and fuel rails, and a set of oversized fuel injectors.

The motor and fuel system rebuilds set the stage for the crown jewels of the engine compartment: a GReddy turbocharger and Zex nitrous system. The dual power adders, with the help of an AEM engine management system, combine to help the little 1.6L put out around 600 horsepower. A Fluidyne radiator and GReddy intercooler keep everything running cool.

A turbo exhaust manifold, 2 3/4-inch stainless steel exhaust system, and Thermal Research cat-back B-pipe muffler push out the exhaust gasses. An ACT clutch kit and Quaif limited slip transmission makes good use of the horsepower, sending the power out to a Nitto/Axis Touring Cup tire/wheel combination. A set of AEM brakes—13 1/2” up front and 11 1/2” at the rear—bring the car safely to a stop. The Si’s handling is provided by a Neuspeed coilover suspension system with Neuspeed race coil springs, Bilstein shocks, and 19mm rear sway bar.

Outside, Mike retained the factory wing but added a full Kaliminari body kit, PIAA HID lights, and assorted graphics. He also had the fenders rolled to accentuate the low profile look, then covered the whole thing in bright Blue Electron paint.

Nearly 40 years after the first Mustang hit the streets with an affordable price tag and tons of performance potential, automotive manufacturers like Honda are using that same formula to inspire a new era in high performance. And after looking at Mike Gbur’s 2000 Honda Civic Si, we can only hope it lasts. 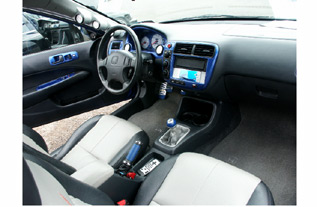 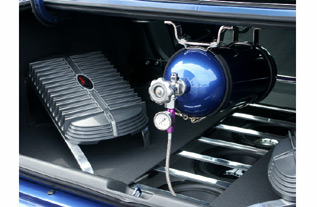 That's entertainment! Whether he's laying down the power or catching a movie on his DVD receiver, owner Mike Gbur can do it comfortably on the inside of the Si. Inside the car's roll cage, you'll find Classic Soft Trim upholstery, Auto Meter Phantom Series gauges, and a kickin' stereo system with dual amps and triple 10-inch subs.

No groceries in here. The Si's custom trunk is stocked with all the essentials: nitrous bottle, amps, recessed subwoofers, and 16 sets of neon lights.

It's fast, it's low, it's Mike Gbur's answer to the old fashioned ponycar. "It's the modern day Mustang," Mike said.