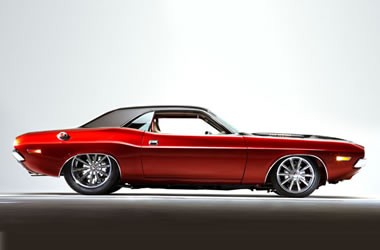 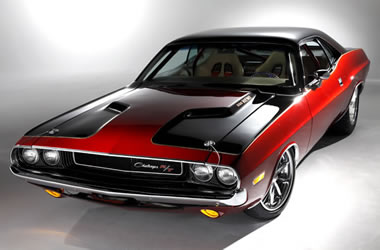 Bob liked the way his 1970 Challenger looked from the factory. He left the body alone and chose a paint scheme to highlight those trademark lines. About that missing mirror on the passenger side? “It didn’t have one when I bought it and we just didn’t put one on,” Bob said. “It wasn’t intentional, that’s just the way it was so we left it alone.” Bob’s years at the track show in details like the custom designed Coddington wheels. He worked with the guys until these 1-offs were just right—reminiscent of race wheels from the ’60s and ’70s, with a 10-spoke update and plenty of polish.

Instead of painting the hood’s center black, Bob took a different take on the classic paint scheme. He had the Candy Apple Red run up the center of the R/T’s hood, with the Black Cherry on the sides—it brings out the character in the hood and gives the Challenger an even more aggressive look.

The hood isn’t writing checks that the engine can’t cash. Lurking underneath that fancy hood is a 550-cubic-inch Hemi capable of 810 horsepower without a drop of nitrous, and about 1,300 horsepower with a shot from the NOS Pro Fogger system. When you have bragging rights like that, what better way to say it than some hand-applied variegated gold leaf?

Yep, it’s outrageous. Bob wasn’t messing around when he said his car would have a really big engine. This dressed-to-impress Hemi was stuffed with performance goodies and dyno’d by Koffel’s Place for rock solid performance. It’s topped with an Indy Cylinder Head 426 intake manifold and an air cleaner custom designed by Bob. “I needed something that would fit under the hood so I grabbed some sheetmetal, fabbed one up, and had it etched, powdercoated, and striped,” he said.

It may be an award winning show car, but this Challenger means business on the road and at the track, too. The roll cage, Simpson five-point camlock harnesses, and fire extinguisher remind you that there’s plenty of motor to back up those looks. It’s a classic racer’s cockpit, all dressed up (in Austrian leather and gleaming chrome) with somewhere to go.

Bob wanted clean, classy accents for the doors—nothing over the top. These Paul Atkins pieces have a race car carbon fiber/mesh look with that showy edge.

To win the award, you have to consider every detail. To win the race, you have to have the right parts. Form and function meet inside the Challenger's trunk. Bob designed this fuel cell wraparound to hide the components for a clean, show-worthy look.

With those big meats and that super tough rear end, the view from behind is all business. For a clean look, Chris Dixon of Wounded Knee Motors cut and customized the rear valance to get those tailpipes tucked up and centered. It’s one of the few body modifications that Bob made, and it looks like it should have come that way from the factory.

“I knew it had to have a big engine…” Bob Motz said of his 1970 Challenger R/T, “…and I wanted it to be different. I’ve seen my fair share of Chevy 350s and ’Cudas. They’re nice, but I wanted to have the car that you don’t see at every show and it had to be done right,” Bob said.

You’re looking at Bob’s final creation: an award-winning, done-to-spec show car with an all-out Pro Streeter attitude to back up those pretty looks. From the built Hemi and super tough FAB9 rear end to the paint job, custom wheels, and gold leaf detail, every step of this build was influenced by Bob’s experiences as an enthusiast, and his appreciation of classic musclecars.

Bob’s love of big engines and fast cars started a little more than four decades ago, when he was at a drive-in and someone in a beefed up muscle car peeled out, lit ’em up, and shook the windows of the car he was in. He was instantly hooked.

Over the next few decades, he spent a lot of time at the dragstrip, building and racing cars, and rubbing elbows with legends of the sport. When the Hemi came out and dominated the track, Bob was there. He witnessed Sox and Martin in their heyday, and it was a great time to be a Mopar fan. In fact, the trailer that Bob bought to take this Challenger to those far away car shows belonged to Ronnie Sox. “I told him I’d buy it if he autographed it,” Bob said as he showed off the big signature on the cabinets inside.

It’s no surprise, then, that Bob knew the “really big engine” for this project would be the ultimate Hemi, but first he had to find a car worthy of such a powerplant. After about six months of searching, he found a rusty old Challenger that needed an engine and some TLC. He completely disassembled the car and sent it to Rocky’s Auto Body for major restoration and repair. For this old school hot rodder, it was very important that the car remained true to its original form.

“Too many people change these cars so much that they don’t even have the same lines as the originals. That’s not my style. It looked great then and it looks great now,” Bob said. “Chrysler did a fine job, don’t mess with a good thing.”

The custom blend PPG Candy Apple Red bottom and Black Cherry top highlight the bodylines that Bob’s so fond of and he had the paint scheme on the hood flip-flopped (black on the sides and body color up the middle) from the usual look to help show off the hood’s attitude. Before Rocky’s got to the clear coat, Bob had local artist Dave Knepper add a custom touch that makes this show car “done right.” A stripe of variegated gold leaf separates the two colors around the body and highlights the detail on the hood and air cleaner. In the sun, that 550 Hemi graphic on the hood lights up like a neon sign in Vegas.

Under that fancy hood, there’s an all-aluminum Keith Black Hemi that’s been worked over by Koffel’s Place for a window-shaking 810 horsepower and 745 foot-pounds of torque. That’s without the nitrous. Add a shot from the NOS Pro Fogger 2 system and you’re looking at approximately 1,300 horses. The Hemi’s stuffed with all kinds of go-fast goodies and it’s topped by an air cleaner that Bob fabbed up from a spare sheet of metal. “I needed something that would clear the hood so I found a piece of sheetmetal and designed this air cleaner,” Bob said. Now that’s some good old-fashioned car guy ingenuity.

Advanced Chassis installed a 12-point chromemoly roll cage, crossmembers, frame supports, and motor mounts. Out back, the Challenger has a custom-fabricated FAB9 rear end, built tough to handle all that power, and to make room for those extra big tires. “It’s not common, and it’s more of a tough Pro Street look than you usually see,” Bob said. To enhance your view of the Challenger’s back end, Chris Dixon of Wounded Knee Motors cut and customized the car’s rear valance so those tailpipes are tucked up and centered.

With the body and paint, engine, and chassis work done, Bob had the Challenger on the car show scene for about five years. One day, he came in second to a car that just shouldn’t have taken place over the Challenger. Bob took a look at his car, and at the winning car, and made a to-do list so that wouldn’t happen again: interior, wheels, AirRide suspension.

Bob got to work, going back and forth with the folks at Boyd Coddington Wheels to design the perfect 10-spoke, race-inspired wheel. The end result is a Pro Streeter-meets-show car design that sets the mood for the entire car.

The interior went from mostly stock to show-winning style, courtesy of Paul Atkins Interiors. Just like the car’s bodylines, Bob wanted to keep the inside as clean and simple as possible—no TV screens or in-your-face technology—just the elements necessary for the cockpit of a racecar, with an extra touch of class. Underneath that gorgeous Austrian leather is a pair of Summit Racing Sport seats, and the Simpson five-point camlock harnesses remind you that you’re looking at an 810-horsepower street machine.

Remember how Bob left the Challenger’s bodylines alone? Well that paid off because in 2007, Chrysler invited Bob and his Challenger to display in the booth at the SEMA Show in Las Vegas, to kick off the 2008 Challenger. “To see this car sitting next to the new Challenger was really something,” Bob said.

Bob and the Challenger have been taking the car show circuit by storm. The list of awards goes on for miles with dozens of Best in Class awards from ISCA-judged shows across the Midwest, but they don’t stop there. At the 2008 Mopars at the Strip in Las Vegas, NV, Bob took home the prestigious World’s Ultimate Mopar award sponsored by Barrett-Jackson, plus Best of Show, and the Mopar Muscle Editor’s Choice Award. Well done Bob.

Special Thanks To: My friend Lance