Welcome to the 2019 Muscle Car Match-Ups which we’ve dubbed the “Limited Edition” Edition.

1. We know what at least some of you are thinking.

“OMG. U guys r dum! I can’t believe you didn’t include [Insert Missing Vehicle here]!!!1!” We hope you’ll trust that we do our best to not irritate you. We want you to like us so that you read our stuff and participate in our shenanigans.

2. Why only “limited edition” vehicles?

Because this is the seventh year of Muscle Car Match-Ups, and every year it gets progressively more difficult to come up with an original idea.

3. You can vote for your favorites a couple of different ways:

Basketball fans get the big college tournament every year, so it’s only fair that gearheads get our annual Muscle Car Match-Ups. We picked some spectacular limited-edition muscle cars, and it’s up to you to decide who comes out on top.

This is the first round of a four-round 16-car tournament field that your voting will whittle down within about the same timeframe as the NCAA March Madness tournament, which we shamelessly ripped off when creating MCMU.

The only wrong answer is no answer.

Here are your 2019 first-round match-ups below. 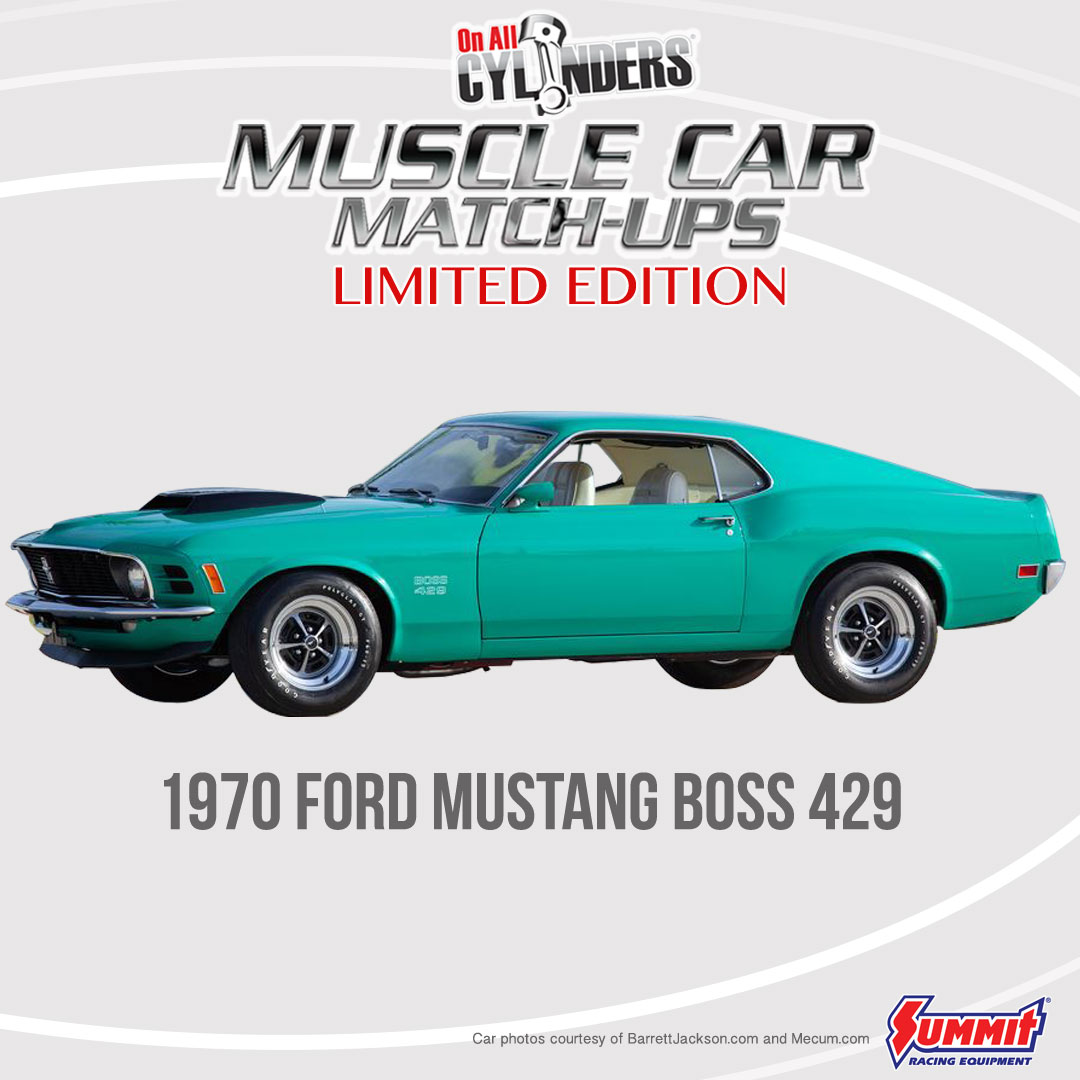 Is the Boss 429 Mustang the single most-beautiful car body in automotive history? At least one member of our staff thinks so. 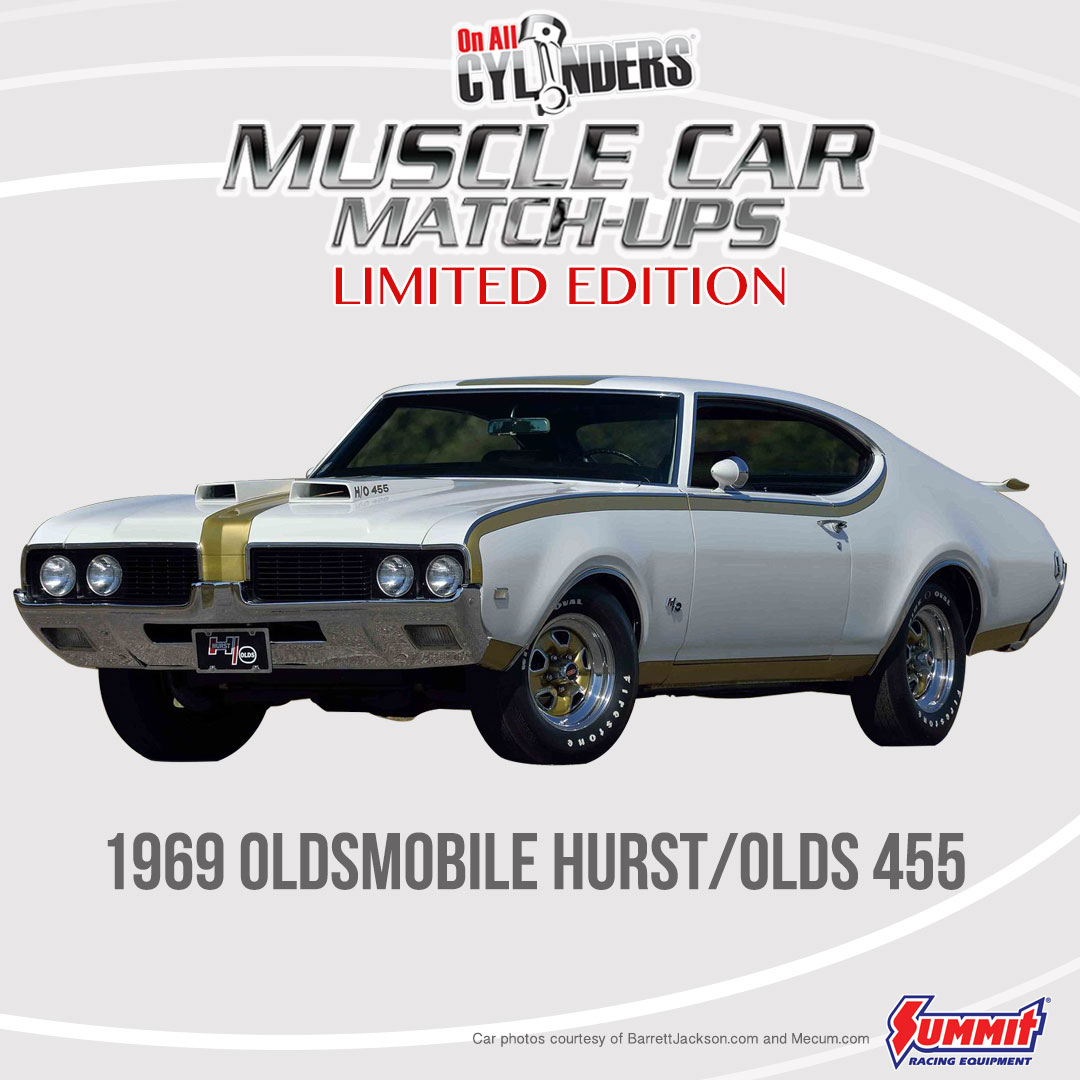 Of course, that iconic Firefrost paint job on the Hurst/Olds is surely amazing enough to make more than a few people think it should win a vanity contest with the Boss. Of course. But most of you won’t be thinking about vanity at all.

Both cars are legends. But really, every car in the field is. Who wins this match-up? 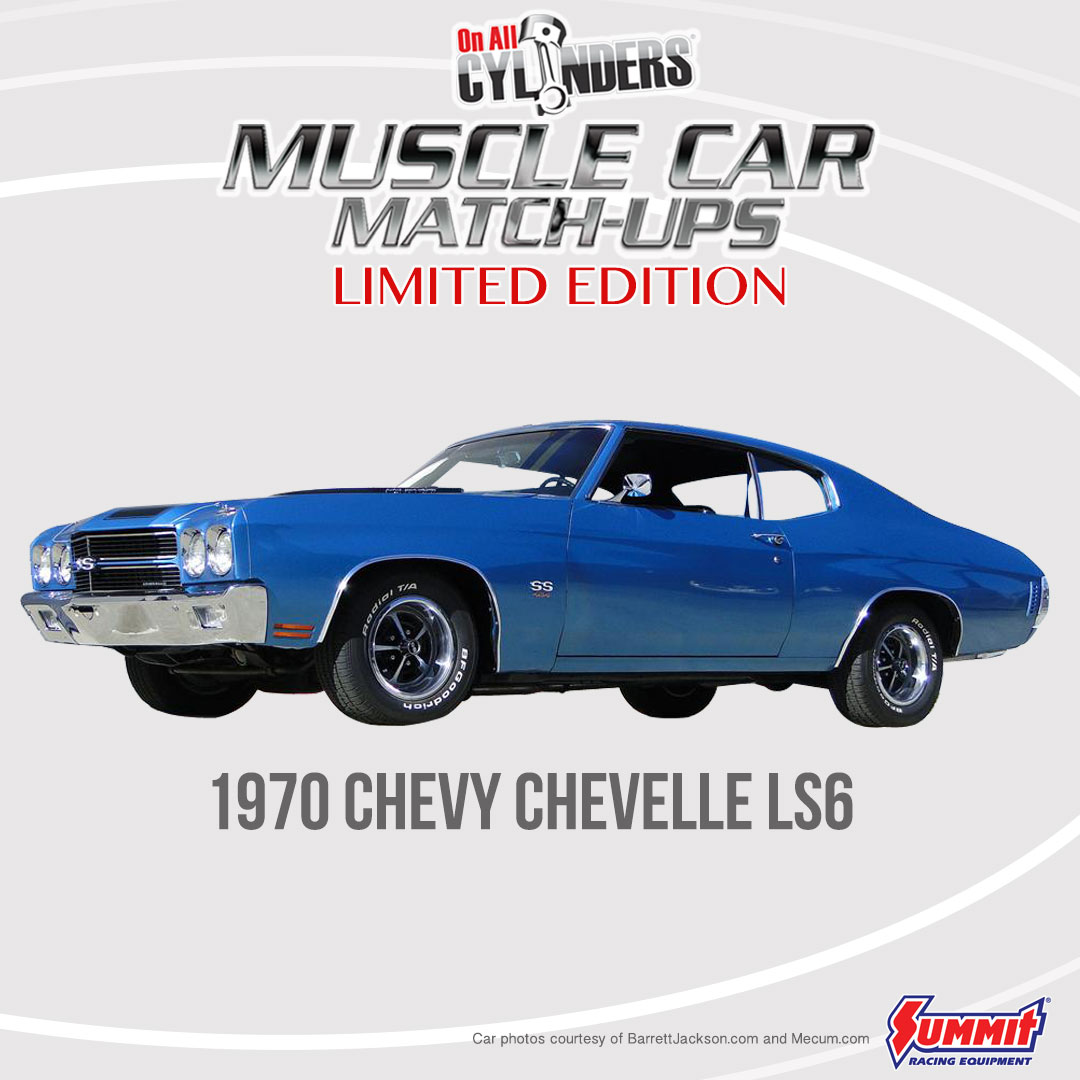 For 1970, Chevrolet lifted its cubic inch ban on midsize cars. And then they stuffed a 454 into a Chevelle. The result? What might be the poster child for American muscle. 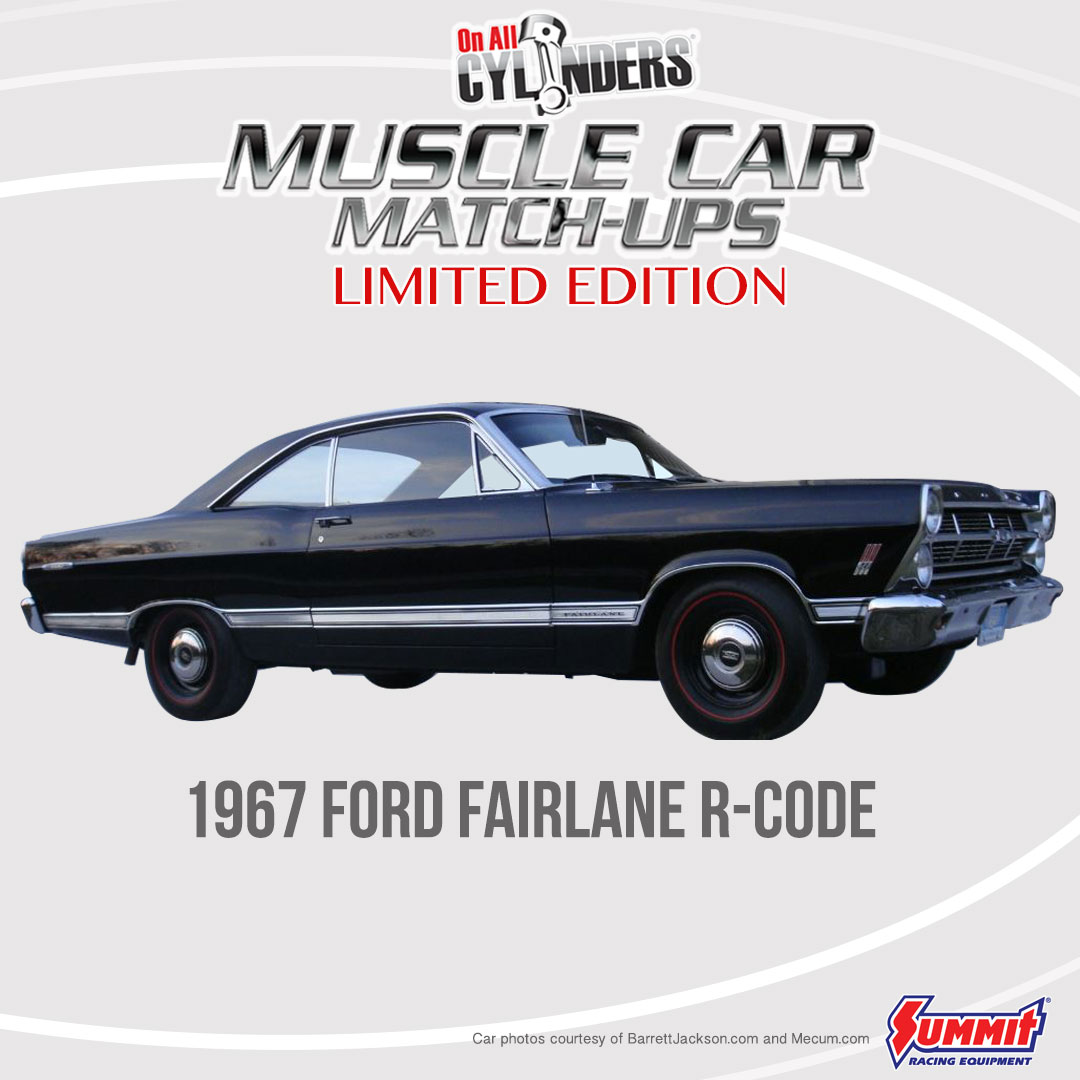 The 1967 Fairlane R-Code is one of the rarest Ford muscle cars ever, and along with its 1966 model-year brethren, are among the most-coveted Ford vehicles. Two-door hardtop. Killer roofline. Sleeper drag-strip assassin. Even the most die-hard Chevy fan would want one.

Our second match-up is the second-consecutive GM vs. Ford match-up. Savage. People will undoubtedly vote with their hearts. This is the internet. How will you vote? 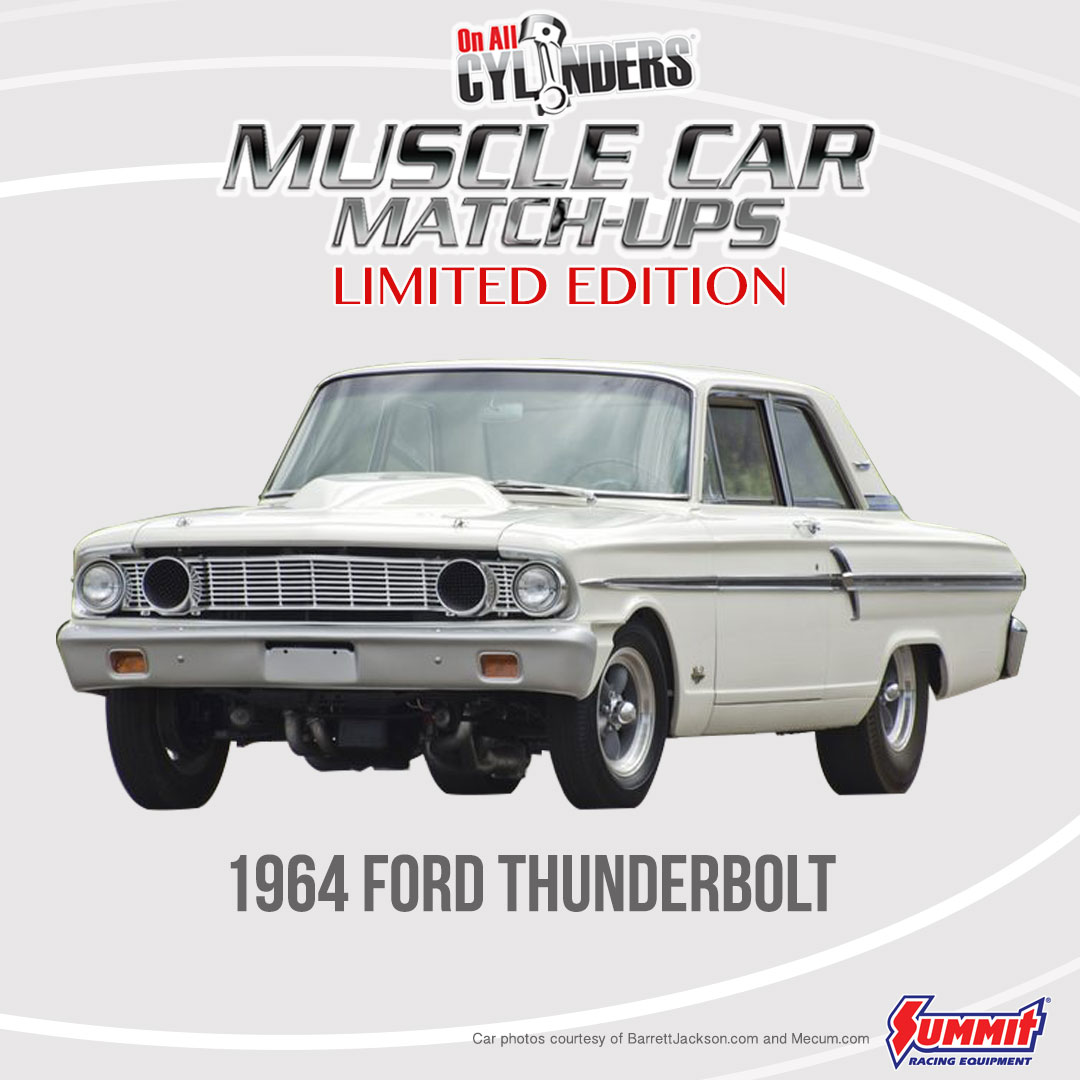 Ford took its largest V8 engine and shoehorned it into the midsize Fairlane body to create the 1964 Ford Fairlane Thunderbolt. Featuring a “high-rise” 427 cubic-inch engine, the Thunderbolt was extremely lightweight and scary fast. 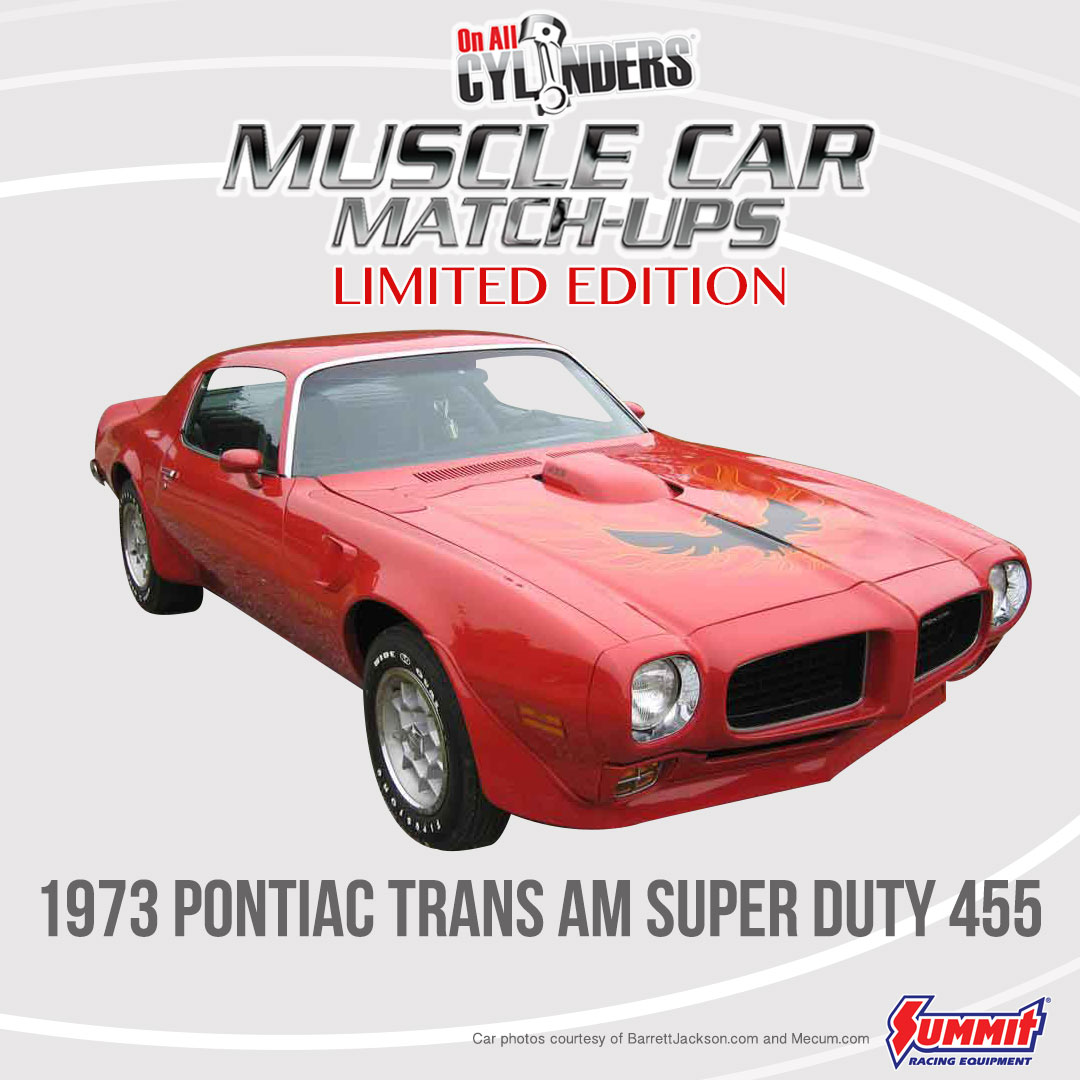 The Pontiac SD-455 showed up while other automakers were pulling back on performance vehicle production. What only Pontiac engineers could know right away, but would later be realized by the muscle car enthusiast masses, is that the SD-455 engine offers enormous potential for adding more power. And the car itself?  Not so bad, either.

Wouldn’t you know it? A third GM vs. Ford match-up. It’s almost like we’re doing it on purpose. Choose a winner, please. 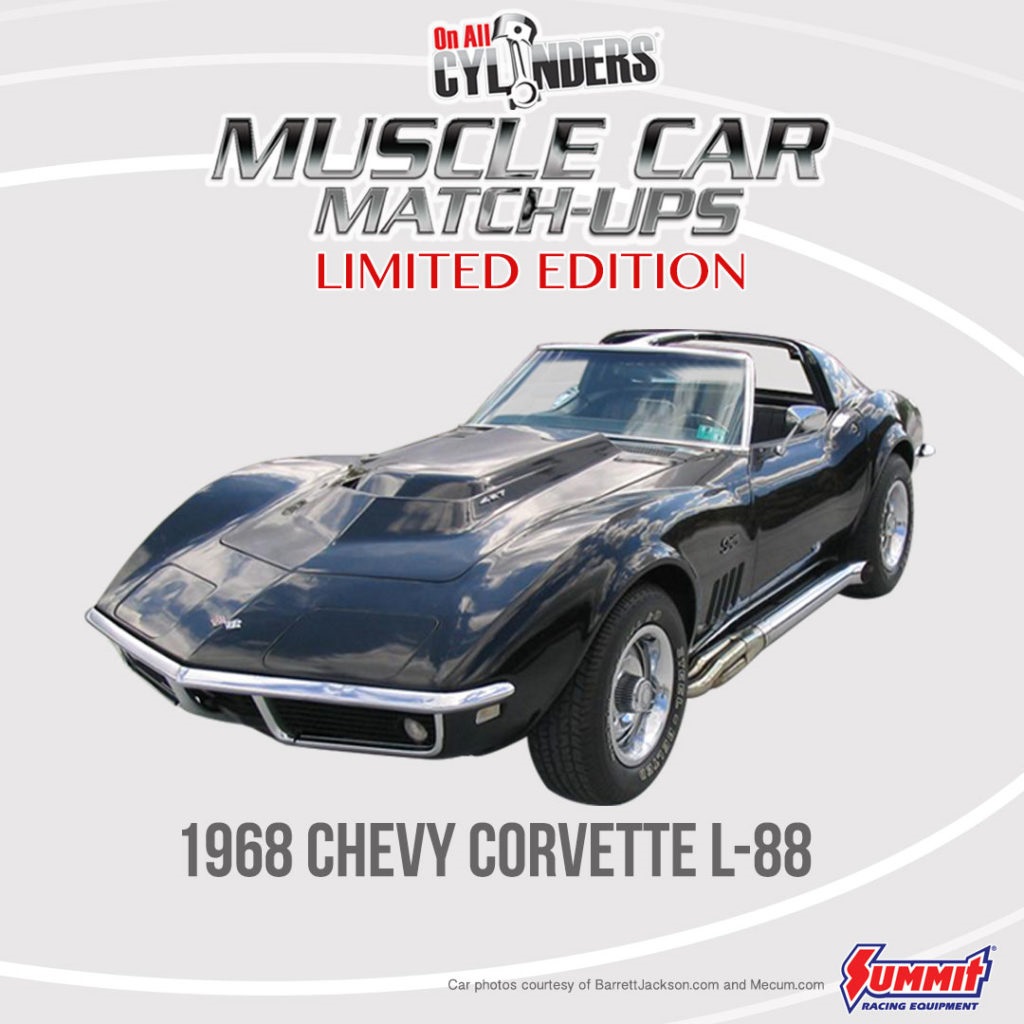 When something’s packing a 427, do you really want to argue with it? The 1968 Chevrolet Corvette L88 produced more than 500 horsepower. Giddy up. 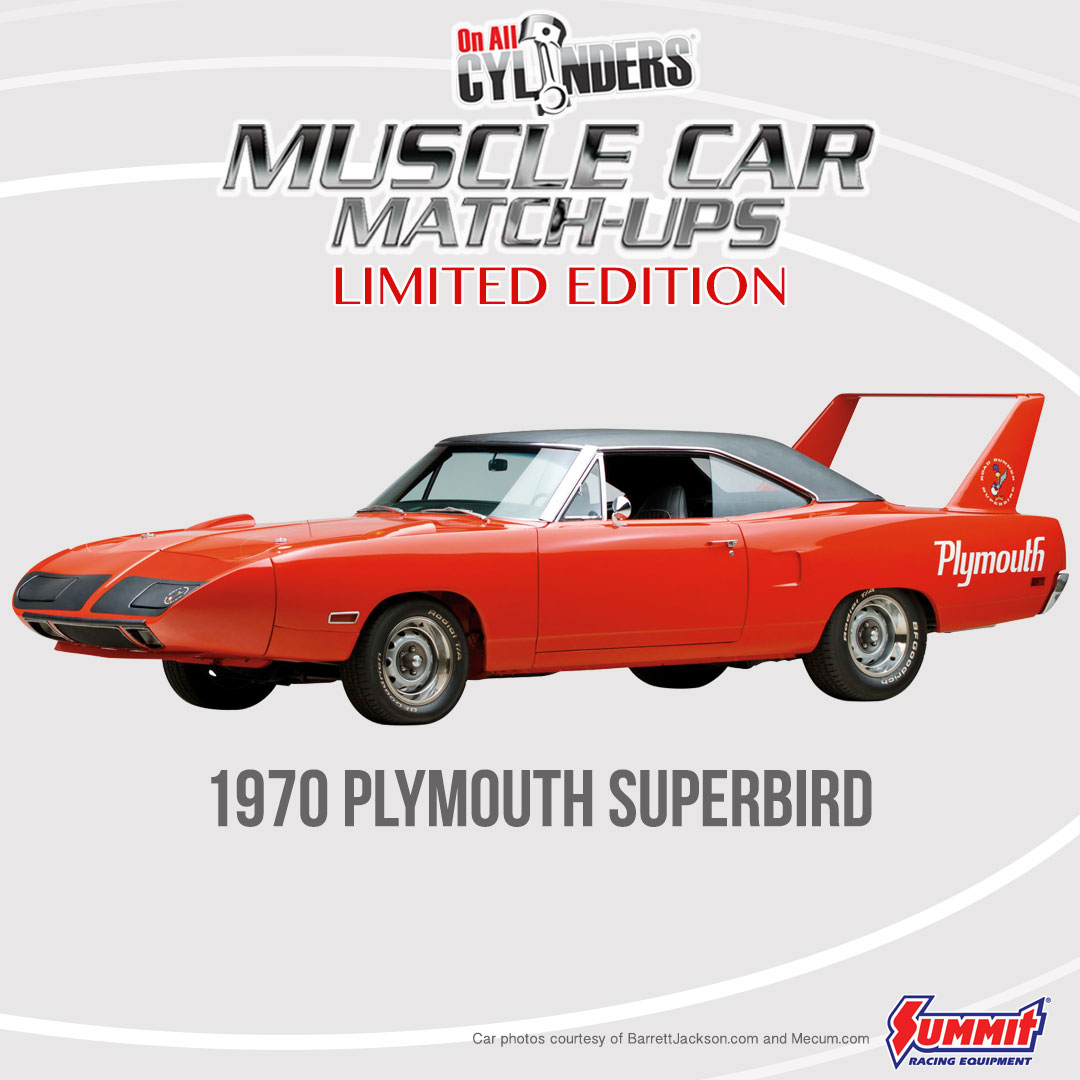 It was a car fit for a king. A Road Runner turned missile. Plymouth modeled the 1970 Superbird after the 1969 Dodge Daytona which was the first-ever car to crack the 200-mile-per-hour barrier in NASCAR. It’s probably the most unmistakable body style in muscle car history.

Both cars power should be measured in unicornpower. Rare gems, both. Sorry you have to choose between them. 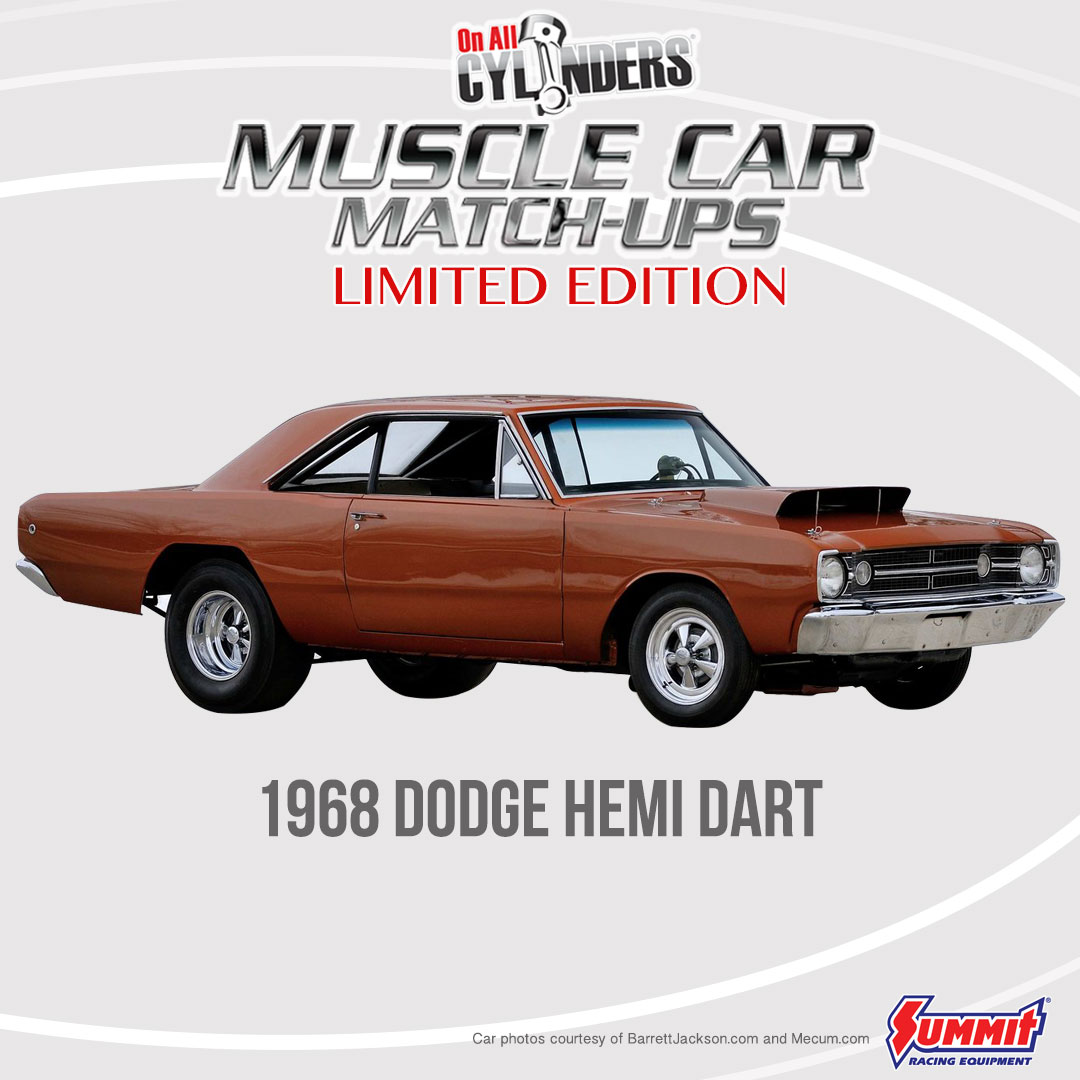 If you’re all about performance muscle and nothing else, then the 1968 Hemi Dart is your choice. Only about 80 of the limited-production models were made, and they came about as bare bones as possible. No rear seats. No radio. No luxuries of any kind. Unless you consider a fire-breathing 426-cubic-inch elephant a luxury. With minimal modifications, the Hemi Dart was easily in the 10s in the quarter-mile. 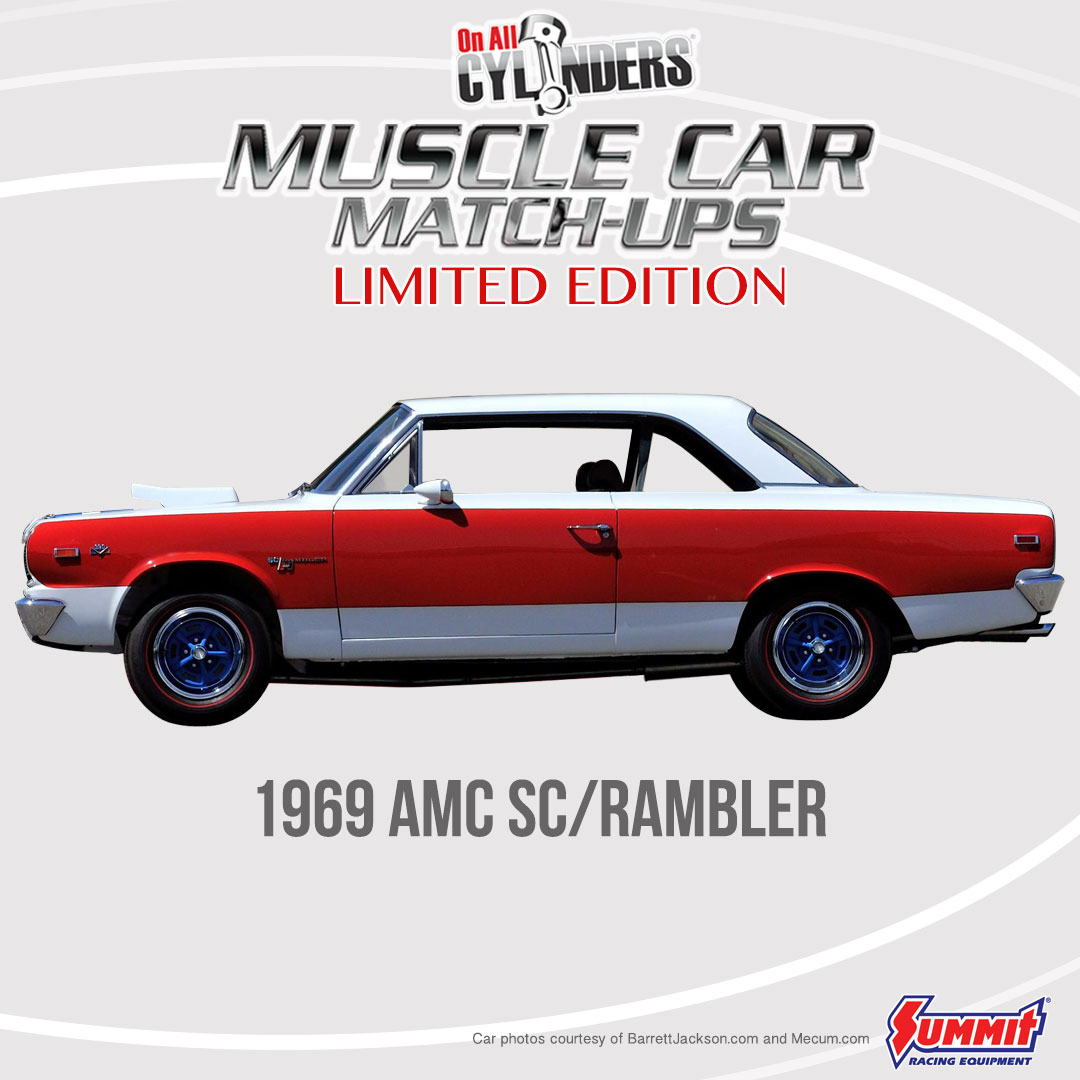 The Hemi Dart vs. the Hurst SC/Rambler. Only one moves on. Which will it be? 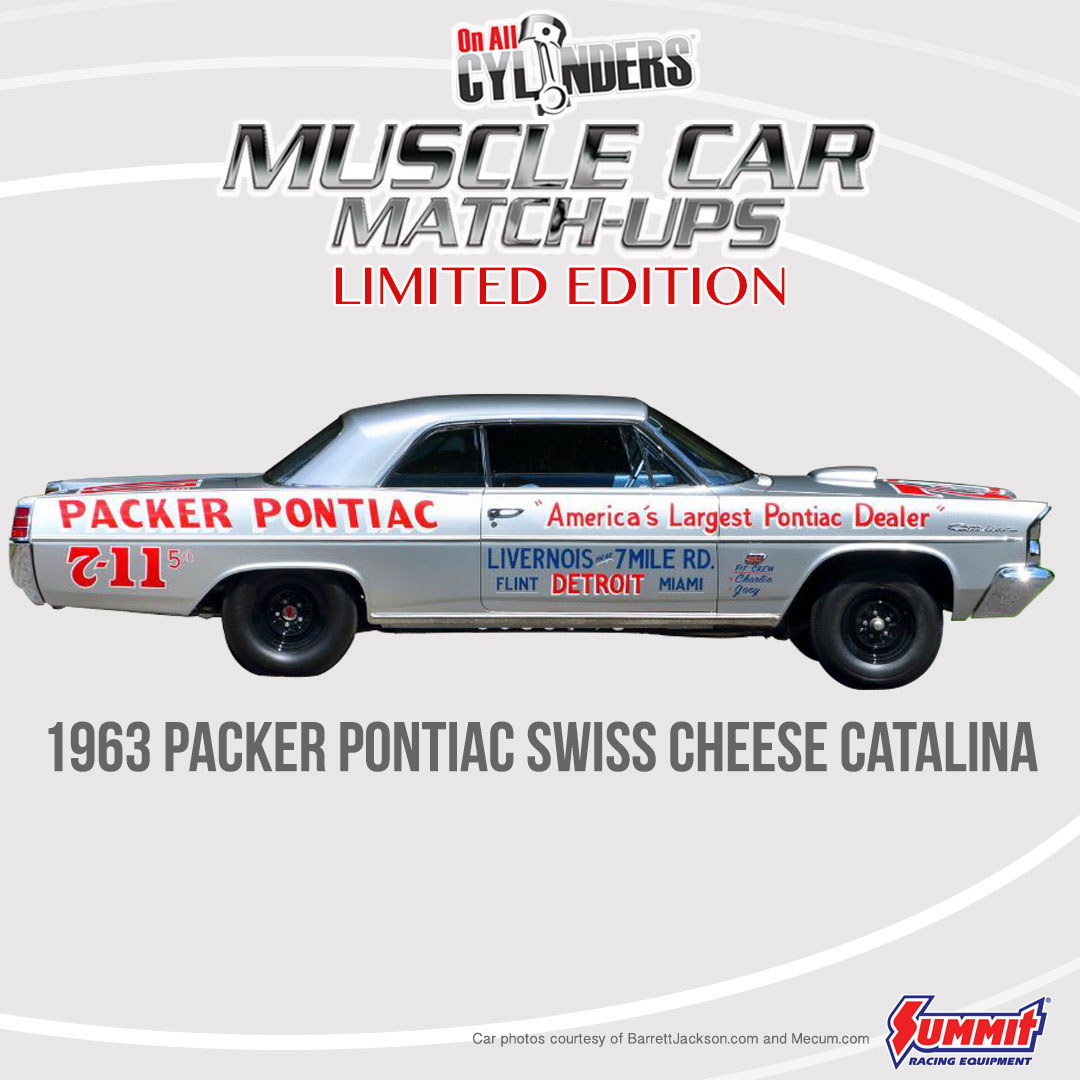 In an effort to remain on top of the Super Stock class in the 1960s, some guys at Pontiac drilled approximately 120 holes into the frame rails of a select few of its Catalinas for 1963. The idea was to reduce as much weight as possible for added speed while maintaining the vehicle’s structural integrity.

The legend of the “Swiss Cheese” Catalina was born. And you want one. Just like us. 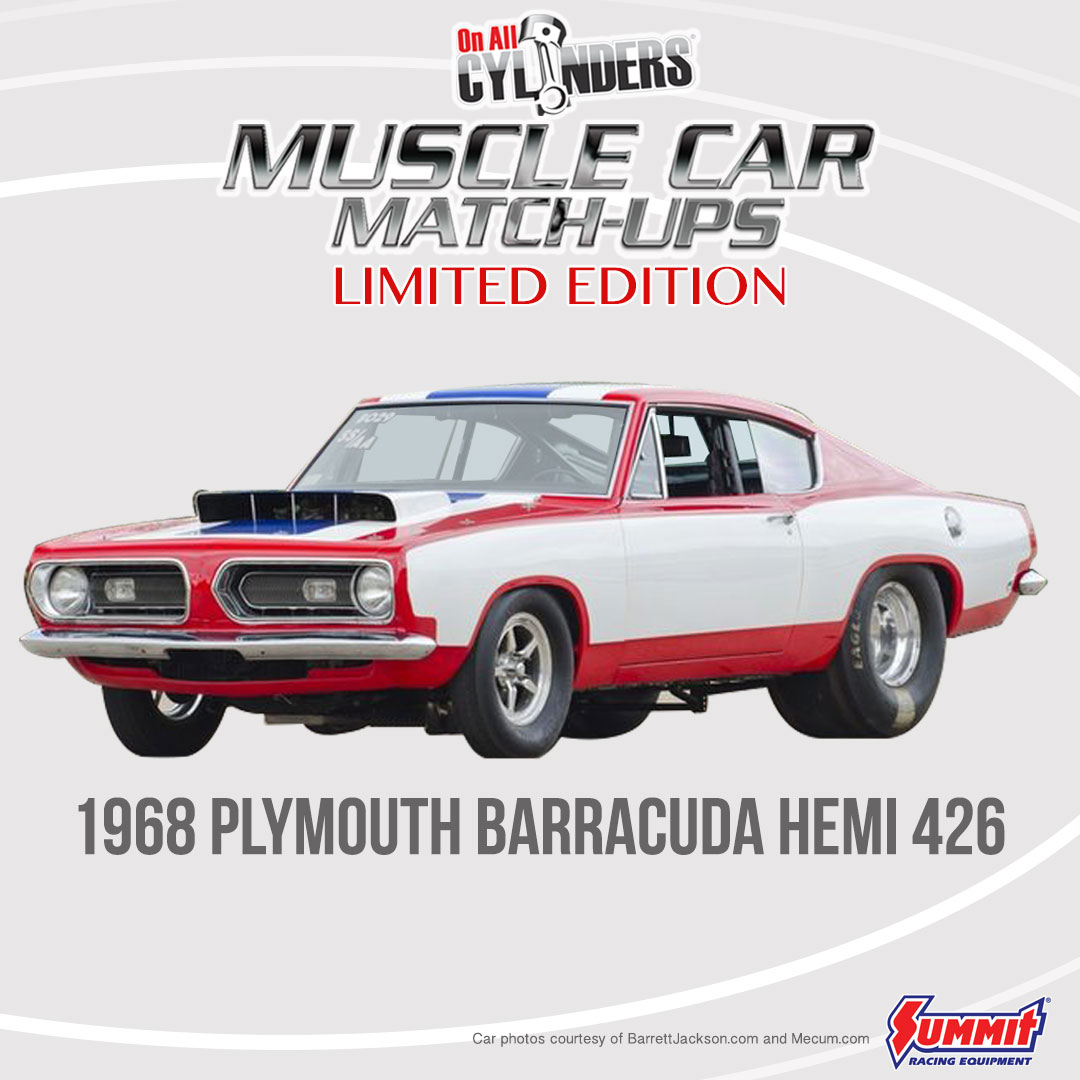 A sticker under the hood said the 1968 Barracuda with Hemi option was “not for use on the street.” Yeah, right. We know better.

Plymouth did two short production runs and offered only around 70 of these fastback models. And they were fast—as in mid-10s fast. Designed specifically for Super Stock competition, the ’68 Barracuda Hemi was assembled by Hurst and featured fiberglass body parts. Many interior components were deleted altogether to reduce weight like its Hemi Dart sibling.

Here are two vehicles where their makers did fairly radical things to make them more awesome than regular cars. Absolute legends. Both. Which moves on? 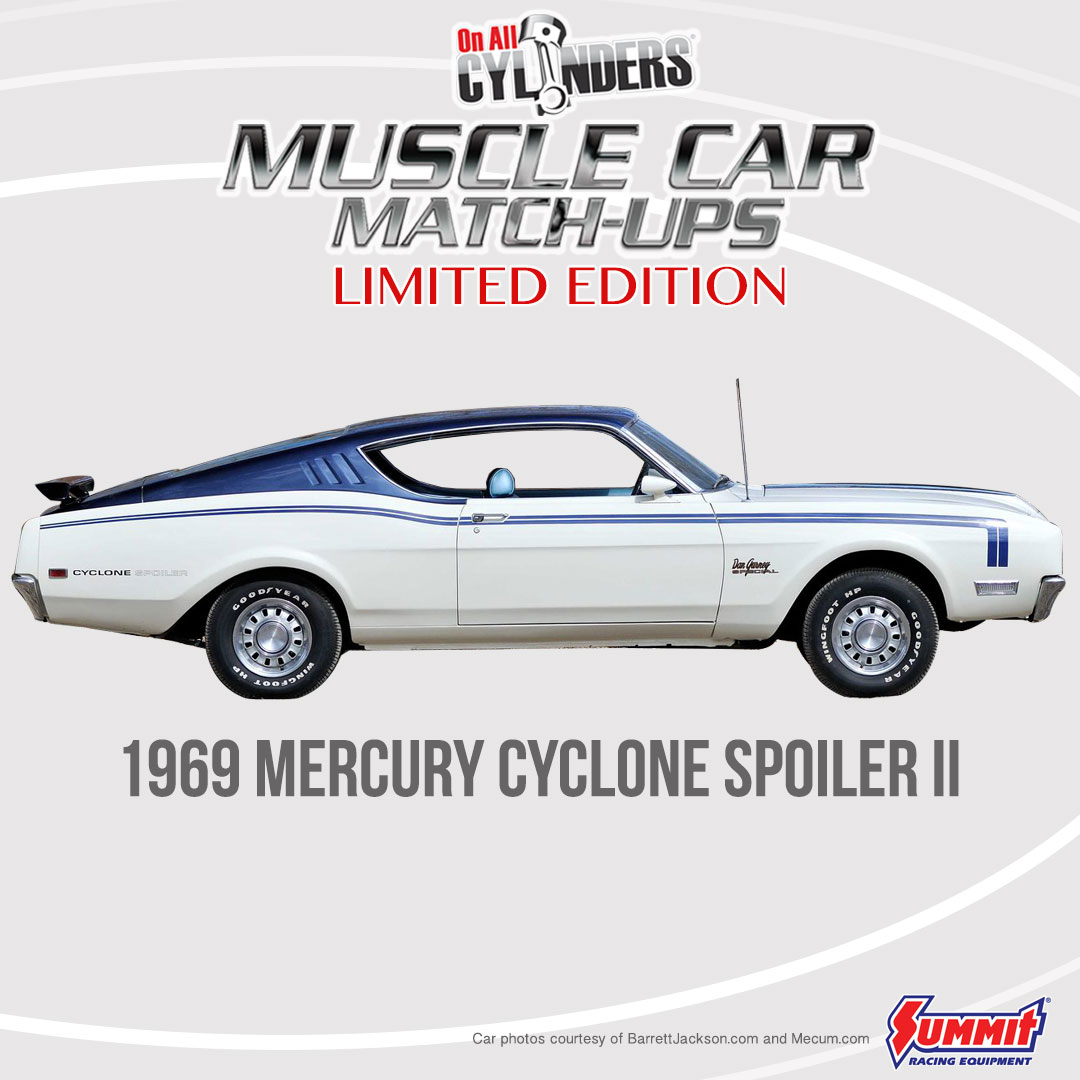 Ahh. The Mercury Cyclone Spoiler II. Some of you nod. The rest need an explanation. Back in the late 1960s, engineers at Ford and Chrysler were maniacally (in a good way) trying to one-up each other while designing super-fast aerodynamic vehicles a la the aforementioned 1969 Charger Daytona. The Cyclone Spoiler II was nearly identical to the 1969 Ford Torino Talledega. “Is that a good thing?” you might be wondering. 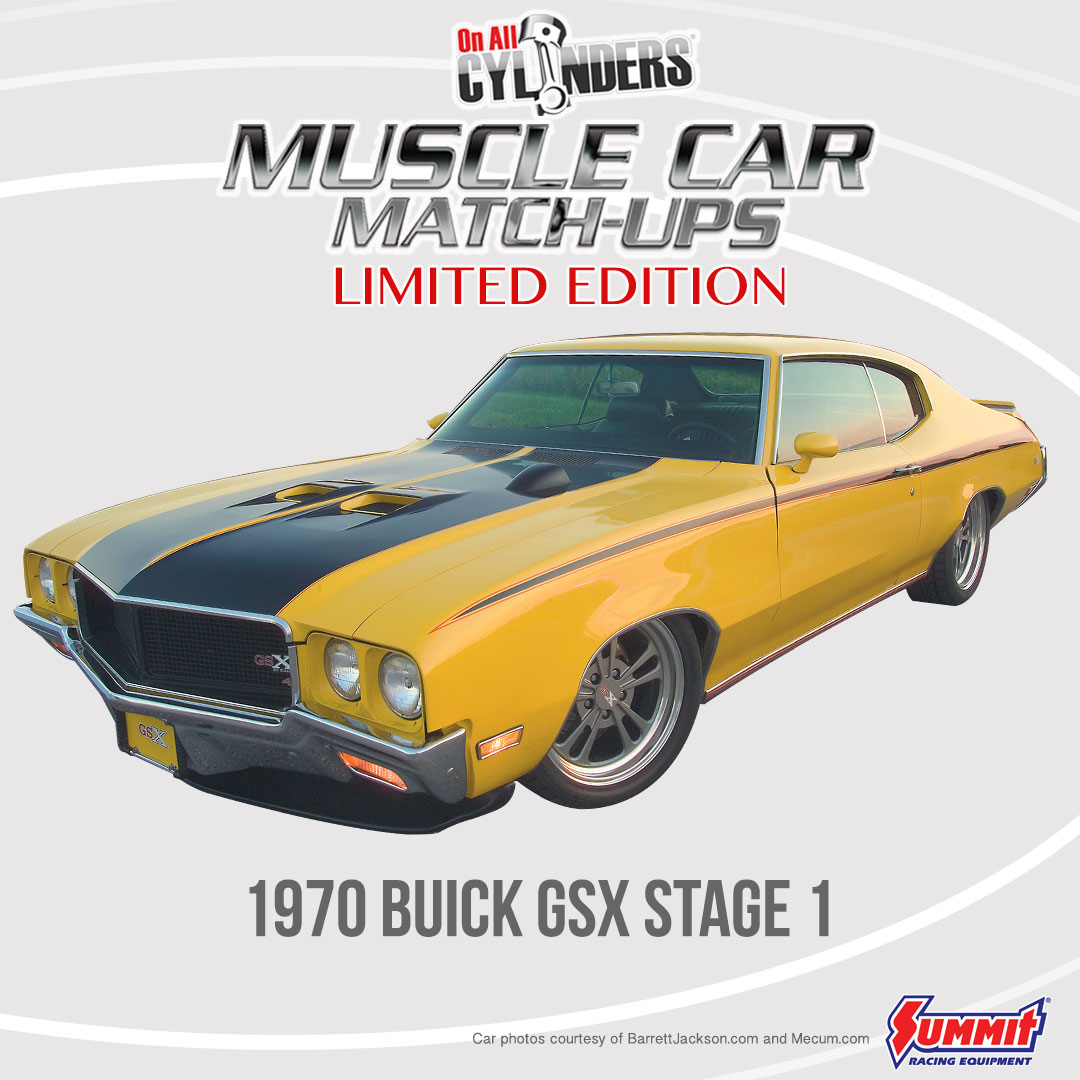 From the outside, the GSX Stage 1 looks just like “regular” Buick GS cars. So, most people didn’t see it coming when they got destroyed in a race. If the Ford Fairlane R-Code isn’t the nastiest sleeper of all time, then the GSX Stage 1 probably is.

We love the stories behind both of these monsters. And, you know, the actual cars themselves. Only one gets to move on, because life isn’t fair. But you get to decide. 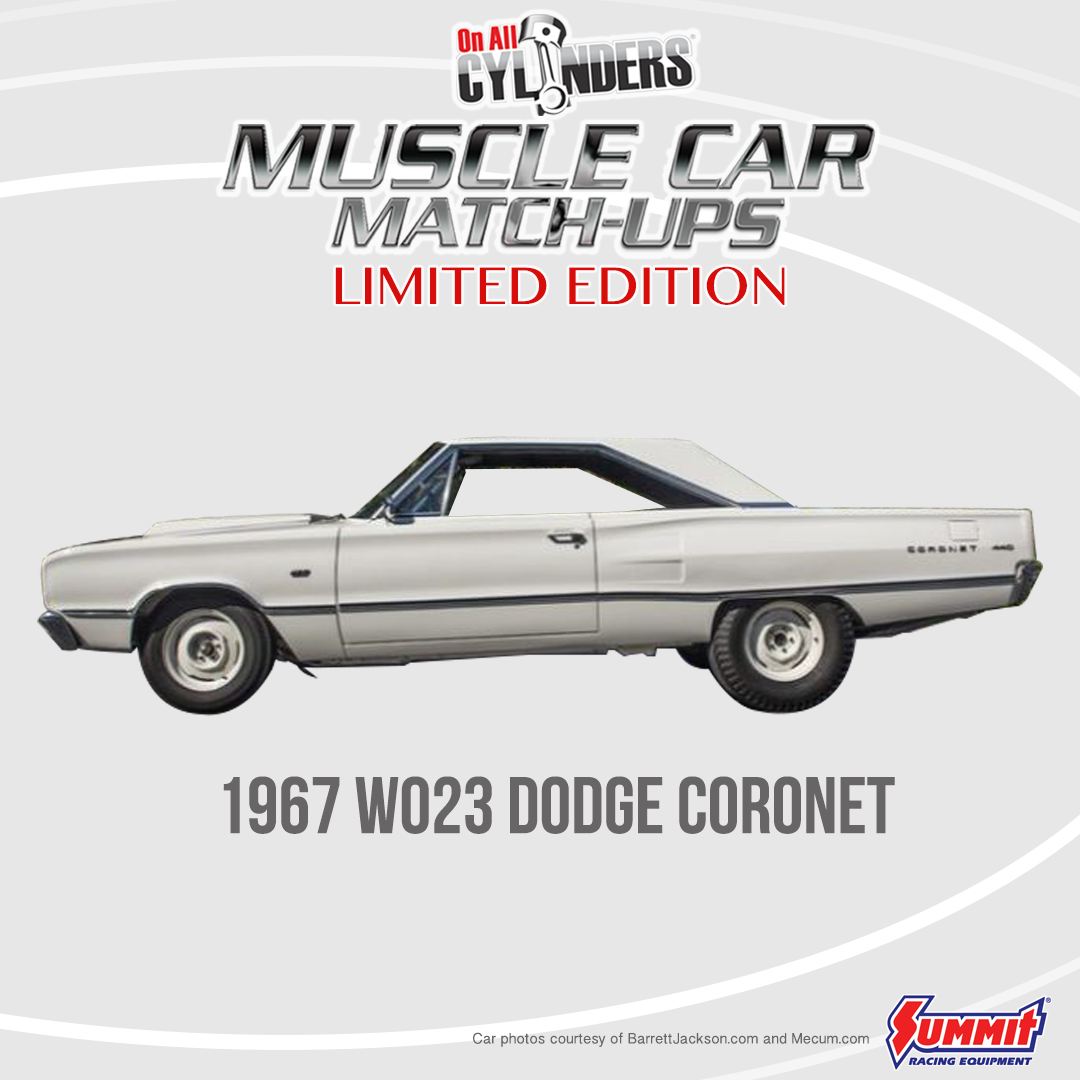 Similar to the 1968 Hemi Dart and Hemi Barracuda, the 1967 W023 Coronet was a bare-bones track assassin. No luxuries. No frills. Just a bunch of win-light-delivering Super Stock power.

Which is good enough for most of us. 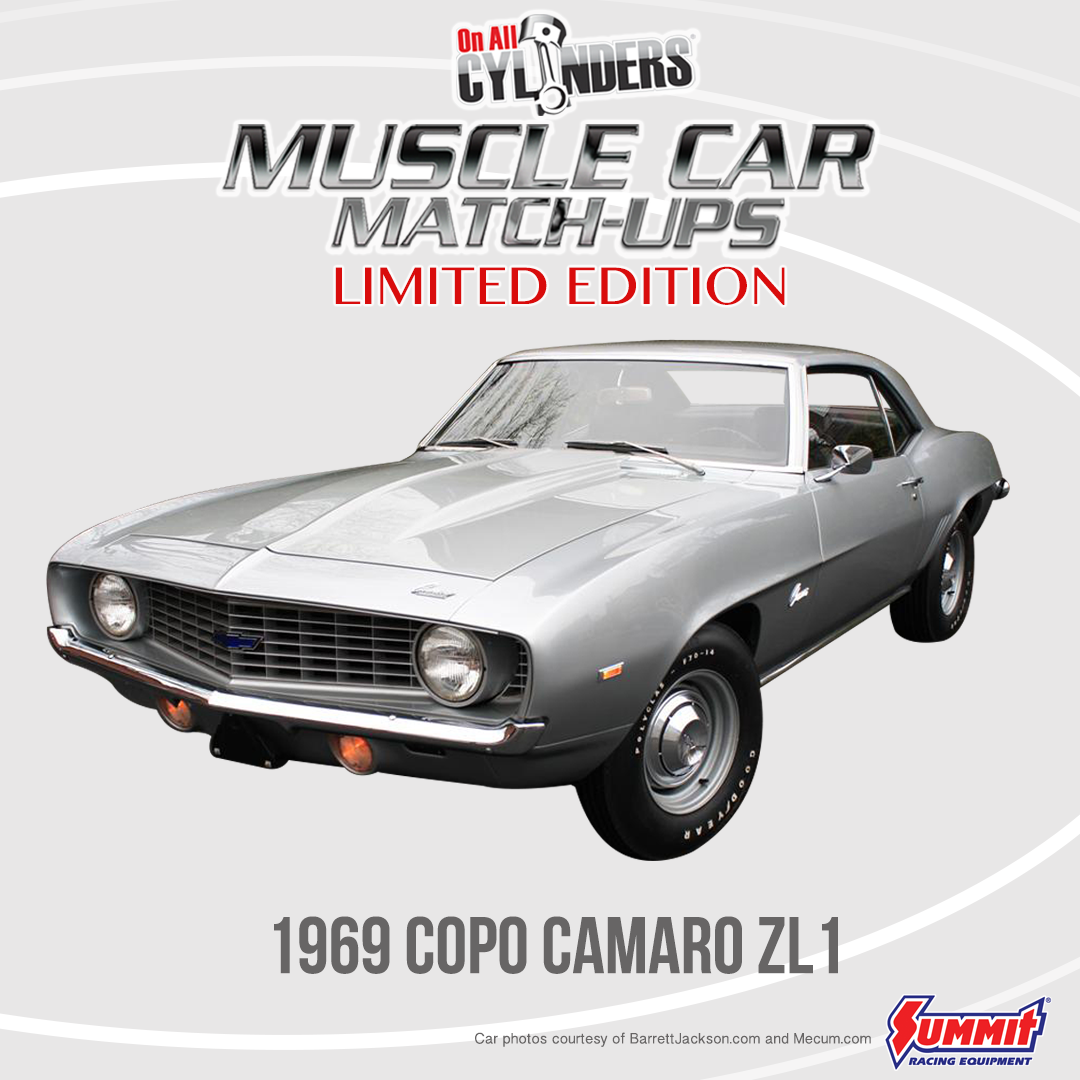 Like the COPO/Yenko Camaros, the 1969 ZL1 (COPO 9562) featured a 427 V8. However, the ZL1’s all-aluminum, 427 weighed roughly 160 pounds less than the iron block in other COPOs, making it the quickest and most valuable Camaro of the time. Add in the fact that only 69 of them were built, and the 1969 ZL1 remains arguably the most desirable, sought-after (and still fast) Camaro you can find.

The WO23 Coronet or the famed ZL1 Camaro? There are no bad choices except not making one.

16 responses to “Vote Now in the 2019 Muscle Car Match-Ups: The “Limited Edition” Edition”