Editor’s Note: Perhaps the only things Travis Jones loves more than his 1986 Monte Carlo SS are autocross courses and a good challenge. That’s why Travis is on a mission to transform his Monte Carlo from an underpowered, ill-handling daily driver to an Autocross hero. A self-described “GM guy through-and-through,” Travis is a regular on the site OppositeLock, has documented his project on his Instagram page (@sslow6.0), and will give us a first-person account of his build here as a guest writer.

Travis has owned the Monte Carlo since high school. Although he’s thought about selling it from time-to-time, Travis has held on to it for sentimental reasons, even though the car has often sat idle. After his girlfriend inspired him to try Autocross for the first time, Travis started to look at the Monte in a whole different way.

“I became obsessed with taking a 1980s boat and making it handle,” Travis said.

We’ll let him pick up the story from here: 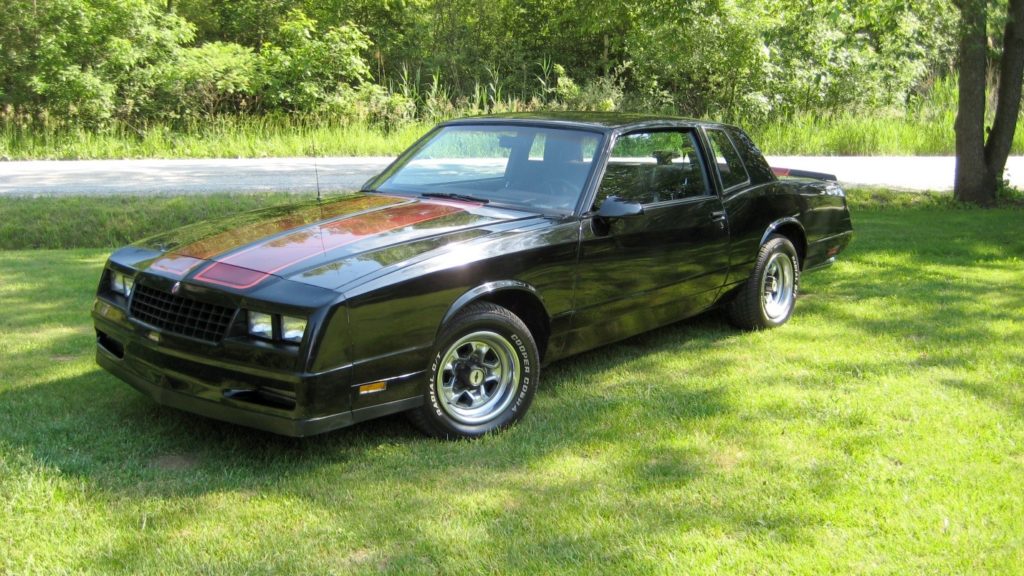 I was hooked after the first run.

I had a newfound passion for SCCA Solo Autocross, a desire to be competitive, and I had my old 1986 Monte Carlo which I’d owned since age 15.

While others might have opted to upgrade to something better suited for autocross, this is where the story of my Monte Carlo really begins.

Sure, I thought about selling the car, but I built it with my dad and had too much time, emotion, and memories invested in it to watch some else drive it away forever. But seeing that the car felt sluggish, and handled poorly (my then daily driver—a 2015 Taurus SHO—was much more fun to drive), it needed a lot of attention to again be a fun street car, a competitive autocross car, and enjoyable to drive.

It was exactly that challenge which inspired me to prove that a boxy, sluggish 1986 Monte Carlo could become a formidable autocross weapon.

Within a month, I had spun the rods out of the block on the factory 305. In the summer of 2004, my dad and I put a rebuilt 350 in it and did the body work and paint. While it looked good and made the right noises, I knew there were multiple things that needed to be addressed in the suspension immediately after my first autocross event. The car pitched and swayed, and the steering was loose and imprecise.

It was fun, but it sure wasn’t fast.

The first chassis parts that I ordered for the car were new sway bar end links (MOG-K700538) and sway bar bushings (MOG-K6455). Knowing that my Monte Carlo SS came equipped with a large front sway bar as part of the F41 suspension package, I figured that the 30-year-old factory end links were worn out and this could be a quick, cheap and easy upgrade. I was partially right. The sway bushings and end links were installed without any fuss, and I was sure that this would make a huge change in the character of the car around the course at the next event.

After the Autocross season ended, I proceeded to spend the winter running through countless different scenarios, researching different parts and suspension kits, and bouncing ideas off of my car friends. I am very thankful that I still have these friends after asking them 1000 questions, explaining 500 different scenarios, and seeking their input. To undertake a big automotive project, you need to have two things: a plan and some friends to help you in the shop from time to time. (Also a friend with their own dyno helps too but we’ll get to that later.)

I decided on three different things to address in the suspension: body roll, ride height, and steering feel.

After all of the parts came in, I called my dad and laid out my challenge. I’d load all the parts into the trunk, drive to his house on Thursday, and I’d go racing with the new suspension on Sunday—a 56-hour suspension upgrade!

Follow along to see how our 56-hour suspension overhaul came together below: 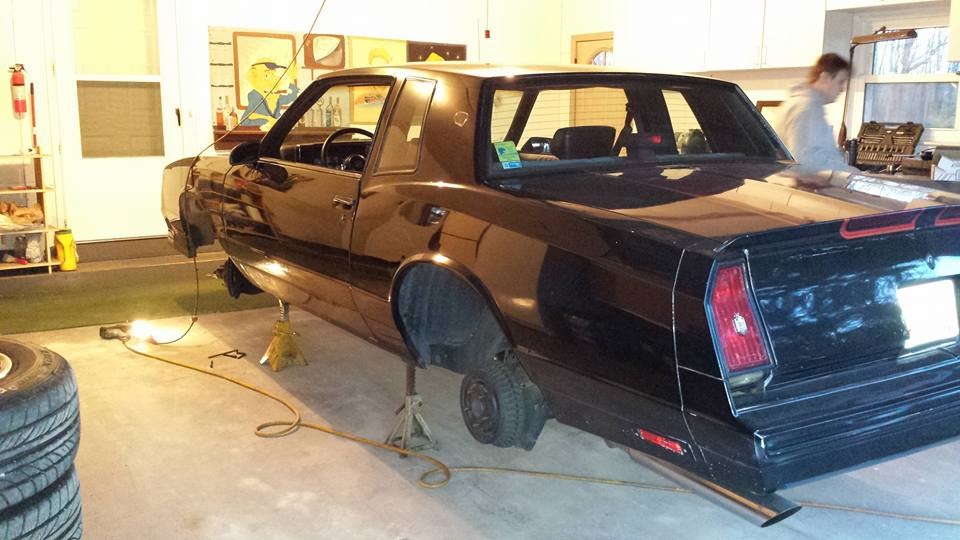 The first step was to get the car in the air and the wheels off. 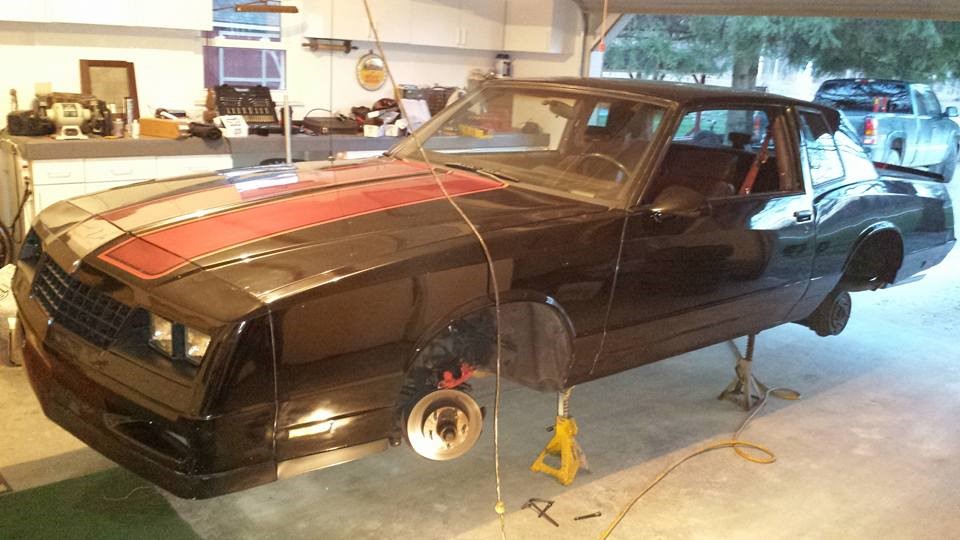 Next, we needed to remove the front calipers from the spindles. Here you can see them off and hanging by a bit of bailing wire so there is not a lot of tension on the brake hose. After this, it was time to remove the dust covers on the hubs, remove the cotter key and crown nut on the spindle to pull the bearings and hub off, then three 11mm bolts to take the dust shield off. 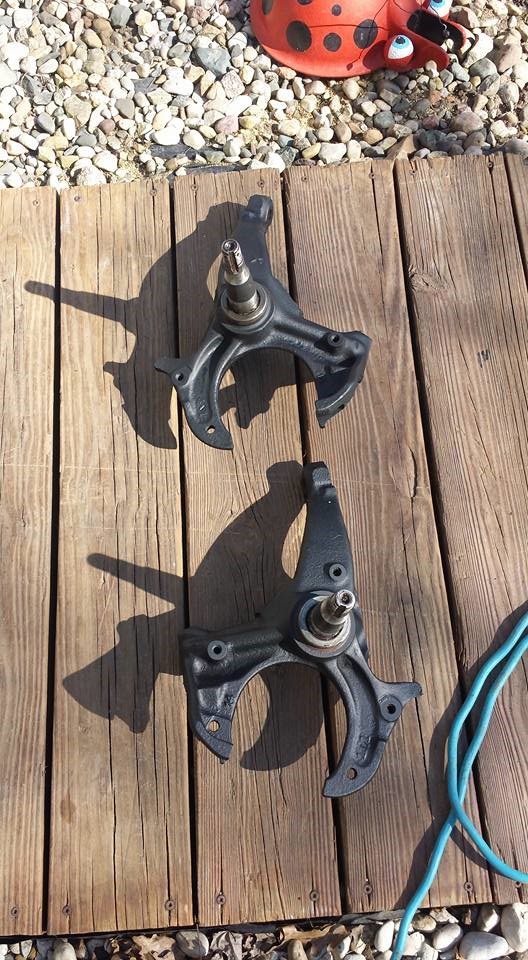 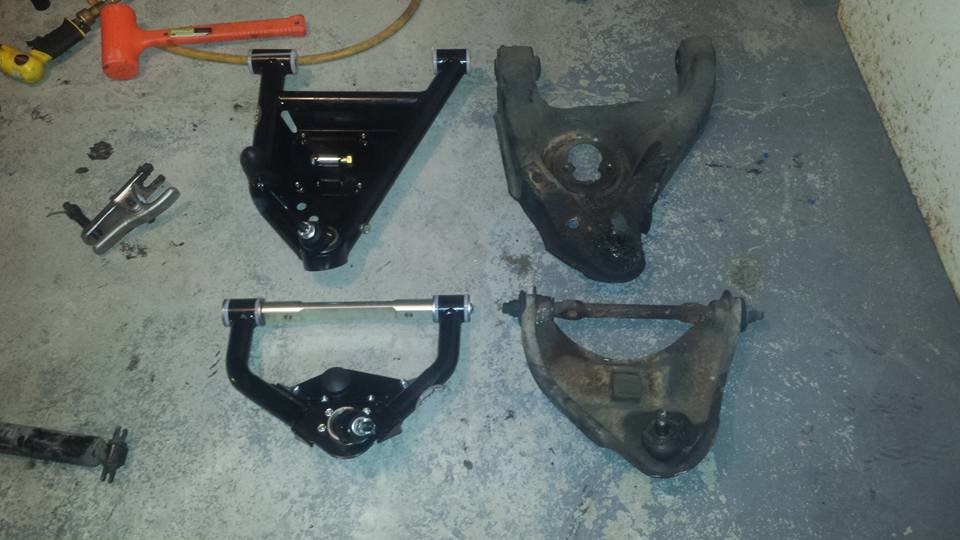 Next we moved on to the control arms. It was a very simple disassembly—two 18mm bolts for the upper control arm cross shafts (saving the shims and marking them for each location front and rear) and two 18mm through bolts at the attachment from the lower arm and the front K-member. With these gone, I could line up new and old side-by-side for a photo. 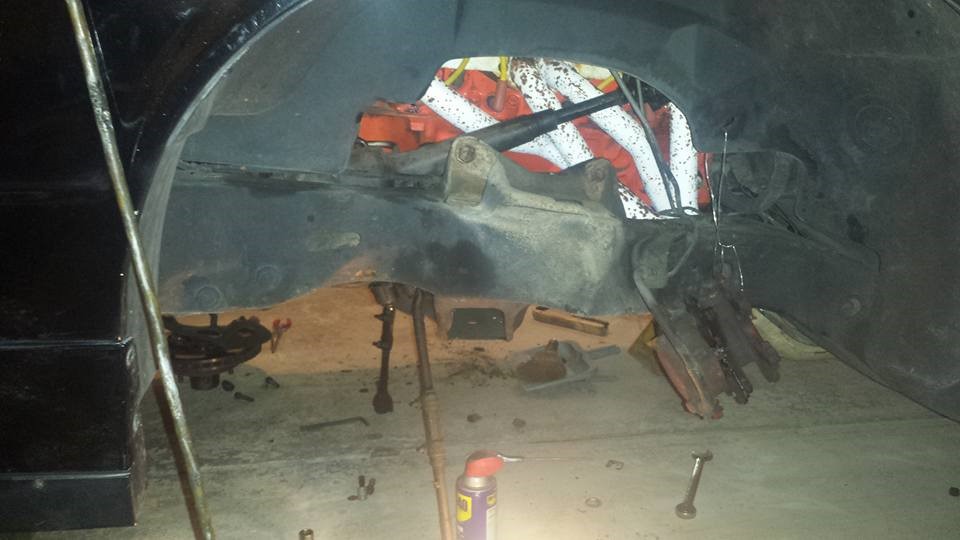 With both sides of the front suspension off the car, we decided to call it a night at around 12am on Thursday. On Friday morning we got back to work and removed the steering box, tie rod ends, and idler arm. Then was the fun part—putting new shiny pieces on the car. 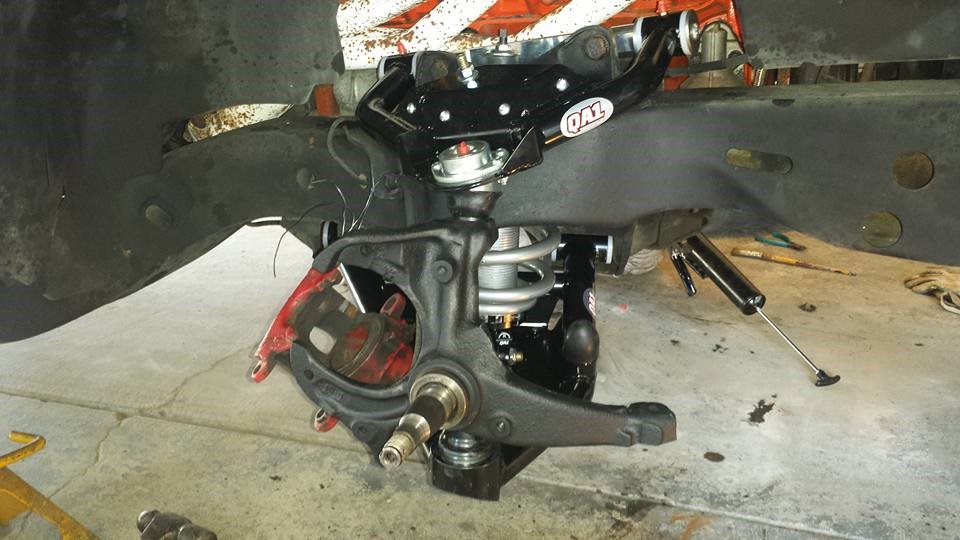 Here it is with the new uppers, lowers, and front coilovers. 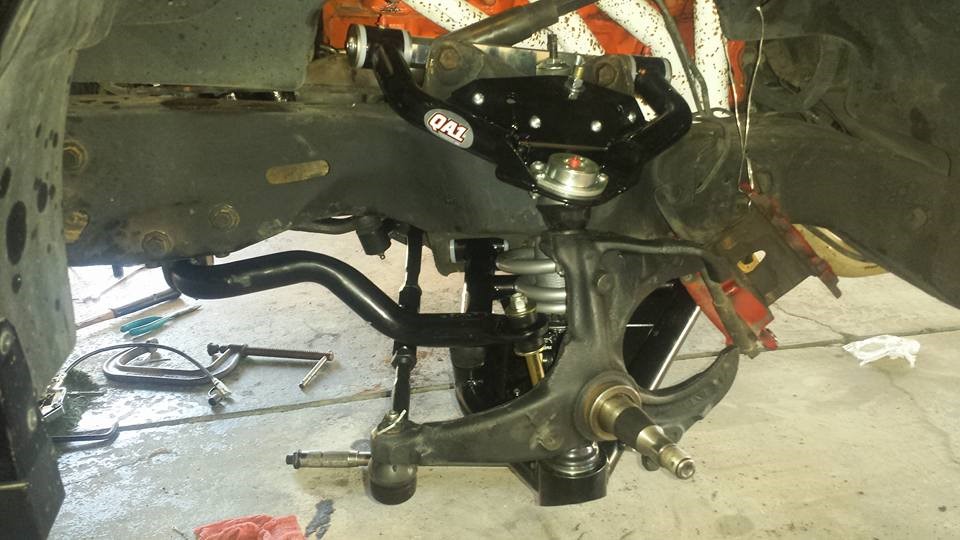 Here are the new tie rods and steering box. Note sway bar installed upside down (realized this once we put the car down on the ground). We got the front buttoned up and started working on the rear. 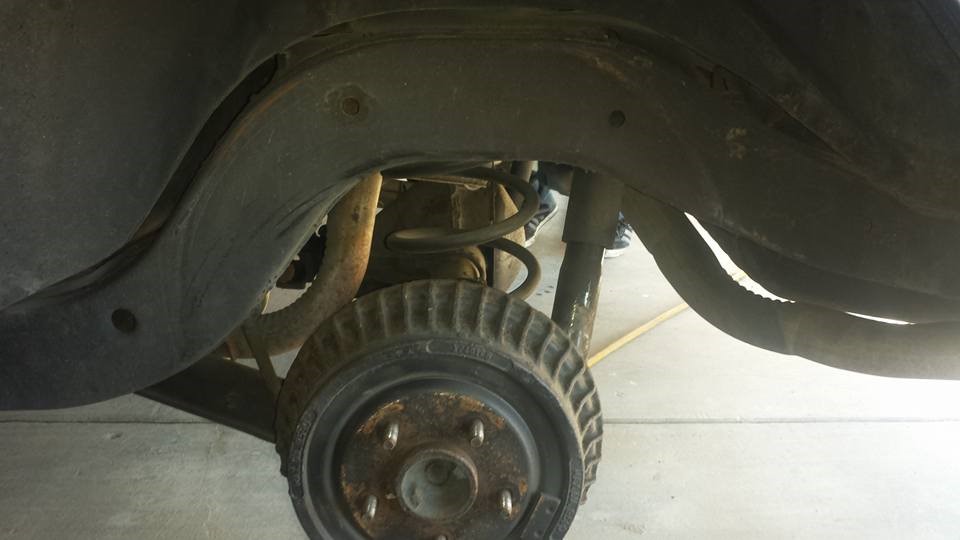 Here you can see the factory coil and shocks. Two bolts attach the shock to the upper frame and a single large diameter bolt holds the shock onto the axle. With the rear shocks removed we placed a jack under the center section of the rear axle, lowered it, and let the axle droop down so we could simply pull out the rear springs. To install the rear shocks we had to drill out the two mounting holes in the frame to 3/8″. We installed the upper shock mounts (now a separate bracket) and the rear shock brace, but didn’t install the coil-overs so we would have room to work with the upper and lower trailing arms. This was the beginning of the hardest part of the project. Due to the location of the exhaust, getting a good hold on many of the attachment bolts for the uppers was next to impossible. We spent two hours and an innumerable amount of swear words on a single bolt due to the fact that we couldn’t cleanly get it with a boxed end wrench and had to use an open end. The lowers weren’t too bad but there were some strange angles that took some extra effort due to the placement of the exhaust, I couldn’t install the lower control arm mount to frame brace; this will be something addressed later when the exhaust is re-done. 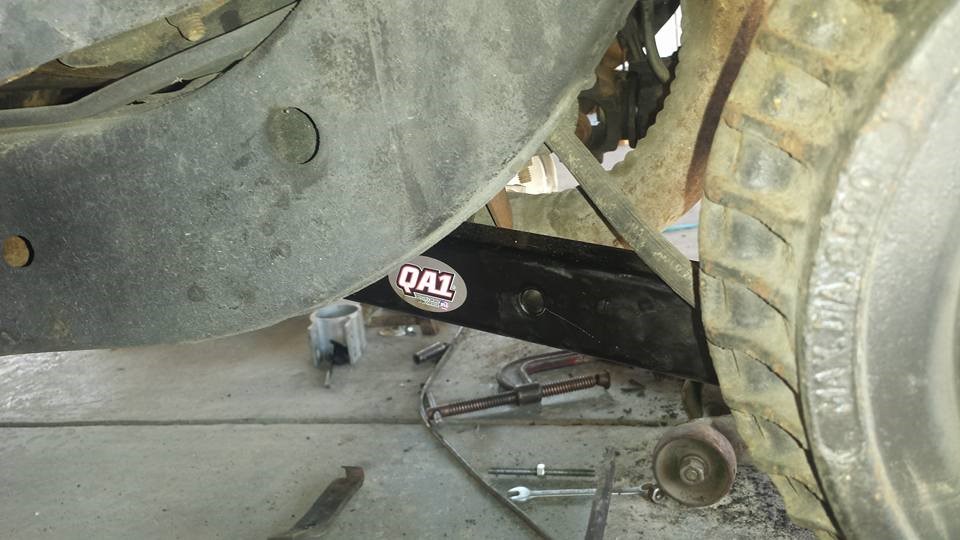 Here you can see the driver side lower installed. The next step with the uppers was to remove and replace the bushings located in the upper part of the center section of the differential. To remove them, we used a 5/16″ drill bit to drill rubber out of the bushing until it debonded and came out of the outer can that was pressed in the housing. We carefully cut the can with a sawzall, and then bent the can in on itself to remove it from the housing. To install the new bushings we put them in the freezer, lubed them up with some super lube, and hammered them in with a dead blow hammer. We installed the new upper control arms and called it a night at 1 am on Friday. 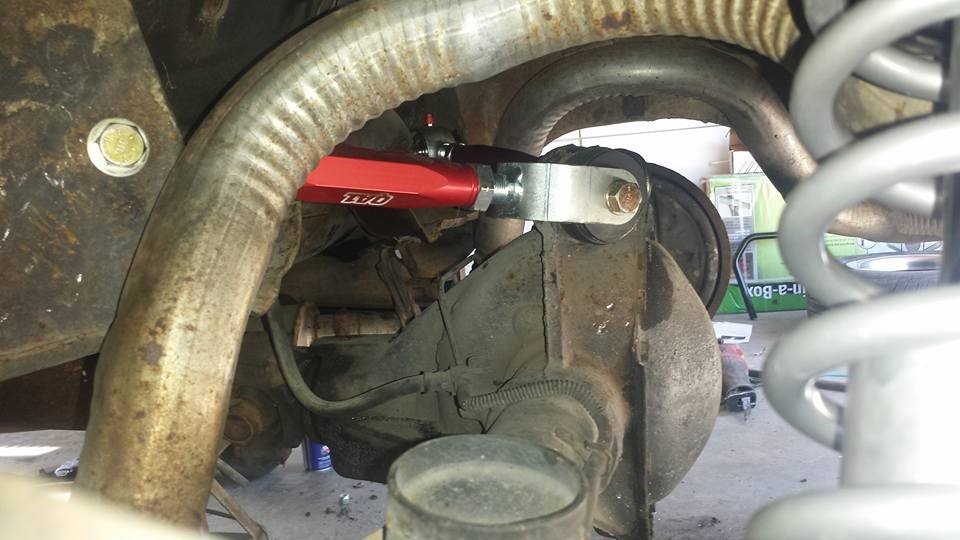 Early morning on Saturday we started back up working, knowing that I had to have the car to the alignment shop by 3pm to have it adjusted and safe to race for Sunday. The rear sway bar was the last thing to install. Since it adjustable, you have to install the brackets to the bar and then bolt them to the rear control arms. A simple easy way to measure your distance is to use the old control arm and run a bolt through as the distance is the same between the new control arms and the old control arms. We then installed the rear coilovers, which went together very easily. A installed a single bolt through the upper mount, and then using the lower control arm attachment point and single bolt through where the old shock connected, the coilovers were on. We then buttoned up the suspension.

Once we put the tires back on and got the car back on the ground, we started it up. The power steering, which we forgot to re-fill completely, groaned, complained, and then died.

We assumed the Cardone reman box was bad. Time was of the essence so I muscled the car quickly to the alignment shop where the toe, caster, and camber were dialed in where QA1 recommended for “aggressive” handling characteristics. However, none of this would matter if I didn’t have power steering.

When we got the car back from the alignment shop, it was already past 5 p.m., and we knew we would have to get the steering fixed. The first thing we did was put the factory steering box back on. No luck—the power steering was still dead. After trying to test the pump, I made the decision to just go get another one before the parts stores closed. We got the new pump, and with some improvisation got the old pulley off.  Then, we installed it onto the new pump. We filled the reservoir with power steering fluid, started the car, and crossed our fingers.

It made the beautiful hydraulic groaning noise as it replaced air in the box with fluid. I had power steering once again.

Finally, at 11 p.m. on Saturday (nine hours before I had to race), the car was done—or at least as done as it was going to get.

I didn’t even have time to wash it before I raced the next day. Even if I had the time, I was too exhausted.

6 responses to “Monte Makeover (Part 1): Transforming an ’86 Monte Carlo into an Autocross Killer Starts with a 56-Hour Suspension Overhaul”