Very few of us can remember a time before we were car guys. Ever since that first ride home from the hospital, cars have helped define who we are. And every day after, we’ve never lost that passion for anything with four wheels and an engine.

Jim Wilkins, the owner of this incredible 1967 Nova SS, exemplifies what it means to be a lifelong car guy, showing that wherever life takes you, there’s no shaking that urge to get back into the garage.

“I’ve always loved hotrods,” Wilkins said, rattling off some of his past rides. “There was the Chevy-powered ’63 Falcon I drove back in high school, and I raced a ’68 Chevelle for a while, and later I drove a ’70 Chevelle SS,” he said. “But the fastest car around—that was a blue 1966 L79 Nova that a guy in my town had. Every time I saw it cruising the main drag, I thought to myself, ‘Man, would it be cool to have a car like that!’”

Like a lot of car guys, however, Wilkins’ automotive pursuits eventually took a backseat to familial obligations.

“I was really big into building and racing when I was young,” Wilkins said. “Of course, all that slowed way down when I got married and had kids. I worked all day, went to college nights, and travelled worldwide for business—that didn’t leave a lot of time or money for cars.”

But after years of putting his hobbies on hold, it was Wilkins’ wife, Jann, who insisted that he get back into the game. And Wilkins wasted no time picking up right where he left off.

“It was late December, and my wife and I were out deer hunting in the freezing cold,” Wilkins said. “I was sitting in the deer blind, on EBay, having a hard time manipulating my cellphone to place bids—but I got it! I wonder how many trophy bucks sneaked by while I was messing with my phone,” he jokes.

Frostbitten fingers aside, Jim and Jann emerged from the woods victorious, bagging the musclecar of his adolescent dreams—a 1967 Nova SS in Marina Blue, complete with matching blue vinyl—the spitting image of the Nova from his high school years. Of course, it wasn’t packing the coveted L79 engine, but Jim had a plan for that.

“When I got down to Louisville to pick up the car, it was a good 20-footer, but up close I could tell is was pretty rough around the edges,” Wilkins said.

However, he wouldn’t know the full extent of the Nova’s issues until it was placed in the capable hands of Jake Burton and his crew at Burton’s Kreative Motorwerks in Dayton, OH. After a close inspection, it was clear the car didn’t require a full rotisserie restoration, but much of the sheetmetal was removed and stripped in preparation for a thorough refresh.

“That’s when we discovered the rear quarters,” Wilkins said. “Four or five guys owned this car before me, and one of them must’ve been a real Bondo Picasso. The car had been rear-ended at some point, and was mangled up pretty bad.”

Discovering more body filler than actual sheetmetal, the decision was made to replace the damaged rear quarters with reproduction panels, then re-wrap the car in a fresh coat of the Nova’s original Marina Blue paint. Completing the factory fresh look, much of the chrome trim was replaced with hard-to-find NOS (new old stock) pieces. “The goal was to make it as nice as possible while staying true to what the car was originally,” Wilkins said.

And while the Nova’s bodywork stays faithful to Chevy’s original design, the hardware underneath is a race-ready testament to Wilkins’ love for high performance Bowties.

Speaking of ponies, there’s no shortage of them under the hood.

“I wanted to build the engine of my dreams—my goal was 600 horsepower,” said Wilkins, who turned to Terry Smith at Horsepower Sales in Cincinnati to make that dream a reality.

A product of the red-hot drag racing scene of the 1960s, Wilkins didn’t bother with any new-fangled power adders or fancy fuel injection in pursuit of his goal. Instead he opted for a refreshingly old school 420 cubic-inch cast-iron Dart Little M block, loaded up with a full complement of race-ready hardware. The highlights include a custom-ground camshaft from Comp Cams, a Callies Dragonslayer crank, forged Diamond pistons and Eagle rods, Dart Pro 1 aluminum heads, an Edelbrock Super Victor manifold, and a Quickfuel Q-Series 950 cfm carburetor to keep it all well fed. The combination is good for a dyno-proven 612 horsepower and 537 ft.-lbs. of torque—a naturally aspirated dream come true for Wilkins, and an absolute nightmare for the Nitto drag radials out back.

Wearing that Nitto rubber is a set of exotic three-piece Forgeline ZX3R wheels. These lightweight, center-locking, forged aluminum rollers were a Father’s Day gift to Wilkins from his wife, who chose the final design. “I wanted something that would really make the car pop,” Jann said. “I’d been out of the hot rod scene for so long, and I hadn’t been keeping up with the latest trends,” Jim added. “But I love the look of the new wheels.”

Decidedly less cutting-edge is the Nova’s interior, which Wilkins elected to keep true to the original. Enlisting the help of Wicked Whips Customs in Brookville, OH the seats were covered with reproduction bright blue vinyl, and the original blue carpet was replaced, as well. Hinting at the car’s high performance underpinnings, you’ll also find a trio of Auto Meter C2 gauges, plus a Hurst short-throw shifter mated to the Nova’s TKO600 5-speed tranny.

With the build completed, it didn’t take long for Wilkins’ dream Nova to start bringing home some very real accolades, cleaning up at local events, and even bringing home the top prize in his category at the Detroit Autorama.

“We bought the car with the intention of just having a nice hot rod to have some fun with,” Wilkins said. “But the hot rod bug took hold and we decided we wanted to make it as nice as possible.”

But don’t let the shiny paint and fancy trophies fool you—Wilkins isn’t afraid to let the Nova loose on the streets.

“We’ll take it out every now and then, raise a ruckus between the stoplights, and hide it before anyone notices,” he said. “And sure, it’s got a couple dents and dings on it—but who cares?” 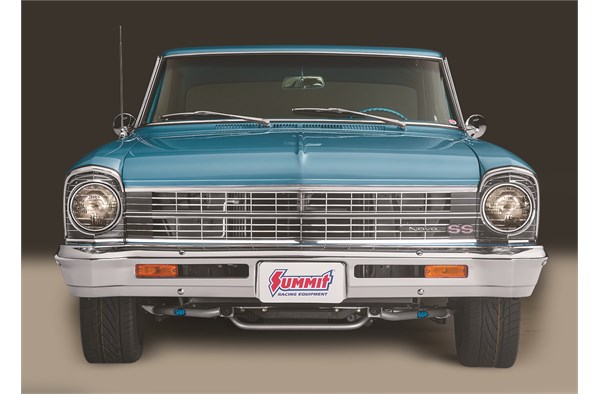 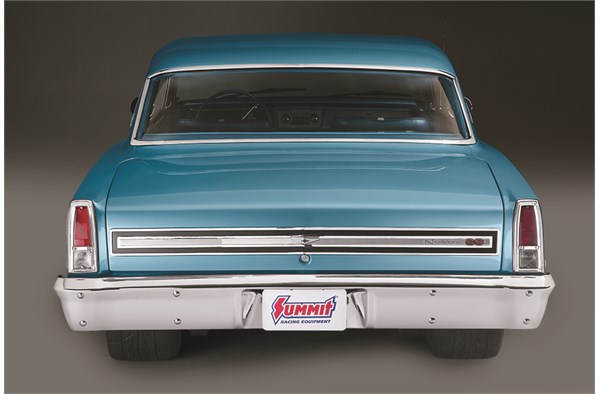 As a teenager, the baddest ride in Wilkins' hometown was an L79 Nova sporting Marina Blue paint over Bright Blue vinyl. When this lookalike showed up on Ebay more than 40 years later, he knew he had to have it

If you’re thinking that Wilkins' Nova looks brand new, you’re right! Much of the trim has been replaced with NOS (new old stock) pieces for that fresh-from-the-factory look. Closer inspection reveals the car’s CPP front end kit, hinting at the full complement of high performance hardware hidden just beneath the surface.

Not even the gnarliest Nova ever rolled off the showroom floor packing this much firepower! A clear nod to Wilkins' drag racing roots, the Chevy’s original small block has been swapped for this tire-melting setup built by Horsepower Sales in Cincinnati. Featuring a Dart Little M block, forged rotating assembly, and bolt-ons from all the biggest names in the business, this 420 cid bruiser pumps out a dyno-proven 612 hp and 537 ft.-lbs. of torque.

By finishing the seats in factory-reproduction vinyl and replacing the worn carpet, the upholstery wizards at Wicked Whips Customs were able to take more than four decades of wear and tear off the Nova’s interior. The trio of Auto Meter C2 gauges and the Hurst short-throw shifter are your only hints that this Nova is packing a 600-horsepower surprise under the hood.

With more than twice the original horsepower to contend with, you better believe that this Nova wears some serious rolling gear. Expertly selected by Wilkins' wife, Jann, the SS features three-piece Forgeline ZX3R wheels finished in Titanium powdercoat. The lightweight forged aluminum wheels feature a race-proven center lock design (rather than traditional lug nuts), and come wrapped in ultra-grippy Nitto NT555R drag radials. Behind that, you get a peek at the beefy Wilwood disc brakes.

Wilkins' Nova didn’t always sport the arrow-straight sheetmetal you see here. Among the handful of previous owners, one was clearly a “Bondo Picasso,” as Wilkins puts it, masking some serious damage to the rear quarters in layer upon layer of body filler. As part of the restoration, the offending panels were replaced with reproduction panels.