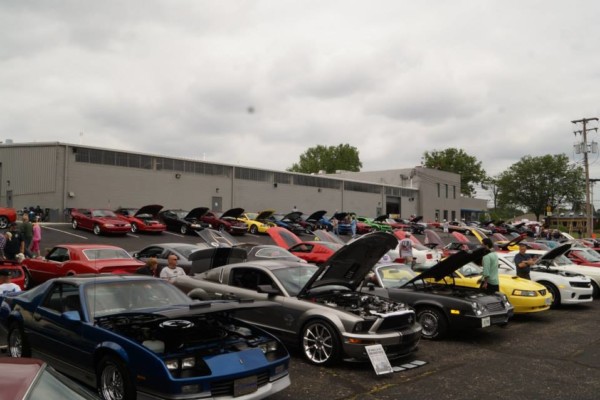 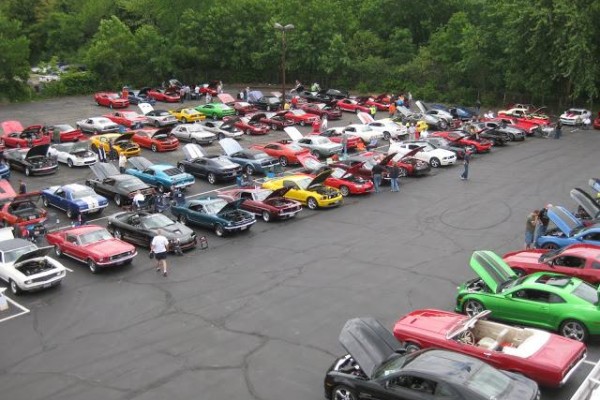 On Saturday, June 3, Bowtie and Blue Oval devotees will converge at Summit Racing’s Retail Superstore in Tallmadge, OH for the 10th Anniversary Camaro vs. Mustang Showdown.

Expect to see row after row of everything from pristine 1964-1/2s and ‘67s to the latest high-powered ponies from Ford and Chevy. Everyone is welcome to bring along their Mustangs or Camaros.

The event brings together members of the NorthEastern Ohio Camaro Club and Mahoning Valley Mustangs for a day of fun and fundraising. Proceeds benefit Aluminum Cans for Burned Children.

Spectators get in free. For $1 per vote, you can help pick the favorite Camaro or Mustang at the showdown.

Coke vs. Pepsi. Ali vs. Frazier. Burr vs. Hamilton.

But if you have even a drop of motor oil coursing through your veins, these run a distant second to the epic battle that began in Detroit, MI and spread coast-to-coast more than 50 years ago:

Camaro vs. Mustang, or Mustang vs. Camaro — depending on your allegiance.

“There has always been a rivalry between ‘Ford guys’ and ‘Chevy guys,’ but I think the introduction of the Mustang and Camaro in the pony car war of the ‘60s allowed more people to afford their dream sports car,” said Gary Zemba, historian for the NorthEastern Ohio Camaro Club (NEOCC). “Innovation, styling, and just plain brand loyalty have contributed to the rivalry over the years.”

Bowtie and Blue Oval devotees will converge at the Summit Racing Retail Superstore in Tallmadge, OH for the 10th Anniversary Camaro vs. Mustang Showdown.

The show will bring together members of the NEOCC and Mahoning Valley Mustangs (MVM) for a day of awards, a 50/50 raffle, door prizes, Chinese auction, music, and food. All are welcome to display their Camaros and Mustangs of any generation. Registration is a minimum donation of $5 per car. Spectators get in free. For $1 per vote, you can help select the favorite Camaro or Mustang at the show, with proceeds benefiting Aluminum Cans for Burned Children (ACBC).

With Berlinettas and Bullitts parked side by side, the event should also include plenty of spirited discussion about which pony car reigns supreme.

“We always get a wide variety of both Camaros and Mustangs, from stock to outrageous, from clean daily drivers and pristine trailer queens to quarter-mile drag cars,” said NEOCC president Morgan Iorio.

“If it was made, you have a good chance of seeing it,” said MVM chairman Nancy Evans. “There will always be Shelbys and Z28s, but you may see original classics and brand-new models next to each other, or a fabulous paint job that blows your mind.”

Evans will bring along a vintage ride that launched her love for all things Mustang five decades ago.

“My husband Don’s first new car was a 1965 twilight turquoise Mustang hardtop,” she said. “We drove it away from our wedding with cans hanging from the back and ‘Just Married’ written on the window with Glasswax. We now own an identical Mustang, except it has a bigger engine. And we’ll be celebrating 50 years of marriage this fall.”

“There is always room for another Camaro in my collection,” he said.

The Camaro-Mustang showdown kicked off in 2008 when then-presidents Bob Macabobby (MVM) and Chris Slocum (NEOCC) joined forces to organize the charitable event.

This event has raised more than $20,000 for groups such as the Easter Seals, Make a Wish Foundation, and ACBC, all while fueling a great deal of comradery between the two clubs.

“In addition to the lasting friendships I have made through the years, my favorite part of the annual showdown is seeing lots of cars come out to support such an important cause,” Iorio said. “The chosen charity each year is the true champion of this event.”

Good fellowship aside, the great pony car debate will continue as long as there are Bosses and Bumblebees sharing the same roads.

Zemba summed it up this way:

“It’s interesting, and rather amusing, to note that in the years the event is hosted by MVM, it is advertised as the Mustang vs. Camaro Showdown, and in the years that NEOCC hosts, it’s called the Camaro vs. Mustang Showdown.”

The NorthEastern Ohio Camaro Club has been promoting the Camaro as a hobby and doing philanthropic work since 1994. The club has 304 members who own more than 430 Camaros, from ‘67s to late models. Membership is open to all, whether or not you own a Camaro. The club is sponsored by Sarchione Chevrolet in Randolph, OH. For more information, visit www.neocc.org or the NEOCC Facebook page.

In its 22nd year, Mahoning Valley Mustangs welcomes owners of all generations. The group holds monthly activities, hosts shows, and supports local causes. Evans said the group’s 135 members “like to spend a lot of our summer days on tours and cruises driving our Mustangs.” For further details and contact information, visit mvmustangs.com.

One response to “Mustang vs. Camaro Rivals Converge to Raise Funds for Child Burn Victims”