Kellen Allemani first contacted us with hopes of getting his boss’s truck on the cover of a Summit Racing Equipment catalog.

“Maybe a cover shot or feature in a magazine!?” he wrote in early February. “Either way [it] would be awesome to get featured on the website even.”

Little did he realize at the time, Travis Evans’ 1969 GMC C1500 would be voted Top February Fan Ride one month later.

Evans purchased the truck in 2008. He has worked on several project vehicles for customers, but the ’69 GMC was the first project of his own. And it was definitely a project.

Evans spent seven years turning the 1969 GMC into the show and pleasure beauty that it is today.

“At the time of purchase it was a long bed farm truck that was not running,” Evans told us. “I began work on it in 2009, starting with shortening the frame, box, and fabricating a new smooth bed liner. The rear wheel wells were widened two inches. On the cab I removed the drip rails, body seams, door handles and wing windows. The wiper cowl has been smoothed and the front end was replaced with a ‘67 GMC hood and grille (which has been modified and welded to the fenders and front roll pan).”

But Evans didn’t stop with the truck’s body.

“The motor is a 350 full roller with Brodix aluminum heads and Comp Cams 610 lift cam,” he said. “The truck is on air suspension rolling on Raceline 20-inch wheels and Toyo tires.

“Truck was frame-off restored and painted top to bottom in custom Planet Color pearl yellow with a custom silver frame. It was completed July 2016. Thank you, Summit Racing, for the great parts you provide and always-exceptional service. This would not be possible without you.”

While it was Evans’ truck that was voted Top February Fan Ride, it was Allemani’s suggestion that got the vehicle on Summit Racing’s Facebook page. Allemani works for Evans at Mr. Touch Up Inc. Body Works in Spokane, WA. Evans is the owner of the shop.

“He’s the greatest boss ever,” Allemani told us of Evans. 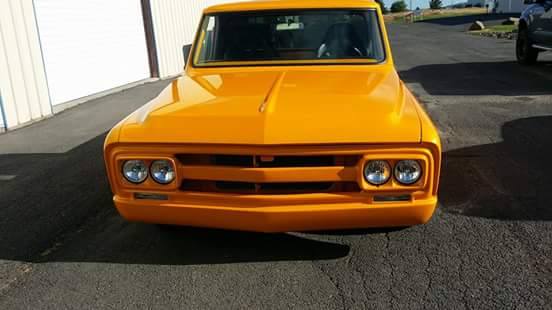 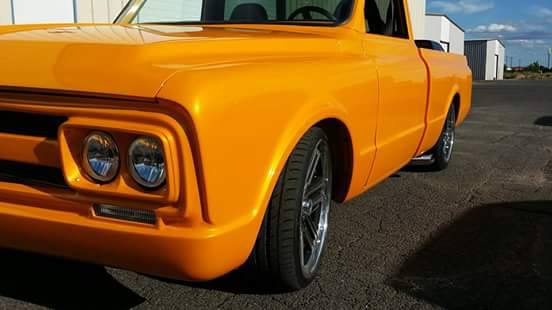