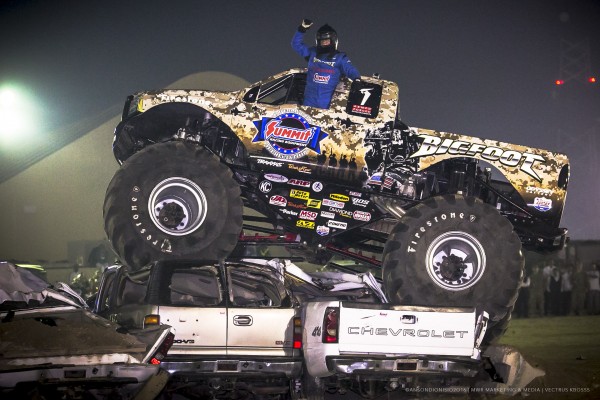 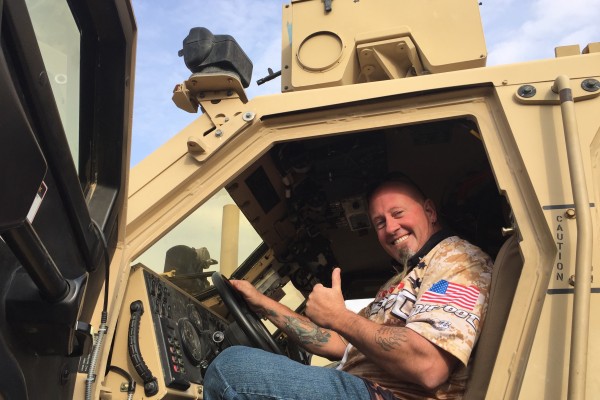 Dan Runte and the Summit Racing BIGFOOT 4x4 Monster Truck paused after crushing pickups at the second show for the troops at Camp Beuhring in Kuwait. The nearby military installations bussed in off-duty troops so that they could enjoy the show as well.

Summit Racing BIGFOOT 4x4 driver Larry Swim settled into the cab of a different kind of monster while on the Operation Appreciation tour to visit troops on deployment in the Middle East.

The Summit Racing BIGFOOT 4x4 Monster Truck looked right at home between two massive tanks at Camp Beuhring, where the troops gathered before a re-enlistment and promotion ceremony.

Troops in the motorcade at Camp Beuhring gathered around the Summit Racing BIGFOOT 4x4 Monster Truck.

Dan Runte talks to the troops from on top of one of the tanks in the motorcade at Camp Beuhring.

Troops snap a photo in front of the Summit Racing BIGFOOT 4x4 Monster Truck when it comes to visit the motorcade.

Summit Racing BIGFOOT 4x4 Monster Truck drivers Larry Swim and Dan Runte were joined by the Operation Appreciation team at the re-enlistment and promotion ceremony at the motorcade. Swim and Runte were honored to hold the American Flag behind the soldiers at the center of the ceremony.

The Summit Racing BIGFOOT 4x4 Monster Truck got a little dust on the tires as it drove from the motorcade to the flight line at Camp Beuhring, where it parked next to a mighty Chinook, shown, and a Black Hawk helicopter in a once-in-a-lifetime photo op.

While on the flight line, the troops brought out the cables that they hoped to use to lift BIGFOOT with the Chinook. Although the lift did not, ultimately, come to fruition, there was an air of excitement as the troops contemplated the feat.

Commander Lt. Col. Leung introduced the Summit Racing BIGFOOT 4x4 Monster Truck to the troops on the second night of the show.

Dan Runte prepares to drive away from the stage and start the second show with the Summit Racing BIGFOOT 4x4 Monster Truck.

Swim got his start as a young man in the world of Monster Trucks through a friend whose father had a truck in the 1980s. The friend’s dad put him to work, tinkering on engines in the evenings and on weekends, and it spiraled from there. He was first asked to drive one of the beasts when someone else he helped was unable to make a commitment one evening, and filling in for that driver turned into a full-time gig. When BIGFOOT called, Swim was ready.

Runte and Swim have both driven a BIGFOOT Monster Truck for years, and when Runte hung up his driving gloves this past April, it was Swim who took over on the truck that he had previously piloted.

In the early stages of organizing the 2016 Operation Appreciation tour, the outline of a great plan began to come together. Through a collaboration with the BIGFOOT team, Summit Racing and Armed Forces Entertainment organized the transport of the Summit Racing BIGFOOT 4×4 Monster Truck to Kuwait so that Runte could put on a spectacular set of shows for the troops at Camp Beuhring. Everyone involved knew it would take a team to pull off the wild stunt, and in addition to Swim being added to the roster, so were crew members A.J. Straatmann and Bryan Bertoletti.

Nothing says America like Monster Trucks, and Swim was honored to join the Operation Appreciation tour to bring a little bit of home to the troops. Here are his thoughts on the experience:

“Dan has done this five or six years, and every time he comes back, he talks about it. But now I know you really can’t appreciate it until you’ve lived it. Being here, you really have a respect and understanding for what the men and women here do, and you get to see their love for what they’re doing. We’ve had the chance to talk to so many people, and they all have that same love and determination. This has been a really cool experience, and I’m proud to have lived it. Not many people get to do something like this, so I feel really fortunate.

Before the second BIGFOOT show at Camp Beuhring, we went over and met with some guys who were re-enlisting and getting promotions in the motorcade. It was an honor to witness the ceremony, but they actually included us by asking Dan and I to hold the American flag behind them. I had chills when they asked us to do that. It was really very special and something I know we will never forget.

After that, our group went to the simulated gun range where the men and women serving go to practice, and they let us play with the simulated rifles. It was really neat to see all they have – so many different weapons that they can train on without using live ammo. It has the kick as if you’re really shooting a gun, and they have several different scenarios to train with. It’s awesome to see the technology that our government uses to prepare our troops.

Then we returned to the flight line, and we got to bring BIGFOOT over there and park it between a couple of helicopters. That was really cool. They wanted to lift the Monster Truck with the Chinook, but we couldn’t get it worked out that quickly with all of the rules and the processes that are in place for good reason. It would have been neat to see, but just having BIGFOOT out on the flight line was cool. Not many people can say that they’ve seen anything like that – I know I hadn’t – and all of the troops with us out there were pretty excited. This whole trip has been an experience that I’ll never forget, and I’m just glad to be part of it.

That night, we had the second show with BIGFOOT at Camp Beuhring. There was a lot that went into making this happen, and we all just wanted everything to work out. A lot of people put their heart and soul into making this happen – from Summit Racing and Armed Forces Entertainment to our support here at the base and back home at BIGFOOT. This has been talked about for a long time, and there was a lot of paperwork and logistics involved. We weren’t sure this would ever really happen, but when we found out that it would, it was just like, ‘Oh my gosh, this is amazing. A monster truck on a military installation in the Middle East.’

There are always things that can go wrong; these trucks get abused every weekend, and sometimes they break. But we brought over our top notch guys to work on it, and they went over everything with a fine-toothed comb. There is always a chance that you won’t be able to finish because something silly goes wrong, and this would not have been the place for that. There was a lot on the line, but to come out here and perform for the troops was pretty cool. I wasn’t driving, Dan was, but I still had butterflies in my stomach. When we saw the reaction, it was pretty cool.

A lot of soldiers came up afterward to tell us how they’d brought their kids to shows in the past or remember seeing BIGFOOT when they were a kid, and now they get to see it here in Kuwait where they’re serving. They were thanking us, but we should be the ones thanking them because they’re out here doing what they do. What we did to get the truck here was just a small part of showing them the appreciation that we feel. It was our honor.”