Failure to Clutch: When the Going Gets Tough, A Twin-Disc Clutch Just May Be Your Answer 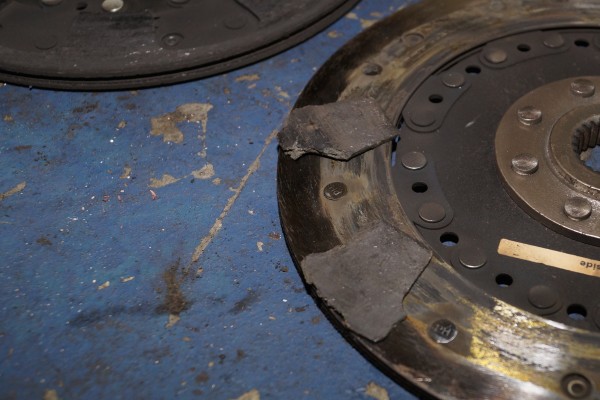 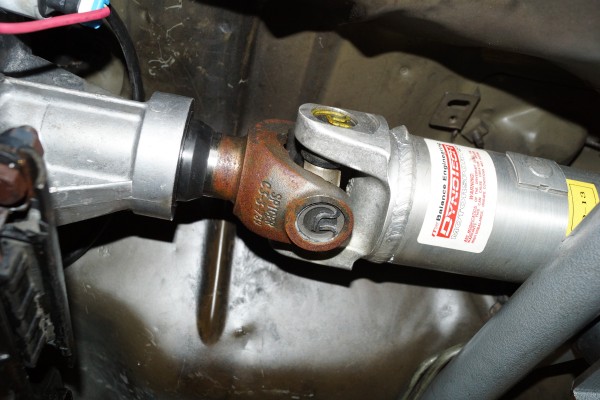 If your powerplant is overpowering your clutch assembly, it may be time to step up to a proper dual-disc clutch.

After disconnecting the negative terminal of the battery, you’ll also need to remove the exhaust system and then the driveshaft. Save yourself the ATF shower and order the proper tail shaft plug for your transmission. While this is a good time to drain and change out the trans fluid, there will still be some residual fluid that is destined to come out of the tail shaft, and that’s a smell that’s tough to get out of clothes.

Next you’ll need to disconnect the clutch cable from the clutch fork.

Space is at a premium on a Fox Mustang, especially after you’ve crammed a T56 transmission and long-tube headers in the car. Transmissions are not light: 75 lbs for a T-5, 100 lbs for a Tremec TKO, and a solid 125 lbs for the T-56. A trans jack is advisable; it will make wresting it back in much easier.

On some cars like the Fox Mustang, it is sometimes easier to access the starter bolts from the front of the car using a series of extensions.

Any time you are doing something major on your car, disconnecting the battery is always a good idea. Since we’re removing the starter on this job, this is essential given the heavy electrical load going to the starter.

Depending on your choice of exhaust header, you may need to loosen or remove one or both to get the bellhousing out. We only had to loosen the passenger header.

After removing the clutch, the flywheel is next. You’ll need to break out the impact gun as the fasteners are torqued quite a bit and thread-locker is employed to make sure they don’t back out.

Now is a good time to inspect the rear main seal and pilot bearing/bushing and replace as needed.

This is the new Ram Force 9.5 twin-disc clutch assembly that is going in. It retails for $974.97 through Summit Racing Equipment. Like a normal single-disc system, you’ll find a pressure plate and flywheel, but you’ll also find two friction discs and a floater plate that resides between them.

With the Force 9.5 from Ram, you will find that the floater plate is strapped to the flywheel, as noted by the three greenish metal plates seen in this picture. This design prevents the floater plate from rattling, which has been a drawback compared to the systems that use a series of metal stands. The downside is less holding capacity, but the Force 9.5 clutch assembly still holds roughly 700 ft.-lbs. of torque.

Most high performance clutch assemblies are balanced at the factory and marked so it is easy to identify how to install the components in the vehicle.

If the stack height of the clutch assembly you are using is thicker than stock, you may need to trim down the bearing retainer to create the needed space between the clutch discs and the retainer. With the T56, the front cover needs to come off so the retainer can be milled down.

You can do some measurements outside the car, but installing everything (or attempting to) will tell you yay or nay on the depth. Ram recommended trimming the retainer to provide a quarter-inch of clearance.

Another item to check during installation is the clutch fork positioning. An adjustable pivot ball may be needed to locate the fork on the bearing retainer so that it engages the throwout bearing properly and doesn’t come in contact with the belhousing

A clutch disc installation tool often comes with new clutch assemblies, but they can also be found for a reasonable price at your local auto parts stores. An old transmission input shaft will work also, but we’re guessing most people don’t have spare transmission parts lying around.

As you slide on the clutch discs and pressure plate, it’s important to make sure that the install tool continues to slide in and out easily and that the clutch isn’t binding it up. This will make sliding the transmission in much easier.

You’ll want to check with your clutch manufacturer and/or service manual on the torque specs for the flywheel and clutch fasteners. Some companies also have a specific torque sequence pattern to follow as well. Now it’s time for the bellhousing, transmission, exhaust system and driveshaft and you’re back in action.

When a clutch fails, the damage can manifest itself in a number of ways. Sometimes you feel the power taper off at the top-end of the rpm band during a full-throttle blast. Sometimes it slips right away as you take off from a dead stop, and you hear the engine doing lots of work, but the car is barely moving. No matter what your car does, though, if it’s not holding all of the available engine power and torque that we all enjoy so much—it’s time for a clutch replacement.

Most clutches these days utilize a single clutch disc between the pressure plate and the flywheel. Race cars have used multi-disc systems for a number of years because of their superior holding power and lightweight design. Over the last several years, many clutch manufacturers have started offering twin-disc clutch assemblies for high-horsepower street applications.

A twin-disc clutch in a street application solves a number of issues that a single-disc setup ends up generating in order to keep up with the clamping demands. Cars are heavier today, and moving that weight is an added stress to the clutch disc. With today’s modern muscle cars, there’s really no limit to the horsepower and torque that one can make other than their pocketbook. Power adders in the forms of turbochargers, superchargers, and nitrous oxide systems allow people to keep a modicum of drivability for the street, while providing a wicked power increase for optimum performance on track. So now that single clutch disc has more weight and more power to contend with.

For a single-disc clutch, changes can be made to the strength of the pressure plate to provide the holding power necessary for heavy and powerful vehicles, but this results in a heavier pedal effort. Changes to the friction material can help, but the drivability of some of these materials comes into question with some chattering or acting like on/off switches with poor drivability. It’s possible that if you’re building your car for all-out track performance that these are small prices to pay, but some people want the proverbial cake and to be able to eat it, too. That’s where the twin or dual-disc clutch comes into play. You’ll find many OEMs are now employing these clutches in cars like the Shelby GT500, Corvette ZR1, Cadillac CTS-V, and Camaro ZL1.

Most twin-disc clutches employ a smooth-engaging, organic compound on the clutch discs to maintain great drivability and engagement while providing increased holding capacity via the increased surface area of the two clutch discs. Clutch companies and racers being what they are, you’ll find twin setups that go a step further with more aggressive friction materials, but a standard twin will usually hold up to 700 ft.-lbs. of torque or so, and that has a great majority of the hottest street cars covered.

The subject vehicle for this article is a highly modified Fox body Mustang that makes over 630 rear-wheel horsepower. Since it spends most of its time stretching out the gear spreads of its T-56 transmission thanks to its supercharged Windsor powerplant, drivability is paramount. When the clutch failed, the owner looked to a twin-disc clutch assembly to provide adequate clamping force while still being easy to drive on the street.

RAM Clutches has been in the drivetrain engagement business for years and the company offers a multitude of clutch options. The Force 9.5 dual-disc (part # 75-2255) is what we chose for this application. This clutch assembly uses organic compounds on the clutch discs for smooth engagement, yet the extra surface area of the twin design is able to hold roughly 700 ft.-lbs. of torque. Pedal effort is light–almost as light as a stock 5.0L clutch, if not lighter. This particular clutch also works with the 26-spline input shaft of the Viper-spec T-56 transmission in the car, as well as the 28-ounce imbalance of the Windsor engine.

Something else that you’ll want to look for and consider when shopping for a twin disc clutch assembly is the way the floater plates are secured in the assembly. Some are strapped while others float around stands. The strap versions are generally quiet like a stock clutch, while the floater versions have a tendency to produce a slight rattle at idle when the clutch is pushed in. If you’ve got a rowdy street machine with a loud exhaust and big camshaft, then you might not notice the rattle at all.

One other thing you’ll need to look at is the stack height of the clutch assembly. This is the thickness of the assembly when it is bolted together. Some twin-disc setups are thicker than stock clutch assemblies, and if this is the case in your application, you may need to trim the bearing retainer on the input shaft of the transmission to prevent it from pinching the clutch discs to the flywheel when you go to install the transmission. If this happens, the clutch will never release and failure will be imminent. The latest T-56 Magnum gearboxes can run into this issue with the RAM twin in particular, and modifications will need to be made to the bearing retainer to provide adequate clearance. You may also need to clearance the front of the transmission case to provide room for the clutch fork if you happen to be going the mechanical-cable route. In this case, we were spared the case mods as the older Viper version doesn’t have the beefy support ribs that the Magnum does.

With all of that out of the way, all that is left is installation and break-in. Installation is pretty straightforward normal clutch business, once the transmission mods (if needed) have been done. Break-in time depends on the manufacturer. Much like bedding in a new set of brakes, proper clutch break-in gets the friction surfaces operating at their optimum. Some companies may require 250-500 miles of stop-and-go driving, and no full-on boosted blasts until you have achieved that milestone. RAM doesn’t require a break-in time, though it does recommend putting the clutch through several heat cycles before subjecting it to severe use.

When it comes to clutch shopping, the Internet forums can offer reviews and opinions, but you should always talk to the manufacturer to see what they recommend for your application. Be honest with your car’s performance and your driving style, otherwise you may end up with something inadequate and you’ll be back under the car pulling the gearbox out again. And wouldn’t you rather be driving?

Check out the photo gallery and captions above to see what is involved with a twin-disc installation. If you have a high-horsepower hot rod but like to take your spouse or favorite buds out on the town, you can do both enjoyably.

One response to “Failure to Clutch: When the Going Gets Tough, A Twin-Disc Clutch Just May Be Your Answer”