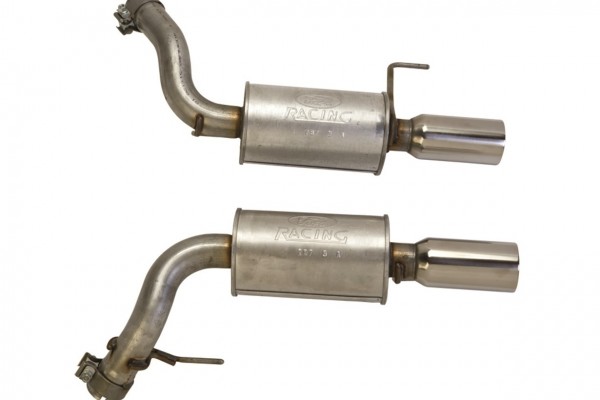 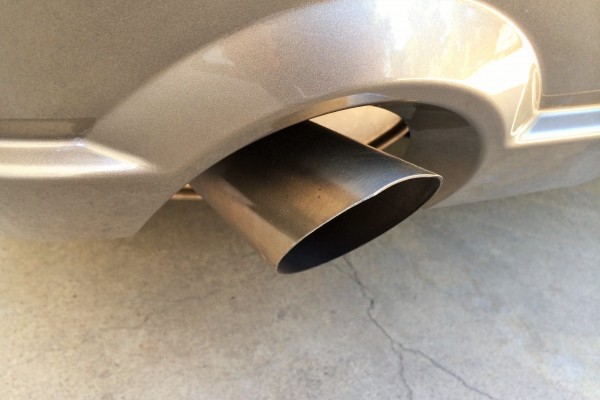 Searchable in Summit Racing’s online catalog as with PN: M-5230-S, these aluminized 409 stainless steel Ford Racing mufflers with polished 304 stainless 3.5-inch diameter tips were original equipment on the FR500 racers and the GT500KR.

2005-’09 Mustang GT’s and GT500’s all use the same muffler with slash-cut stainless steel tips. Theses mufflers have a good mellow tone and flow quite well for factory original.

We love many things about S197 chassis Mustangs (2005-2014), but one of the best is the simplistic muffler swap due to the mounting of the mufflers to just behind the rear bumper cover. This was primarily done to relocate the fuel tank to in front of the rear axle for better weight distribution and overall crash safety, but it makes life easy for us!

We always endorse safety here at OnAllCylinders, so after using the rearend housing to lift the rear of the car via a hydraulic jack, place a jackstand on the axle tubes on both sides of the car.

Rather than being welded into place, the mufflers on Mustangs are secured with a large band clamp that is easily released with a ratchet and socket. It’s almost like they knew this swap was a given! Loosen this bolt first.

There are two rubber isolators that the mounts from the muffler hang from. This one is located at the inlet of the muffler. There is one bolt that goes into the bottom of the framerail, and one 90 degrees from it just inside the isolator. It’s possible to leave the isolators bolted into place and wiggled the muffle rout, but it’s far faster and easier to just unbolt them.

The second mount is at the exit side of the muffler just inside the bumper cover. Just like the forward mount, there is one bolt on the bottom of the framerail and one just inside of the isolator. When these are removed, the muffler will droop slightly, but the tailpipe will hold it in place.

With the clamp loosened and the isolators unbolted, it’s only takes a few small wiggles and tugs and muffler will slide right out. At this point we’ve spent maybe 10 minutes on the job!

Here is the stock muffler next to the FR500. The large size difference is the most noticeable change, which actually reveals another big benefit of this upgrade over most; weight reduction.

The stock muffler weighs in at 16.5 pounds, or 16 even without the isolators installed.

The FR500 mufflers, however, only tip the scale at are just a bit over 12.25 pounds. That’s an 8-pound total reduction off the rearmost part of the car. It may not sound like much, but that’s a big deal in the racing world these mufflers were designed for.

The stock isolators slide onto the FR500 mounts and installation is as simple as sliding the muffler inlet pipe over the exhaust and bolting the 4 isolator bolts back into place. Looks at all that extra room! Install actually goes so much faster than removal since the FR500 muffler leave so much room for swing a ratchet. Tighten the isolators, but eave the inlet pipe clamp loose for adjusting the positon.

Once both mufflers are installed, use the rear bumper cover as a reference point to slide the muffler back and forth a bit to ensure they extend evenly from each side. The passenger side pipe has a handy indexing notch that establishes depth, but the driver side will need to be adjusted to match.

The perforated holes inside the FR500’s exhaust tips are part of the key to its droneless demeanor since they work to change the frequency content of what comes out the tip.

There’s a common checklist of parts and upgrades that every late model Mustang enthusiast wants to get for their car, and right at the top is almost always a good set of mufflers. That’s not to say that Mustangs don’t sound good from the factory. Quite the contrary, they always get positive reviews from the automotive press, and we happen to know for a fact that the Mustang team puts a great deal of time into making sure they always ‘sound like a Mustang should.’

Still, they do have to market them to the general public, which means they tend to opt for a much more hushed tone than most hot rodders and racers enjoy. That’s ok with us, though; it just makes sure our cars stand out and get noticed! To support that desire, the aftermarket always quickly steps up to offer a full complement of upgrade options with many companies offering multiple choices. It’s honestly hard to know where to start sometimes.

What it all really comes down to is sound preference. Unlike the old days, the stock mufflers on Mustangs are quite good from a power production standpoint, so just a few extra horsepower are to be expected from cars with mostly bolt-ons parts. Extremely powerful forced induction combos might see a bit more, though. Still, having a car that sounds like we imagine it should adds a lot to the driving experience.

In a daily driven Mustang, in which you spend a great deal of time doing mundane commuting, you have to walk the line between aggressive, enjoyable sound and something that’s only tolerable for short periods of time. If you’re not careful, you could end up with a package that distracts from the driving experience rather than enhances it. Our biggest rule of thumb is to look for mufflers with a low cruising tone and little to no cruising speed drone. There’s really nothing that can ruin a nice long drive like an exhaust tone that’s reverberating and overbearing.

There are several great options in the Summit Racing catalog that fit this bill, but one of the best is one of the most unexpected: Ford Racing’s FR500 mufflers. You would think that a part designed and engineered for Ford Racing’s turnkey FR500 racecars would be far too aggressive for daily street driving, but the opposite is true. It’s one of the most livable muffler options out there. The exhaust tone is nearly exactly the same as stock on 3V 4.6 powered GT’s, just a bit louder under acceleration. At idle it’s just a bit deeper, and there is absolutely zero drone at light throttle and highways speeds. It really is the best of both worlds.

We recently installed Ford Racing FR500 mufflers on a 2005 Mustang GT. See how the process went by scrolling through the slideshow above. Below, you can listen to our Mustang before and after the installation.

Christopher Campbell has been heavily involved in the automotive world since he began building his first car, a 1967 Ford Ranchero, with his dad at the age of 14. That started a lifelong passion with custom hot rods and muscle cars. After graduating from Cal State Long Beach, he went to work for HOT ROD magazine as Associate Editor. From there he became Technical Editor at Popular Hot Rodding magazine. Currently he creates freelance content for OnAllCylinders as well as many diverse enthusiast magazine titles such as HOT ROD, Muscle Mustangs and Fast Fords, Mopar Muscle, Super Chevy, Mustang Monthly, and 8-Lug.