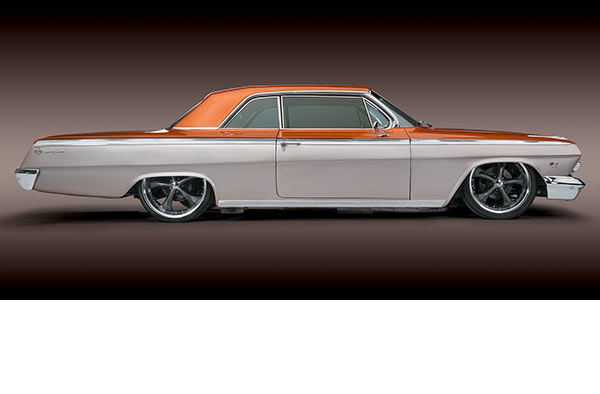 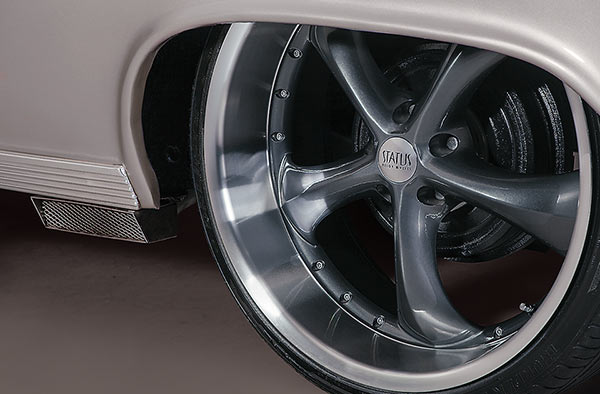 A spectacular two-tone paint job and a ton of hot rod attitude-talk about a winning formula! Rodgers kept the exterior mods to a minimum and let the Impala's original style shine through. The Chevy's lowdown stance comes courtesy of a RideTech CoolRide air bag system.

The Impala's competition-inspired rectangular side exhaust tips are a cool feature that's easy to miss. "I built those in my garage using just a flat hammer and a vise," Rodgers said.

Rodgers swapped out the original numbers-matching 327 in favor of a carbureted 4.8L LS1 racing engine. He also painted the factory ignition coils to match the Chevy's Copper exterior. So where's that 327 now? "Oh, it's on an engine stand in my garage," Rodgers said.

When Rodgers bought the SS, the interior had been eaten by a barn full of mice. Now it's a feast for the senses thanks to yards of custom sandalwood leather and the impeccable sewing skills of Dennis and Shane Gamble.

Even though Rodgers updated the sound system with a retrofit radio and added speakers in the kick panels and package tray, he retained the Chevy's original rear speaker grille. It's a fitting tribute to the Impala's original design aesthetic.

There's a whole lot of wheel and Falken rubber tucked under the Impala's back fenders. "I wanted big wheels, but I didn't want to tub the factory wheelwells," Rodgers said. "There's not much room to spare when I lower the car all of the way."

Bigger wheels and plenty of LS1 power under the hood meant the stock front drum brakes had to go. Late model GM rotors and calipers give the classic Impala sure-footed braking performance.

It’s not unusual for a schoolboy to fall in love–with a car that is. Whether it’s drop-dead good looks, a sultry silhouette, or a sweet voice.

The first car to catch a young boy’s eye is bound to leave a powerful impression.

“My teacher had all the right curves and she drove a ’62 Impala SS. I decided we’d get married someday and I’d get an Impala just like hers,” Rodgers said.

After graduation, Rodgers put his wedding plans on hold and began to develop his car building skills, working his way through several projects including a sweet 1933 Chrysler Series CO street rod. He also logged some serious seat time as both a competitor and spectator at several local Ohio dragstrips. Years later, while watching some 1/4-mile action in Norwalk, Rodgers would get a chance to fulfill a part of his schoolboy promise.

“I was standing by the fence at Summit Racing Motorsports Park, when the fellow next to me told his buddy he had a ’62 Super Sport and his wife wanted it gone,” Rodgers said.

Seizing the moment, he introduced himself only to learn the car was in a barn just a cornfield or two away from the race track.

“It was a mess and it looked awful. There were mice running in and out of the car and the interior was completely gone. I think the mice ate it,” Rodgers said. “I checked the trunk and floorboards and they seemed solid, but I didn’t really know what I was getting into. I didn’t have a magnet with me, so I had no way of knowing how much of the car was metal and how much was filler.”

As it turned out, the barn-bound SS was a matching-numbers car and it still had the original 327 under the hood.

Rodgers went home and thought about the deal for a while. He called the owner with an offer and then returned to Norwalk with cash in hand and a trailer in tow. He then took the Impala (along with some uninvited guests) back to his home in Huber Heights, OH.

“When I got back, I let the car sit outside for two weeks just so the mice could escape,” Rodgers said.

Once all of the rodents had scurried off into the sunset, Rodgers pulled the SS into his garage and began the painstaking task of dismantling the Impala. “I removed the trim and the bumpers. I had parts stacked everywhere, and my garage looked like a swap meet,” he said.

Rodgers media blasted the bulk of the body and chassis and stripped the smaller parts by hand. What he found under the worn refrigerator-white paint was a pleasant surprise to say the least.

“The car was almost completely rust free! It had some surface rust in the usual places, but that was it,” he said.

Enlisting some expert bodywork advice from his pal Brian Murphy, Rodgers smoothed years of dents and dings from the Chevy’s exterior and got the SS ready to receive its spectacular two-tone finish. We all know choosing a custom color scheme can keep a car guy up at night, so it’s no surprise Rodgers was in bed when inspiration for the Impala’s new look came to him.

“I saw a Dodge Challenger in a TV commercial. I really liked the color, so I went to the dealership the next morning to get a paint chip,” Rodgers said. With the Chrysler Copper color identified, he still needed a complementary color, and it didn’t take him long to find it. “I was driving home and I saw a silver Volkswagen that I really liked in another dealership lot,” he said. “I went in, got the chip, and that was that!”

Rodgers and Murphy tested the color combination on an old truck door, and were somewhat unimpressed with the results.

“The colors were just too dark. Then we added some House of Kolor Pearl to each mix, and the colors came to life,” Rodgers said.

The SS was now wearing a show-stopping finish, and was in need of some equally impressive go power under the hood. Sure, Rodgers could re-install the stock 327 and keep it a numbers-matching car, but he had another idea.

“I got a 4.8L, LS1 from a friend who races trucks,” Rodgers said. “The LS only had a few laps on it, but I opened it up and dropped in a COMP Cams® Thumpr® camshaft anyway.”

“I had planned on painting the wheel spokes to match the top of the car, but I like the way the original dark gray finish complements the lighter silver on the lower section of the bodywork,” Rodgers said.

If you think the Impala’s beauty is only skin deep, just open one of the massive doors and check out the eye-popping interior. The car’s original stainless and chrome interior accent pieces shine like diamonds against the sumptuous sandalwood leather covering the factory seats, door panels, and custom console. A leather-covered Billet Specialties steering wheel adds the perfect blend of old school style and modern hot rod attitude.

No doubt about it, Charlie Rodgers’s 1962 Impala SS is a real class act. From start to finish, it took him about a year and a half to transform a rundown rodent habitat into an A+ custom.

Talk about graduating with honors.

Special thanks to: Danny Hurd and my Godfather, George Wingo, who was my inspiration and lives on in my heart