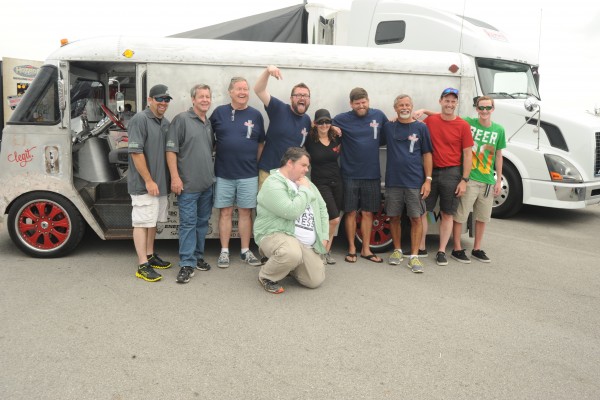 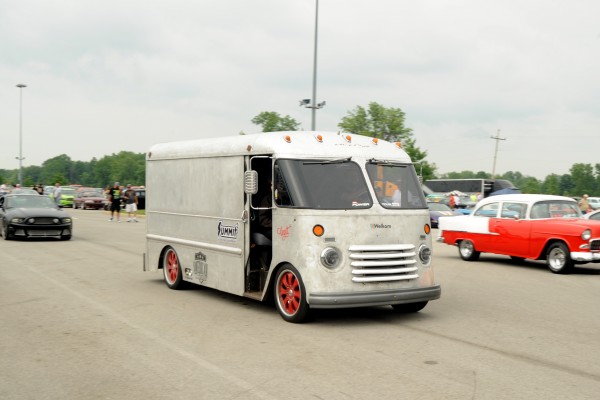 Rutledge Wood and his entourage pulled into Summit Racing Motorsports Park late in the afternoon on Day Four of the 2014 Hot Rod Power Tour. Moments after we shot this photo, Rut’s Chevy Kurbmaster step van was mobbed by fans wanting an autograph and photo with the Top Gear on History host.

The crew, from left: Rutledge’s father Bill; Rutledge; Hot Rod’s Elana Scherr; Rutledge sidekick (and brother-in-law) Adam Young; and Adam’s father Jarrett. Not appearing was Hot Rod’s David Freiburger, who got some seat time in the van on the trip up from Charleston. Cool Summit Racing T-shirts, guys.

Where was Rutledge’s latest ride, the 1953 Plymouth wagon? It went on the Power Tour as well, but not without some, er, challenges. We’ll tell you all about that and the wagon’s final assembly in our next post, coming soon. For now, gaze into this headlight and admire Rut’s friendly mug.

For the second year in a row, Rutledge Wood and his merry band of gearheads did the Hot Rod Magazine Power Tour in his 1949 Chevy Kurbmaster step van. Rutledge did 99 percent of tour from the Knoxville, TN stop to the final stop in Wisconsin Dells, WI. That proves once and for all that a big aluminum box can really haul—provided it’s got a 525 horsepower Chevrolet Performance LS3 crate engine, that is.

We caught up with Rutledge at the Power Tour stop at Summit Racing Motorsports Park in Norwalk, OH. It was only for a minute, though.  As soon as the van came to a rest beside the Summit Racing display rig, people swarmed around to get a closer look and to get a picture with the Top Gear on History star. Believe us, the stories are true—every person who meets Rutledge Wood becomes his friend forever.

“After building the step van with Summit Racing last year, we knew we had to go on the Power Tour again,” Rutledge told us. “We made it a family affair this year—I brought my dad, plus my brother in-law Adam and his dad. The Power Tour is the most fun road trip you can have with a couple thousand friends who love cars like you do.”

Two of Rut’s new friends are David Freiburger and Elana Scherr from Hot Rod Magazine. They got a chance to ride in and drive the Kurbmaster van on the Power Tour leg from Charleston, WV to Summit Racing Motorsports Park.

What about the latest Rutledge/Summit Racing project, the 1953 Plymouth Suburban wagon? It made the Power Tour as well, but there is a story behind its journey that we’ll talk about in the final installment of our Plymouth build series. Yeah, we’re spoilsports.