Ask Away with Jeff Smith: Why So Many Gears in Modern Transmissions?

I’ve noticed that Chrysler is using a new eight-speed automatic transmission for rear wheel drive cars and trucks. I don’t understand how this is more efficient than a more typical four-speed automatic. Plus, with twice as many gears, this transmission has to be really heavy. Care to comment?

It’s interesting how the number of forward gears in cars has continued to grow almost from when the first cars were built. If we only take the ‘60s as a starting point, the most popular automatic GM transmission in 1966 was the Powerglide–a two-speed automatic. First gear used a single planetary and then used clutches to connect the input and output shafts together for high gear. While simple, it was hardly the best for acceleration.

If we leap ahead to this new Chrysler eight-speed, it seems like a huge jump. But in between these two transmissions, ratios have been steadily increasing with four-, five-, six-, and now eight speeds. Why this added complexity? To explain this, we have to look at how an internal combustion engine operates. 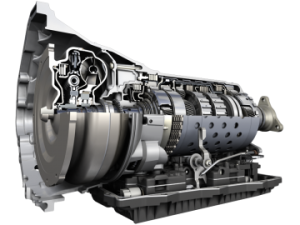 A typical gasoline engine operates at its peak efficiency in a narrow rpm band– generally 100-300 rpm in width. This is called peak torque and this occurs because it’s where the engine produces peak volumetric efficiency. Everywhere else within its operating rpm band from idle to rpm redline, the engine isn’t as efficient in terms of converting fuel into power. At low speeds, the engine doesn’t completely fill the cylinders because of low inlet velocity and a minimal throttle opening (another reason why a diesel is more efficient since there is no throttle on the inlet). Above peak torque at higher engine speeds, inlet and exhaust flow restrictions and a lack of time cuts into efficiency. Besides emissions concerns, new car companies are constantly looking for ways to improve fuel efficiency. This means they have a choice to either use a smaller engine or make the larger engine efficient.

In-town driving is a tough place to improve fuel efficiency, especially with a heavy car since the engine must burn more fuel to accelerate greater weight. You can put in a deeper rear gear (like from 3.08:1 to 4.10:1) but then at highway speeds the engine is not efficient because it must spin faster. A better solution is to use a lower rear gear and a deeper first gear in the transmission. But now you have a big rpm drop between the first three forward gears. That was the problem with the original GM 700-4R four-speed automatic.

The 700-R4’s 3.06:1 first gear was great for acceleration, but with a 1.63:1 second gear, it produced roughly a 50 percent drop in engine speed from first to second. A more acceptable rpm drop between gears would be 30 percent, but to do this requires adding gears. Can you see where we’re heading? By adding a deeper first gear ratio along with more gears in between first and high gear at 1.00:1, we can reduce the rpm drop the engine experiences during the gear change. This means that the engine spends less time struggling at lower engine speeds when trying to accelerate since this lower rpm drop allows the engine to operate in its most efficient rpm range. It also allows the engine designer to concentrate his power within a somewhat narrower range of operation. Remember that a street engine operates from idle to 6,500 rpm. That’s a very wide range to optimize.

Let’s use a couple of examples to show how this works on the dragstrip where we can accurately evaluate how well these additional gears help. We’ll start by emphasizing that every time the transmission shifts, this is an interruption in power to the drive wheels. So more gears means more shifts which must detract from acceleration. Let’s say we have a car with a basic three-speed automatic. Since we’re dealing with Chrysler, let’s use the old Mopar standard 727 Torqueflite which employs a 2.45:1 first, 1.45:1 second, and 1:1 third gears. Let’s also put a strong late model Hemi in front of that Torqueflite and let’s give it 750 horsepower just to make things interesting. We will use Patrick Hale’s QuarterPro drag strip simulation program with a 3,200-pound ’68 Dart (because I like those old A-bodies) with a rear gear of 3.73:1 as a compromise between the dragstrip and the street. We’ll add a 3,200 rpm stall speed converter and good tires so we have no tire spin to affect results. The results from the QuarterPro gave us a 9.72 at 140 mile-per-hour–which is a great run. What we’re interested in is the rpm drop resulting from the gear changes. For first-to-second, we shifted at 6,900 rpm and the simulation’s rpm recovery point was 4,100 rpm–a drop of 2,800 rpm or 41 percent. That’s huge, especially because peak torque occurs at 4,800 rpm. This means the engine will struggle just to get back to peak torque.

The beauty of bench racing is that we can bring our theoretical Dart back to the pits and instantly swap in that new Chrysler (it’s actually built by Germany’s ZF Friedrichshaven, ZF for short) 8HP 90 transmission which has those eight forward speeds. We’re only going to be interested in first through fourth gears. The gear spread looks like this: 4.71:1, 3.14:1, 2.10:1; 1.67:1 1.29:1, and 1:1 in sixth gear!

What jumps out right away is what happens to the effective first gear ratio with a 4.71 First gear times a 3.73:1 rear gear. That’s a 17.5:1 overall first gear. To equal that for the original Torqueflite we would need a 7.16:1 rear gear! So right away, the simulation tells us that we’re shifting into second gear a scant 20 feet out. But that’s what that a deep gear does for acceleration. Since the gear spread is much narrower, the rpm drop between gears is radically reduced. We use all six gears to get through the quarter-mile and our theoretical Dart has just run a much quicker 9.29 at 142.4 mph with a 60-foot time of 1.27. Right away we can hear the skeptics say: “Hey, where did the mph come from? You added horsepower to make that tranny look better.”

The truth is, we didn’t have to add power. We just used the existing power more efficiently by reducing the rpm drop between gears. Sure, the deeper first gear helped acceleration–that’s the plan. Use a deep first gear to get the car moving without having to use a steep rear gear ratio. The Chrysler 300 SRT8 only needs a 3.08:1 rear gear and in the 2014 Corvette the performance gear ratio with the 6L80E six-speed is 2.73:1. The standard rear gear is 2.56:1. But remember, the 6L80E has a 4.03:1 first gear.

Beyond the advantage of a deep first gear, the engine rpm does not drop nearly as much with each gear change as it does with the three speed auto. To maximize acceleration, you really would like to run an engine right at peak horsepower all the time. That would be possible with a continuously variable ratio transmission where you would launch the car at peak horsepower and as the car accelerated and gained speed, the transmission would be continuously numerically lowering the overall ratio. By increasing the number of gears in the transmission, the OE’s are moving in that direction in an attempt to keep the engine in or near its’ peak torque and horsepower numbers. As to why our theoretical Dart’s trap speed improved by 2 mph, that’s because we applied more average power to accelerate the car down the quarter mile. We didn’t have to add power, we just used the engine’s existing power more efficiently. It’s as simple as that.

10 responses to “Ask Away with Jeff Smith: Why So Many Gears in Modern Transmissions?”