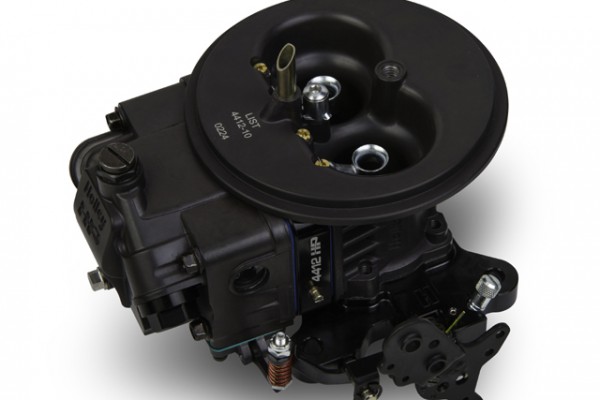 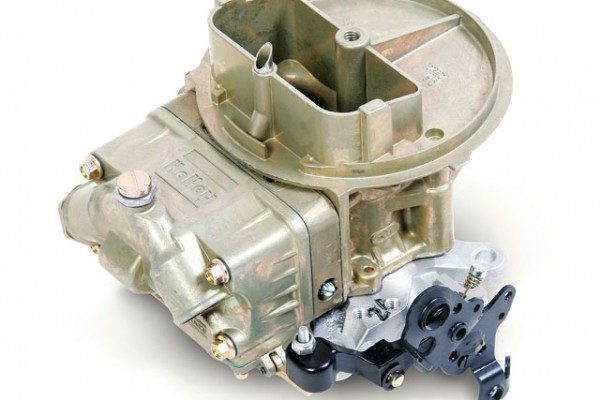 The older style #4412 is still available, but you can see the huge difference in appearance and design between it and the new Ultra XP Carburetor.

One of the most noticeable differences on the Ultra XP 2-Barrel Carburetor is the missing choke tower, centered air cleaner flange and large 1 3/8-inch venturis.

The base and body of the Ultra XP 2-Barrel Carburetor are all manufactured from aluminum that saves nearly 50 percent in weight. A 30cc pump and anti-siphon valve in the main body reduce pump pull-over.

The fuel bowl holds 20-percent more fuel, and features dual clear sight plugs, an extended -8 AN fitting with O-ring and can be plumbed on either side. In addition, it has a large drain plug and internal baffles to prevent fuel from sloshing around.

The billet aluminum metering block features screw-in restrictors and emulsion bleeds for infinite tuning capabilities. An internal pump passage with a bleed-off can be fine-tuned.

Various rules for Late Model Stock classes require using a two-barrel carburetor to limit the total amount of horsepower on V8 engines. Because it flows 500 cfm, Holley’s #4412 two-barrel carburetor has become the go-to carb for many racers in these classes. But considering the carburetor was originally designed for use on a big-block engine in a Ford pickup, it has traditionally required a few modifications and a bit of tuning to become truly race-ready.

Now Holley has introduced a race-ready version of the #4412: the Ultra XP 2-Barrel Carburetor. This new carb delivers many of the same features and benefits as Holley’s 4-Barrel Ultra HP Series carbs in a two-barrel design.

Compared to the older #4412 carburetor, the most noticeable differences on the Ultra XP 2-Barrel Carburetor are its all-aluminum construction which reduces weight by 50 percent, the centered air cleaner flange, and the elimination of the choke tower which leaves the 1-3/8-inch venturis unobstructed for maximum airflow. A knurled curb idle screw, which can be easily adjusted by hand, makes tuning at the track much easier, and the easily accessible air-bleeds have been moved outward for better airflow transition. The billet aluminum metering block is equipped with screw-in restrictors and emulsion bleeds for infinite tuning ability and features an internal pump passage with a bleed-off that can be tuned for optimum performance. The pump circuit also features an anti-siphon valve in the main body to reduce pump pull-over.

The carb’s throttle blades can also be adjusted with a set screw for wide-open throttle, and the PTFE-coated throttle shaft rides on a sintered bronze bushing that is oil impregnated for consistently smooth operation. The throttle shaft is also capped off to prevent dirt or debris from entering.

According to Holley, short track testing prior to the launch of the carburetor yielded a consistent reduction in lap time of 1/10th of a second right out of the box, with no tuning or adjustments. This race-ready carburetor is also approved for use in NASCAR Late-Model divisions in the Mid and West Coasts and is pending approval on many other race sanctioning bodies. Holley also says it’s working on producing an E85 specific calibration soon.

Aside from its tuning capabilities and consistent performance, the Holley Ultra XP 2-Barrel carburetor comes with a polished or Hard-Core Gray hard anodized coating for winning looks, too.