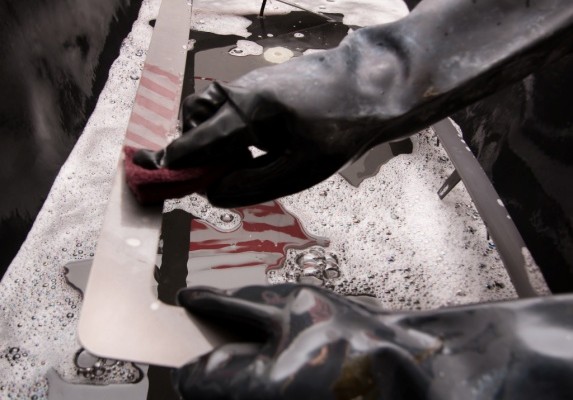 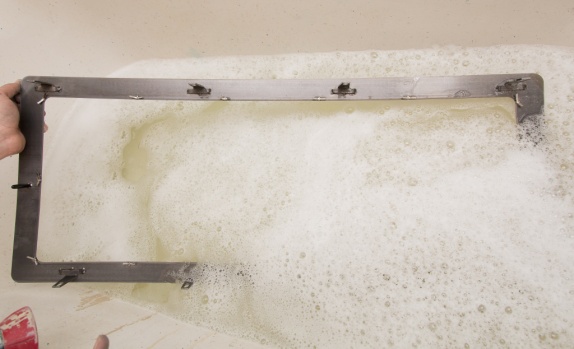 Surface preparation is key in the hydro dipping process. Here, the T-REX grille frame is chemically etched to remove all surface contamination. Surface contamination results in adhesion degradation and finish flaws. All processing after degrease is performed with latex gloves to avoid contamination.

The grille frame is degreased to ensure proper primer adhesion.

The surface is then treated with an automotive grade rust inhibiting primer.

An automotive grade paint base coat is applied. The paint color for this step is determined by camo pattern that is being used.

The graphic film is cut to size and placed in applicator tank. Application time averages less than two minutes per piece, not including pre- and post-application processing.

The temperature and humidity must be controlled to avoid breaking down the film before application. Ideal humidity is between 40 percent and 60 percent. Exposure to high humidity results in degraded film and the inability to properly apply to water vessel.

Activator is applied to film before the grille frame is dipped. This activator releases the ink and dissolves the film, leaving the ink suspended on the surface of the water. This is the critical processing time as the part must be dipped into the vessel at an optimum rate and angle for even ink distribution and to ensure the image is not distorted or faded.

Here, the grille frame is carefully dipped in water vessel to apply finish.

The frame is carefully pulled from the vat with the pattern in place. Again, the dipping process takes less than two minutes from the time of activation until the part is removed from the vat.

Once removed from the application vessel, the grille is moved to a wash station, where remnants of the poly vinyl film are cleaned off. The finish will air cure in 24-48 hours, but this time can be greatly reduced thru the application of ultraviolet light. Temperature and humidity is not as critical during the curing process as it is during storage or application.

T-REX applies a protective grade clear coat to protect the grille's finish. grilles can be cared for as you would your vehicles factory finish and can be washed, buffed, polished and waxed with the vehicle. T-REX Graphic Series grilles come with a lifetime structural warranty and a 3 year warranty on the finish. Do not use abrasive or caustic chemicals on your grille as this will damage the finish and void your warranty. Only use products which are listed as being clear coat safe.

Hydro dipping (n.): a method for transferring printed graphics to three-dimensional surfaces by suspending chemically-activated film in a vat of water and then dipping the substrate material into the water.

Of course it doesn’t.

Hydro dipping is a fairly complicated, multi-step process that requires visual aid to understand. Luckily, the good folks at T-REX were willing to show us how the process works when producing their new hydro dipped Graphic Series Grilles.

In the automotive realm, we’ve seen hydro dipping used on valve covers, air cleaners, intake manifolds, dashboard inserts, and more. It’s been around for a while, but since hydro dipping is a specialized process, these parts are often custom, one-off pieces.

T-REX is aiming to change that.

A leading manufacturer of truck grilles, T-REX offers its customers that custom, hydro dipped look right out of the box with its Graphic Series Grilles. This full line of grilles features hydro dipped frames available in four different camouflaged patterns.

“We strive to distance ourselves from the competition,” said Tom Ameduri, senior account manager for T-REX Products, Inc. “Graphic grilles were a natural progression after the release of our super popular Torch series. With the increasing popularity of camouflaged everything and Duck Dynasty’s continued staying power, we felt the industry would be ready for camouflage grilles.”

Because of the hydro dipping and finish process used by T-REX, Ameduri says the grilles can be washed, waxed, buffed, and polished just like the rest of the vehicle. Graphic Series Grilles are available for a wide variety of applications from the 2014 model year all the way back to the 1997 Ford Expedition.

So how does the process work?

Scroll through the slide show above for step-by-step images.