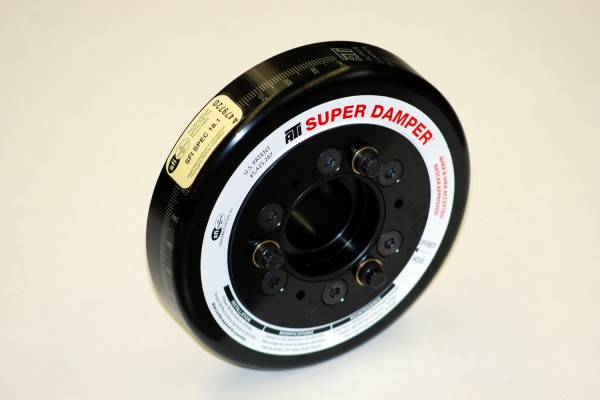 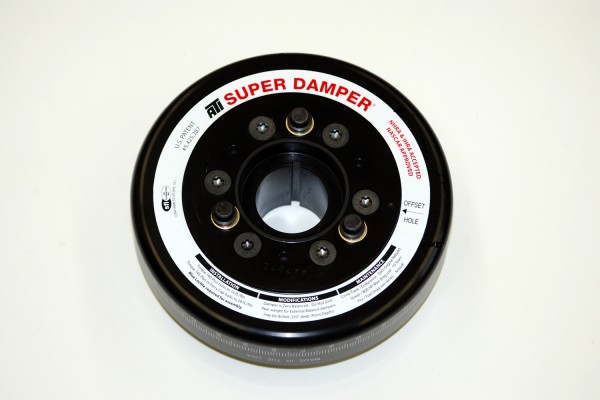 The ATI Super Damper is an elastomer style harmonic damper. Unlike OEM style dampers with a press-fit elastomer material, a Super Damper employs a combination of 70 durometer O-rings and a unique, full-captured inertia ring to dampen harmful crankshaft vibrations. Testing by General Motors has shown that the ATI damper is very efficient when it comes to displacing crankshaft twist.

This ATI damper is designed for an internally balanced big block Chevy. Internal balance units have each part of the damper balanced to within 1/10 ounce-inch before assembly. The weight of this type of damper should not be factored in when the reciprocating assembly is balanced. External balance models for engines like small block Chevy 400s and big block 454s should be balanced to GM service specifications.

The nose of the ATI damper is designed to accept a conventional three-bolt GM style pulley. According to ATI, most crank hubs have a register to locate the OEM pulley. In addition, the nose of the damper is configured to accept a 4.75-inch register for locating the Moroso style big block crank trigger wheel.

An important feature on ATI and most aftermarket dampers is a degreed hub. On the ATI model, the marks are laser-etched around the circumference of the hub in one degree increments.

If you race, you want to see this SFI specification tag on your damper. Many racing sanctioning bodies mandate SFI-certified dampers for competition. Unlike some OEM dampers that are prone to self-destruction if they’re old or worn out, an SFI-certified damper will hold together. The carnage caused by an inertia ring flying off a damper can be rather significant.

Some call it a harmonic balancer.

Others refer to it as a harmonic damper.

Whatever you call it, that big chunk of metal hanging off the crankshaft snout of your engine is essential to your powerplant’s wellbeing and performance. Its job is to absorb harmonics, so from here-on-out we’ll refer to it as a harmonic damper (its only true proper name, we believe).

Why You Need a Harmonic Damper

The crankshaft buried deep inside the engine in your car isn’t a solid, immovable hunk of steel or iron. The crank twists and bends relative to the loads placed upon it by the respective pistons and rods on each throw. General Motor’s research has shown there is considerable crankshaft deflection in a race-prepped engine spinning at 8,000 rpm.

There is also resonance to consider. This occurs when the torque an engine makes on each combustion cycle “syncs” with the crankshaft’s natural vibration frequency. Without a proper harmonic damper to dissipate the torsional vibration caused by resonance and deflection, certain crank failure and other damage will occur, including:

How Operating Range Factors In

Engines operate in widely varying rpm ranges. This operating range, coupled with the rate at which an engine accelerates, can have a considerable effect upon the harmonic damper required. OEMs design dampers that are “tuned” for an engine’s specific rpm range. For example, a damper for a diesel highway truck with a dozen or more forward gears is tuned for a very narrow rpm range. On the other hand, a Corvette equipped with an LS-series small block and an automatic transmission might operate in a very wide RPM range—say 800 to almost 7,000 rpm.

Katech conducted a harmonic damper test for General Motors several years ago. The test involved the use of four different aftermarket dampers on a 427-cubic-inch small block. From 3,112 to approximately 6,500 rpm, all of the dampers limited crankshaft twist to no more than 0.6 degrees. Above 6,500 rpm, things got interesting. Crankshaft twist increased by a considerable margin with three of the dampers. At 7,893 rpm, one damper allowed a considerable 2.0 degrees of crank twist. The second had 1.7 degrees of twist, and the third had approximately 1.25 degrees of twist. The last damper—made by ATI—allowed just 0.28 degrees of crankshaft twist.

Inside the ATI Damper

But what makes it tick?

The ATI damper is a significant improvement on the proven elastomer damper configuration. A typical OEM style single-strip elastomer damper has an inertia weight (also called a ring) with a rubber insulator pressed to the crank hub. The inertia ring can move in relation to the hub when the elastomer material wears. As ATI points out: “During the manufacturing process of an OEM damper, it is impossible to maintain the concentricity of the inertia ring to the hub. The ring must be machined after it is pressed to the hub, and then balanced after machining. When it comes loose, imbalance can and will occur.”

Even if the inertia weight doesn’t fly off, this movement often causes the timing marks to be thrown out of whack in relation to the crank keyway. That makes it tough to properly time the engine.

In contrast, the ATI Super Damper employs a combination of O-rings and a unique, full-captured inertia ring to dampen harmful crankshaft vibrations. This configuration allows the damper to actually absorb crankshaft harmonics over a wide rpm range. It is not uncommon to find a Super Damper on race engines exceeding 9,000 rpm.

Elastomer dampers have been given a bad rap since the elastomer material can deteriorate and allow the inertia ring to slide or rotate. ATI solved the deterioration problem by creating a damper with removable elastomer strips. That means a Super Damper can be rebuilt at home or returned to ATI for quick rebuilding. Summit Racing offers a replacement elastomer kit and the special set of tools designed to rebuild the damper.

The performance benefits of using the proper harmonic damper are considerable. A properly functioning damper stabilizes camshaft and ignition timing. A reduction in twist at the end of the crank also stabilizes the valvetrain. The result is more power and longer engine life.