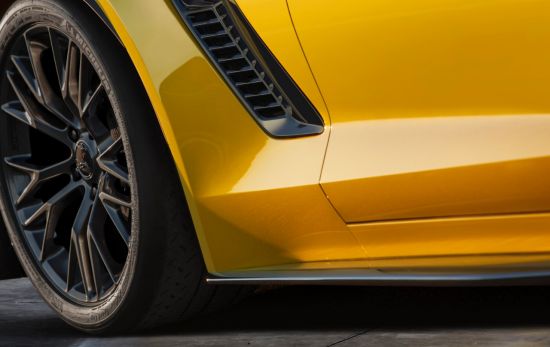 After all the Internet speculation and rumor (not to mention some really bad Photoshop work on purported spy photos), you’ll be able to the see the real-deal 2015 Corvette Z06 for the first time at the Detroit Auto Show. General Motors officially announced the new supercharged Z06 will make its debut at next month’s show in the press release below:

DETROIT – Chevrolet will introduce the 2015 Corvette Z06 next month at the North American International Auto Show in Detroit. It will be the most track-capable Corvette ever, designed to deliver supercar levels of performance through unique powertrain, chassis and aerodynamic features.

The Corvette Z06 will complete Chevrolet’s performance car lineup, which will also see the addition of the Corvette Stingray Convertible, Camaro Z/28 and SS sedan.

“Chevrolet is America’s favorite performance car brand, and for 2014 we are going to offer enthusiasts more choices than ever before,” said Alan Batey, senior vice president, Global Chevrolet. “No other manufacturer will be able to match the breath of performance cars from Chevrolet.”

Chevrolet sells one out of four performance cars in 2013

For the first 11 months of 2013, Chevrolet has accounted for about 25 percent of all performance car sales in the U.S. as Corvette and Camaro continue to lead their respective segments.

Corvette outsold its closest competitor, the Porsche 911, for the first 11 months of 2013. This is all the more remarkable given Corvette production was halted for six months as the Bowling Green, KY, assembly plant prepared to build the 2014 Corvette Stingray. In November, Corvette sales jumped 229 percent year-over-year, as demand for the new Stingray continues to outstrip supply.

One response to “GM: Chevrolet to Introduce 2015 Corvette Z06 at Detroit Show”