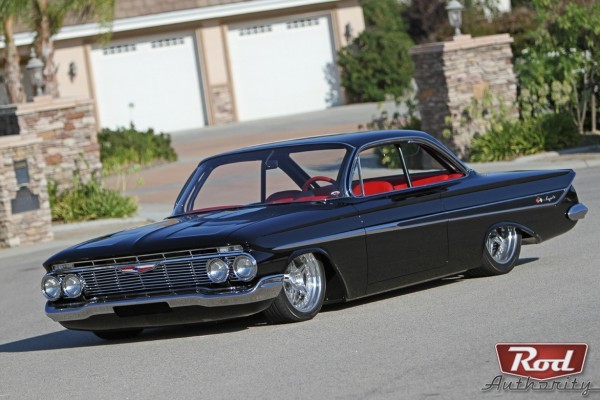 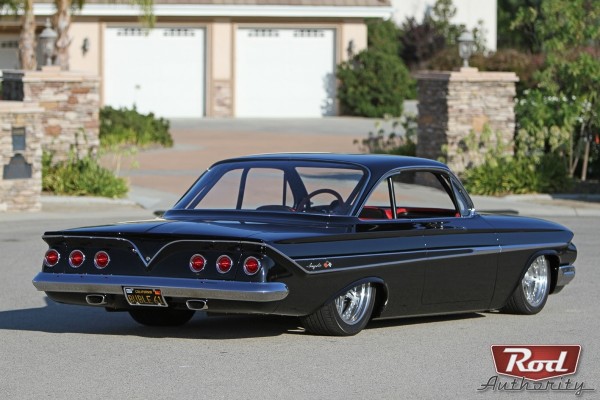 You know what we’re talking about Ford Guy and Chevy Guy.

But some cars rise above it all. Some cars are so glorious that allegiances and brand loyalty need only be replaced by common sense. By honesty. By the eyeball test.

Like, for instance, the 1961 Chevrolet Impala. Dislike it at your peril, because your credibility depends on it.

Our friends at Rod Authority shared with us Gil Losi’s newest build, his ’61 Chevy Impala nicknamed “Under Pressure.”

Waking Up A Classic Sleeper

Steve Cook of Steve Cook Creations was responsible for building “Under Pressure” from the ground up. His shop is located in Oklahoma City and both him and Gil have had a long-standing partnership and friendship seeing as Steve’s built Gil’s last four cars.

The big-bodied sleeper was usually a full-size passenger vehicle that typically catered to the family demographic of consumers. In the case of the ’61 Impala, the idea was to order the biggest factory-upgrade drivetrain available. What you ended up with was a grocery hauler by day and a land boat that had the potential to push out the mythical “one horsepower per cubic inch” with a 409-cubic-inch engine, dual four-barrel carburetors, and a four-speed transmission system by night.

Gil wanted to pursue and resurrect this identity associated with the Impala during its heyday. It could have gone either way, a luxurious family commuter or the unexpected bane to muscle on the street. Gil had this idea of creating a subdued yet menacing exterior. Any exterior element denoting an upgraded powerplant was sacrificed for a more streamlined look. “Under Pressure’s” nailed stance coupled with the DuPont Triple Black paint possessed an ample amount of intimidation in his eyes.

Keeping with the theme of creating a sleeper, the guys at Steve Cook Creations had to mock up a custom engine bay that could enclose the heavy duty drivetrain without exposing it from the exterior. Sheets of metal were rolled to create the general shape of an inner fender. The crew then used a Pullmax to hammer out curved and rounded pieces of steel to fit the contour of the turbo system and all its components. An induction wing was fabricated for the front of the engine compartment which ingeniously functioned as a path for fresh air while acting as an aesthetic tie between the front of the compartment to the inner fenders. The drivetrain itself is truly a work of engineering mastery. Mike Moran, one of the country’s most well respected engine builders, was brought on the build team to create something truly menacing on the street.

Without the twin turbo setup, the 540-cubic-inch Dart Big M produced 1500 horsepower. With the turbo’s equipped, horsepower was boosted by 500-plus. The turbo’s used on ‘Under Pressure’ are 80mm by Garrett and they spin almost 10 times faster than the engine itself. Other notable one-off engine components include an Intercooler by Ron Davis, a dry sump aluminum oil pan, and a full-custom radiator by Ron Davis as well.

Complementing the menacing stance, the perfect set of staggered Billet Specialties wheels were cut in 18- and 20-inch sizes and given a subtle brushed finish before being mounted to the Yokohama Advan Sport 225/45ZR18 and 295/40ZR20 tires. Filling the windows of the custom billet wheels, Baer 6-Piston calipers clamped to 14-inch drilled and slotted rotors handle the stopping duties.

Losi’s life and Impala are truly an inspiration. He took his build to Detroit for the Autorama Ridler competition, and despite finishing “ninth,” he keeps his head held high knowing he built the car exactly the way he wanted it.

“It was Pete Chapouris who said, ‘You get into these cars with your 70-year-old bodies,'” Losi said, “‘and you look out the windshield with 17-year-old eyes.’”

Check out the video below, courtesy of Rod Authority, for more details on the car.