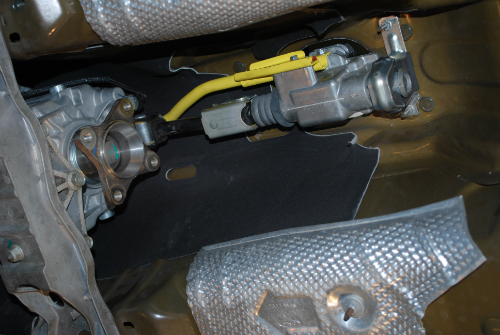 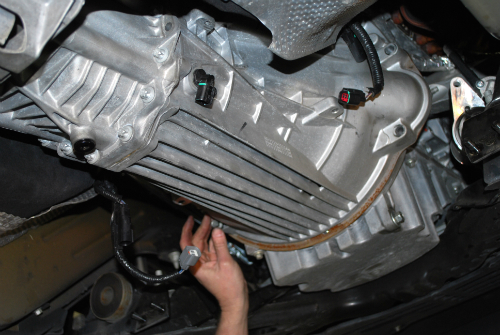 After disconnecting the slave cylinder line and clearing the driveshaft and the exhaust system from the work area, remove the shifter stick mechanism from the tunnel by extracting the two bolts and the U-clamp.

Next, remove the transmission-bellhousing bolts.

The gearbox is massive. Before you begin its removal, isolate the system by putting a transmission jack beneath the case to relieve the weight then remove the four crossmember bolts. Space is tight at the top of the bellhousing, so you’ll have to lower the engine/tranny slightly to access the bolts.

After securing the transmission to the jack, slide the assembly to the rear and out of the way.

The transmission and shifter are removed as one unit…and the unit is very heavy!

Here, the factory hydraulic slave remains in position as per production. Since this assembly is compatible with the Force 9.5 it does not require a spacer or any other modification.

Removing the stock clutch and flywheel reveals the timing ring on the crank flange and the sensor to the left. Installing the Force 9.5 does not require re-flashing the vehicle computer.

To secure the flywheel to the crank flange, apply some blue Loctite to the RAM bolts and torque to 70 foot-pounds. To ensure that the transmission will slide in easily, align the splines of the twin discs by using an accurate clutch disc alignment tool.

Apply the outer clutch disc and align it with the inner disc using the alignment tool.

Be mindful that the alignment tool slides freely back and forth while tightening the fasteners in a crisscross pattern, attach the clutch cover to the flywheel and torque to 30 foot-pounds.

Finally, replace the transmission. Use a suitable bleeder and vacuum pump to bleed the clutch via the reservoir. By applying a vacuum to the clutch hydraulics the trapped air dissolves in the fluid and evaporates at the top of the reservoir. Alternatively, continue to depress and release the clutch pedal until the air bubbles exit the system. When the air is completely evacuated the pedal effort will be consistent and positive at the top of the clutch pedal travel. Check the fluid reservoir and test the system for normal operation.

Modern V6 Mustangs (2011-2013) are 150 pounds lighter than their V8 counterparts, making them more agile than the heavier V8 models which have 15 percent more moving engine parts.

In standard trim, these 3.7-liter V6-powered six-speeds are equipped with a clutch that transmits 300 horsepower and 280 foot-pounds of torque. But what if you upgraded the power output beyond 300 foot-pounds?

RAM Automotive has introduced what it believes to be the first Mustang V6 clutch upgrades for higher-output applications. These upgrades consist of seven different types, the mildest of which is a single-disc upgrade that transmits up to 450 foot-pounds of torque; the most aggressive is a dual-disc variant that handles 1,200 foot-pounds and beyond. Of the three single-disc and four dual-disc types, each is endowed with progressively increasing clamping loads. All are direct fitment and none require modifications to the factory release mechanism. Furthermore, each is supplied with a RAM billet flywheel, either steel or aluminum. By replacing the heavy factory dual-mass flywheel with a billet unit, substantial weight savings are reflected.

To achieve the highest clamping forces (1,200 foot-pounds of torque and beyond), RAM equips the Force 9.5 and 10.5 cover assemblies with their 900-series friction discs. These metallic disc designs are used for race or high-output forced-induction applications.

But possibly the best aspect of these clutch upgrades is the price—the new clutch sets provide greater clamping forces yet cost less than the OE replacement parts. The tables below show the capacities of RAM’s new upgraded clutch assemblies for contemporary V6 Mustangs.

(Note: the factory flywheel MUST be replaced to use these clutch sets.)

To give you a taste of what’s involved in converting to RAM’s new upgraded clutch systems, check out the slide show above.

One response to “Clutch Performer: Increasing Your 2011-13 V6 Mustang’s Torque Capacity with a Clutch Upgrade”