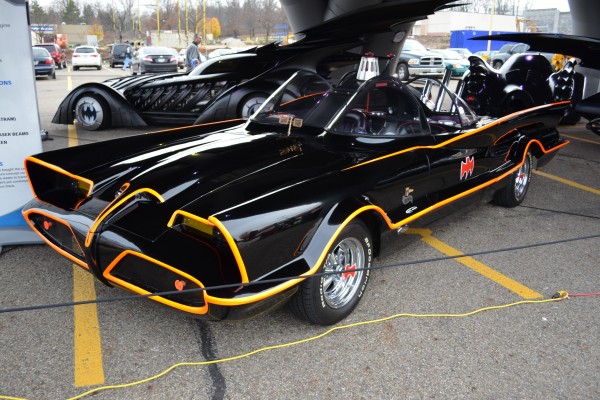 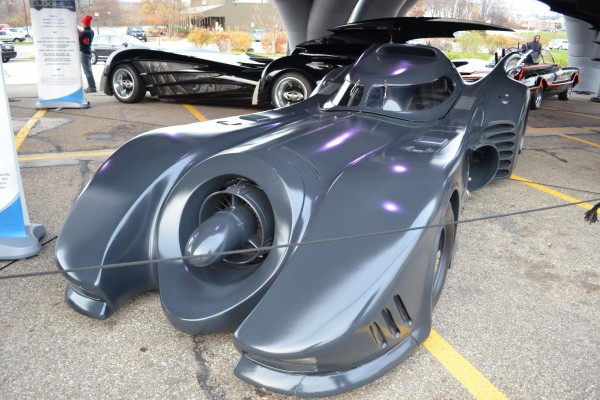 Batman (1989) and Batman Returns (1992) Batmobile, driven by Michael Keaton: Features include oil slick and smoke dispensers, twin Browning machine guns, and grenades. Vehicle can jettison its bodywork to form the Batmissile by narrowing the vehicle down to just the cockpit and turbine. (Image/OnAllCylinders - Lori Sams)

Batman Forever (1995) Batmobile, driven by Val Kilmer: Featuring a Chevy 380 engine, the full-scale vehicle was powered by a 25-gallon propane tank and could shoot a 25-foot flame out of the rear exhaust. (Image/OnAllCylinders - Lori Sams)

Batman and Robin (1997) Batmobile, driven by George Clooney: The only film version of the Batmobile that is a convertible, this generation of the Batmobile features wheel-based axle bombs, ejection seat, rocket launchers, and more. (Image/OnAllCylinders - Lori Sams)

Black Tumbler driven by Christian Bale in Batman Begins (2005), the Dark Knight (2008), and the Dark Knight Rises (2012): The first Batman vehicle not given the name Batmobile. (Image/OnAllCylinders - Lori Sams)

BatPod driven by Christian Bale in the Dark Knight (2008) and the Dark Knight Rises (2012): This self-righting all-terrain vehicle was fully weaponized and designed to give Batman a swifter mode around Gotham City. (Image/OnAllCylinders - Lori Sams)

Six Batmobiles and the Bat-Pod are currently finishing up a tour of sporting events across America to mark the upcoming home entertainment release of The Dark Knight Rises on December 4.

The tour started October 27 at Cowboys Stadium in Arlington, TX and included a stop at the LSU-Alabama football game earlier this month. It also features stops at this Sunday’s Ravens-Steelers game in Pittsburgh, PA and apparently at a random Best Buy near Akron, OH. We were lucky enough to hear about the unannounced Best Buy stop and capture some cool images (no, we didn’t receive any type of Bat Signal). Check out images (with overviews of each vehicle in the first seven slides) in the slide show above.

The tour ends back at Cowboys Stadium on Thanksgiving, when the Cowboys battle the Washington Redskins.

4 responses to “Holy Horsepower, Batman…Six Batmobiles in One Place!”