The year: 1986. The place: a barn somewhere in New York state. The players: a car-mad high school senior and a neglected but still-proud 1956 Cadillac Sedan de Ville.

Stars twinkle. Violins play. It’s love at first sight, the beginning of a relationship that will span 23 years, four makeovers, and thrill millions with freaking awesome, 20-foot-long flames. You see, this Caddy—aptly named FireMaker—is the automotive manifestation of owner Murray Pfaff’s affinity for shooting flames out the back ends of cars.

Murray is well known as an automotive designer and car builder. His studio, Pfaff Designs, has designed over 250 concept cars, bikes, and other wheeled vehicles for the likes of the late Boyd Coddington, Rad Rides by Troy, Air Ride Technologies, Pro Rides, Detroit Speed & Engineering, and Roush Racing. Two of his designs—the G-Force GTO and Sidewinder Cobra—became Hot Rod magazine project cars. Murray is also celebrated in the Detroit area for throwing nutzo Woodward Dream Cruise parties that end with an automotive immolation or implosion of epic proportions.

But we digress. When young Murray first found the Cadillac back in ‘86, it had been sitting unloved since 1971. With its barn home slated for demolition to make way for a shopping mall (savor the irony of that in today’s environment), Murray asked his father for permission to buy the car. Mr. Pfaff’s “over my dead body” response put the kabosh on the purchase.

However, fate intervened and found a safe haven for the Cadillac. Five years after dad put his foot down, Murray was able to buy the car. With help from his friend Matt Shamey, Murray dove headlong into Makeover Number One. It was a biggie, too—modifications included a Carson-style top, over 300 hood louvers, shaved handles, trim, and emblems, custom fender skirts, frenched antennas, and filled bumpers.  Murray covered the car with a mint green, monochromatic paint job; his brother Dave and a collection of friends rebuilt the Caddy’s mechanicals and got the car on the road.

And just in time, too, as Murray and the de Ville made a move to Naples, FL shortly afterward. After five years in the Florida sun, Murray decided it was time for Makeover Number Two. This one took the form of a 500-cubic-inch V8, Turbo 400, and rear axle from a 1976 de Ville. This was no plug-and-play deal. While the engine compartment of a 1956 Cadillac is large, it ain’t 500-cubic-inch-motor large. To create the required space, a six-cubic-foot wheelbarrow gave its life to become a firewall recess. The front crossmember was C-notched for oil filter clearance, and the center X-member was modified to make room for the Turbo 400. Murray also laid on a new deep jewel green top color with flame graphics.

Another move, this time to Northern California, prompted Makeover Number Three for the Cadillac. The mint green color was traded in for a deep silver poly over jewel green with purple flames. The flame job was one of Murray’s first ventures into computer design, setting the stage for his design business.

So what’s the deal with the flames? It all started when Murray was living in Florida. He began experimenting with the traditional type popper-type systems (basically spark plugs in the exhaust tips, juiced with voltage from the car battery). When that got old, Murray developed more sophisticated systems that injected a shot of fuel into the exhaust gas stream to create long gnarly balls of fire. The current setup is a two-stage system with fuel injection and two plugs per exhaust tip. It’s good for those 20 foot-long flames we talked about earlier—and we have the pix to prove it.

With so much history between them, it’s a sure bet that Murray will never part with FireMaker. However, his restless creative soul is working on a stable mate for the Cadillac. We’re sworn to secrecy on the project, but we can tell you it’s a Mopar, was found in a barn, will have a 6.1L Hemi, and—well, that’s about it. Trust us—this new ride will be an eye-popper in the finest Pfaff Designs tradition.

No flame-throwing shenanigans with this one, though. 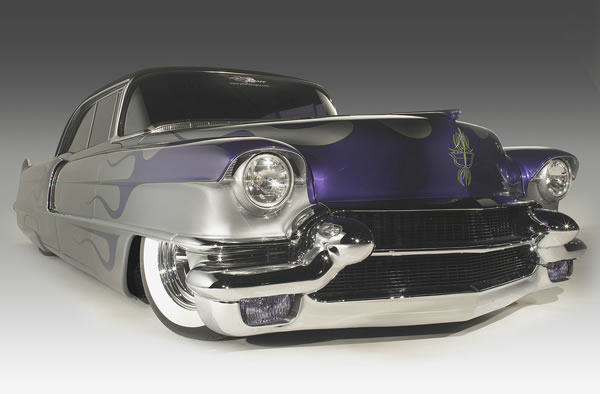 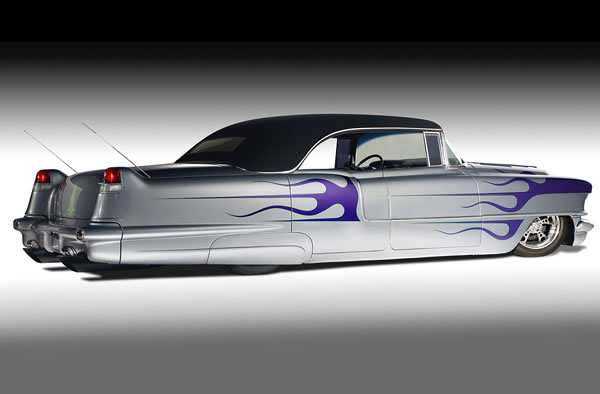 Think it’s taking you forever to finish your project? It took Murray Pfaff 23 years and four makeovers before he could declare his 1956 Cadillac Sedan de Ville, FireMaker, truly finished. High school senior Murray found the de Ville in 1986. The car was parked in a barn in 1971; many of the 100,000 miles on the odometer came from vacations to Mexico, Alaska and Florida. Murray’s first attempt to buy the big Caddy was quashed by his dad, who didn’t want some old relic cluttering up the Pfaff driveway. But patience paid off; five years and 600 bucks later, Murray held the title to the de Ville.

Believe it or not, most of the major body modifications were done 18 years ago, which goes to show you that customizing done right is timeless. The laundry list of mods includes the Carson top in black Haartz cloth, extended side intakes with modified trim, filled side skirts, shaved handles, emblems, trim, and antenna, a one piece rear bumper with 1948 Ford taillights molded into the ends, custom stainless windshield trim, and twin frenched radio antennas. This photo shows the Pfaff-designed 18” Billet Specialties rims on Goodyear Eagle F1s.

The Glasurit Ultra-Violet Purple/Ice Pearl flames and scallops over Dark Silver really pop in the late-evening light, don't they? Murray designed and laid out the paint scheme, which was expertly sprayed by Charlie Vickerie. There are over 300 louvers punched into that hood, and the Cadillac Goddess ornament has been relocated and recessed. Yep, those are BFGoodrich Silvertown wide whites on 15” U.S. Wheel Supremes. Murray swaps these on when he’s in “traditional” mode.

The interior received the lion’s share of attention during the de Ville’s latest go-round. The factory dash was heavily modified to accept the speedometer cluster from a ‘60 Cadillac; a fabricated insert has a hidden door to house the Alpine Digital Media Receiver head unit. The center console is out of a 2006 Impala, modified to fit the hand fabbed Classic Instruments gauge cluster and control unit for the Air Ride Technologies Shockwave air springs. A 1960 Caddy steering wheel sits atop an Ididit tilt steering column, and a chromed plated Beelzebub is perched on the handle of a B&M Quicksilver shifter. PJ’s Trim Shop slathered the cabin in a herd’s worth of black leather, which contrasts nicely with the purple and gray dash, door, and seat inserts.

You’re looking at 500 cubic inches of Cadillac’s finest. Back in the early 1990s, Murray pirated the engine, a Turbo 400 automatic, and the 12-bolt rear axle from a 1976 de Ville and plopped them in FireMaker. The 500 was bigger than the car’s original 365 cube engine, requiring sheetmetal surgery that included a firewall recess made from a wheelbarrow and all-new inner panels. The rebuilt long block is fortified with an Edelbrock Performer intake manifold, an 850 cfm Holley Street Avenger carburetor, and MSD ignition bits. The early Caddy valve covers are from Offenhauser, machined to fit the 500’s cylinder heads. That funky air cleaner is a modified shampoo drain off of an old barbershop chair. No, we’re not sure why either, but it’s cool.

Here’s the real reason the ’56 exists: flames. Ginormous 20-foot long flames, to be exact. Murray began experimenting with flamethrower systems in the ‘90s. He started with the traditional popper-style deal that uses spark plugs as igniters, but a jones for big flames led to more sophisticated systems that inject fuel into the exhaust tips. The current fire-thrower setup uses twin spark plugs in each exhaust tip, plus a two-stage fuel injection system that is the key to those 20 foot streams of flame. Here you see Murray demonstrating FireMaker’s abilities at the 2008 Hunnert Car Pileup show in Illinois.