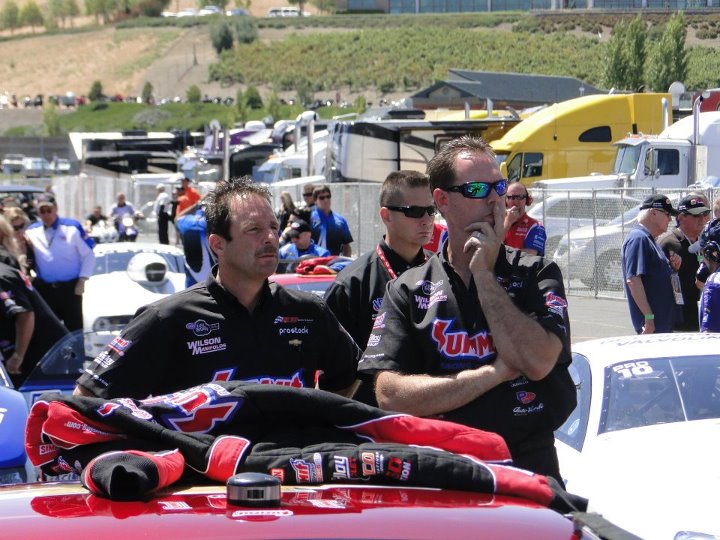 Greg Anderson and the Summit Racing team continued their strong 2012 campaign, scoring a runner-up finish in Sunday’s final eliminations of the NHRA Sonoma Nationals in Sonoma, CA. After qualifying sixth, Anderson defeated Ron Krisher, Erica Enders and Mike Edwards in the early rounds before squaring off against #1 qualifier Allen Johnson in the final. Facing the combination of an apparent performance disadvantage and a lack of lane choice, Anderson knew he would need every possible benefit in order to secure the 75th win of his career. Reacting almost instinctively to the starting line Christmas Tree, the four-time champion used a near-perfect .001 reaction time to gain a slight edge.  Unfortunately, his 6.573-second, 210.93-mile-per-hour pass fell shy of holding off us his rival’s 6.542-second, 211.76-mile-per-hour charge.

“To be honest, we made it to the final today based on some decent performance and a lot of good luck,” Anderson said. “Once there, we were in the unusual position of being the underdog, which is something this KB Racing team does not really enjoy, but that Mopar is fast right now and not making any mistakes. I know with some time and testing we should be able to gain on him and give him a run, but to do that we have to learn a little more about these Summit Racing Camaros. We’ll take what we learned today and see if we can figure out what worked and go in that direction when we get to Seattle. We’re going to keep digging until we get back to the level of performance we expect from these cars and this team.” Jason Line, meanwhile, entered Sunday’s final eliminations of the NHRA Sonoma Nationals cautiously optimistic about his chances after bettering his time on every attempt in qualifying. Starting from the fourth position, he got off to a good start, using one of the quickest passes of the first round at 6.526 seconds with a top speed 212.13 miles-per-hour to defeat Shane Gray.

It was a similar situation in the second round, as Line combined a near-perfect .001 reaction time and a 6.534-second, 211.76-mile-per-hour pass to eliminate sophomore runner Vincent Nobile, sending him to the semifinals for the tenth time in 2012. With teammate Greg Anderson having already defeated Mike Edwards in the other semifinal pairing, the final obstacle between Line and an all-Summit Racing final was #1 qualifier Allen Johnson.

Although Line’s 6.535-second, 212.03-mile-per-hour run kept pace with Johnson’s 6.532-second effort, it was not enough to overcome his opponent’s starting line advantage, with the reigning Pro Stock champion taking full responsibility.  Even so, he found reason to smile as the teams head north for next week’s race in Seattle.

“We had a shot at an all-Summit final, but unfortunately I didn’t do a great job staging in the semifinals and was late,” Line said. “It’s one of those things that happens from time to time, so we’ll put it behind us and move on.  The good news is that not only did we make our best pass of the weekend on that run, but with a race next week we don’t have long to wait to try and fix it.

“Still, it was a productive weekend. We gained ground on everyone in the points but Greg (teammate Anderson) and AJ and we kept pace with Mike (Edwards, who currently sits fourth in the championship standings), so we’re still in a good position heading towards the Countdown. We also learned a few things about our Summit Racing Camaro and are continuing to make it better every time out. Basically, we have a few races left before the Countdown starts, and we’re trying to accelerate our learning curve so we can be ready. We have a short week ahead, and a lot of work to be done.”

PRO STOCK
• Ronnie Humphrey The Genuine Hotrod Hardware driver did not race.  Ronnie is now 8th in the points standings.