Line, Anderson Gear Up for Fast Times in Houston 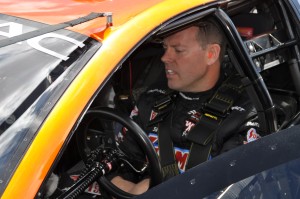 The NHRA’s Full Throttle Drag Racing Series will visit 20 different tracks throughout the course of the 2012 season at locations spanning the continental United States. Although the race distance for the Pro Stock category remains the same quarter mile at each stop, any other similarities are few and far between, with every facility having its own distinctive characteristics.

For example, Royal Purple Raceway, site of this weekend’s NHRA Spring Nationals in Baytown,TX., is quite popular with the Pro Stock contingent due to atmospheric conditions that are particularly friendly to the carbureted, 1,400-horsepower “factory hot rods”. As the primary engine builder and driver of one of the powerful Summit Racing Pontiacs, a visit to the former Houston Raceway Park appeals to Jason Line on two levels, which he hopes to combine into a winning performance.

“It’s fun racing in Houston, because there’s always the potential to go really fast,” Line said. “Royal Purple Raceway is a good air track, and the fact that it’s a high barometer is actually a naturally aspirated engine’s dream come true. Although it’s been good the last two years, there are some concerns about the racing surface this year, which is something we’ll have to deal with when we get there, and in any case, it will be the same for everyone.

“Fortunately, we know our Summit Racing Pontiac is a really good hot rod–in fact, it is now the quickest and fastest in Pro Stock history (note: Line reset the NHRA top speed record at 213.91 miles-per-hour two weeks ago in Charlotte, NC, and set the elapsed time mark at 6.477 seconds last fall in Reading, PA) and we hope to put it to good use this weekend.”

However, in order for Line to score his second win at the Lone Star State speed plant (and second of 2012), both he and his KB Racing crew will need to translate the competitive excellence shown in qualifying into round wins on Sunday. In this season’s first five races, he has been the #1 qualifier three times and started second in the other two races, accumulating a wealth of the bonus points awarded after each qualifying session. Although he has been a solid performer on race day and sits second in the championship standings, he enters the weekend determined to add to his victory total. Throughout the course of his illustrious Pro Stock career, Anderson has won an NHRA national event an average of every 3.78 starts. In a somewhat ironic twist, the four-time champion has a similar record at Royal Purple Raceway, site of this weekend’s NHRA Spring Nationals, with his two wins spaced four years apart. Having last visited theTexas quarter-mile winner’s circle in 2008, he is therefore looking forward to this year’s edition as he hopes to continue the trend and score his third win, which, factoring in his record in this season’s first five races, is a distinct possibility.

“Although we naturally wish we had won in Houston more often than we have in the past, we certainly don’t want to upset the racing gods and break our cycle there this year,” Anderson said. “After all, this Summit Racing team has had a great start to the season, winning twice, including at the last race in Charlotte and going to four final rounds. There’s no reason we can’t keep it going this weekend.

“So far this year, we’ve struggled a bit in qualifying but managed to turn things around by Sunday and have had a great car in eliminations. I’ve also been able to dodge a lot of the land mines and gone rounds, so we’re definitely doing a good job of points racing. But, as the adage says, you’re only as good as your last race, and once we roll through the gates at Royal Purple Raceway, it’s a totally new ball game, and we have to be at our best from the very start.”