Step-by-Step: Testing Out Trick Flow Super 23 Heads on a Chevy 388 Allow us to make a big giant generalization: building a dedicated drag race engine is pretty cut and dry. Since the aim is to cover a quarter-mile of straight asphalt in the quickest amount of time, you want an engine that makes its power at wide open throttle, all the time.

But build a multi-purpose engine using that formula and you’ll be building yourself a dog. When you build an engine that will see street or autocross duty as well as quarter-mile use, you want it to have a broad, flexible power curve, not one that comes alive only when the go pedal is on the floor.

That was the situation faced by Al Noe. Al’s 1967 Chevy Camaro is a fair-weather daily driver that also spends time on the autocross circuit and the drag strip. The F-body has a 388-cubic-inch stroker small block that specs out as follows:

The Plan
Al wanted to update the 388 to be more competitive on the autocross circuit while staying as streetable as possible. He came up with three specific goals:
• Add approximately 50 to 60 peak horsepower
• Ability to rev up to 6,800-7000 rpm to allow autocrossing in second gear (few to
no upshifts to third gear)
• Reduce low end torque for better low-speed exits from the corners

The basic short block was updated with a Trick Flow Track Max™ Hydraulic Roller Cam (246-degree/254-degree duration @ .050, .588-inch lift). The idea of the bigger cam was to build more high-rpm power and bleed off some low-end torque. The Holley/ACCEL EFI system would remain as well (though its limitations would be revealed in testing, as you will soon see).

The big star in the makeover is Trick Flow’s Gen 1 small block Chevy cylinder head, the Super 23 Race CNC. Here are the specifications:

At first glance, the Super 23 Race CNCs look like overkill for the 388. In fact, Trick Flow recommends the heads for engines over 400 cubic inches and pushing 600 horsepower. But remember the plan—more power upstairs, less low-speed torque. The combination of fewer cubic inches, a big cam, and high-flow cylinder heads should meet the criteria quite well.

Test One: Holley Stealth Ram/ACCEL EFI
The 388 was assembled at Trick Flow world headquarters in Tallmadge, OH, then strapped to one of the company’s Superflow dynos for testing. The engine cranked out 533 horsepower at 6,500 rpm; torque was up by 12 to 476 ft.-lbs. at 5,200 rpm. Also, peak power levels shifted up about 500 rpm.

Even before the test, Trick Flow engineers knew they were leaving horsepower on the table. The Holley Stealth Ram was restricting airflow—its port openings are shorter than the ports on the Super 23 Race CNC heads.

“The height of the (Stealth Ram’s) port is limited because of how Holley cast the fuel injector bung into the port,” said Trick Flow’s Todd Hodges. “We attempted to port-match the intake manifold to the heads by making the intake’s ports as tall as possible, but they still hung down over the cylinder head ports by about 3/16 of an inch. That is not optimal for making maximum power.”

So the 388 works on the dyno—how does it perform in the car? Even with the Holley/ACCEL EFI reinstalled, Al says the engine “pulls like a freight train!” While he hasn’t taken the car to the track since the upgrade, Al expects the reborn stroker to shave ETs around 3/10s to a half-second and boost top speed by approximately four to five miles per hour. That extra top end power will come in handy in the twisty stuff as well.

Before you get all worked up about Al leaving horsepower on the table, be assured that he will be replacing the restrictive induction system with the Edelbrock Super Victor manifold and a four-barrel style throttle body EFI setup. Those 32 extra horsepower will sure help if someone ever gives Al a triple-dog dare. 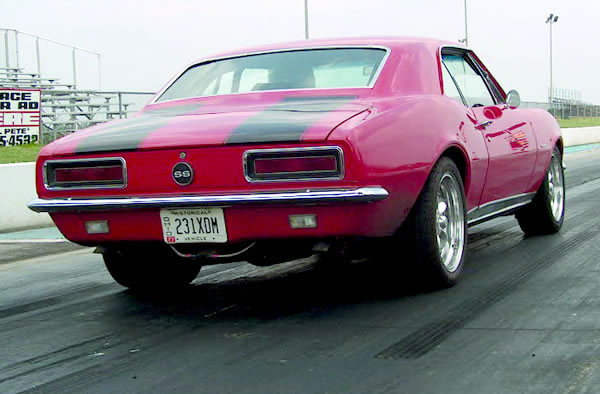 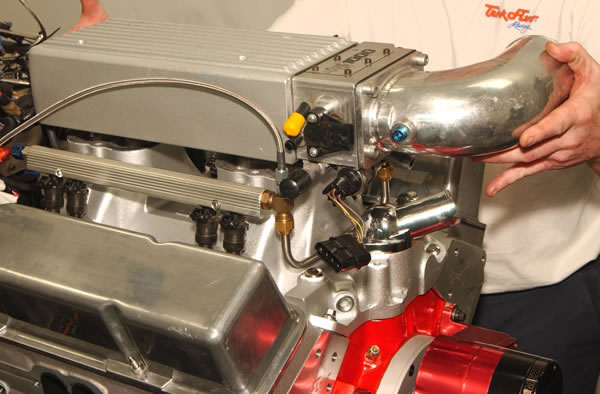 As baselined on Trick Flow’s Superflow dyno, the 388 cranked out 484 horsepower at 6,000 rpm and 464 ft.-lbs. of torque at 4,800 rpm. Looking at the curves, it’s pretty evident that the engine is a low and midrange power maker. The torque curve in particular drops off a cliff after 5,000 rpm. In this guise, the 388 is a great street engine, but not quite optimized for either autocrossing or the drags. More top-end power is called for here.

To make more power, you need to put more air into the engine. A stroll through the Trick Flow catalog yielded the extra airflow in the form of these Super 23 Race CNC cylinder heads. They feature CNC-ported 230cc intake and 78cc exhaust runners, CNC-profiled 70cc combustion chambers with 2.080-inch/1.600-inch stainless valves, and 1.530-inch dual valve springs that can handle cams up to .680 inches of valve lift. Airflow numbers are pretty stout too—314 cfm intake/257 cfm exhaust at .600-inch lift.

With high rpm horsepower as the stated goal, a big camshaft was a given for the 388. Trick Flow had just the stick—a Track Max hydraulic roller rated at 246-degree/254-degree duration @.050 and .588-inch lift. With a 3,200-6,800 rpm powerband, the cam is a good complement to the killer airflow available from the Super 23 Race CNC heads. Trick Flow recommends at least 10:1 compression and a high stall (3,000-3,500 rpm) torque converter with this cam.

After stabbing in the Track Max camshaft and bolting on the Super 23 Race CNC heads, Trick Flow strapped the new and improved 388 to the dyno. As tested with the Holley/ACCEL EFI setup, the engine made impressive power—533 horsepower at 6,500 rpm and 476 ft.-lbs. of torque at 5,200 rpm. The powerband moved higher as well, which showed that the big cam/big cylinder head idea was working.

The dyno did show the induction system to be an airflow restriction. The main problem was the mismatch between the Holley Stealth Ram and the Super 23 Race CNC heads. The manifold’s ports are too short, and there is not enough material to port-match them to the heads (the fuel injector bungs are in the way). The solution was to swap the EFI for an Edelbrock Super Victor single plane intake and a Holley HP Series 750 double pumper carburetor. The Super Victor has a 3,500-8,500 rpm powerband and an extended runner design that can handle tons of air—darn near ideal for the 388. The port openings have plenty of metal for port-matching, too.

As they say, the third time’s the charm. The 388 with its old school carbureted induction made a righteous 565 horsepower at 6,800 rpm and 485 ft.-lbs. of torque at 5,300 rpm. The engine just kept pulling into the upper reaches of the rpm band, As you can see on the graph, the spread between the horsepower curves of the Edelbrock test and the Holley Stealth Ram test get progressively larger from 6,000 rpm on up. That’s proof the Holley intake was choking high-rpm airflow.